Blu Your My Boy!

It was now lunch time as the students moved on droves to the cafeteria. Ed then met up with his coven after picking up their food and blood pack. They sat calmly down and were later joined by Elvira who had a stressed out look on her face. Ed nodded at her as he understood the situation, but avoided talking about it in public.

Elvira: Oh you could say that. To much dramarama in the early evening.

Ed: It is only with vampires and magic. We still have bullies and cliques trying to establish themselves here.

April: Only this time the rules have changed.

April: Well now power changes how you get treated. Evil Eddy here went from wimp to big dog on campus in one year so he doesn't get bullied anymore.

Ed: Yeah, so if you all work hard you can get stronger by graduation cause we are on our own at that time.

Elvira: Not to scare ya kids, but its rough out there. So some vamps end up becoming minions in covens that exist outside school like the DOD and SOD. Since you all have Gaia's Misfits now you can create your own network for after school.

Ed: That's the plan so far. If someone has trouble fitting in we can find a place for them after graduation.

April: We have big plans on making a Corporation after we graduate.

Freshman: That's a relief. Since we can't go home anymore.

Ed: Just take it one day at a time and learn what you can.

Elvira: So are you all ready for the Coven meeting?

April: Yeah as ready as we are gonna be.

Everyone then got into the conversation as they talked about their wants, needs and current levels. After lunch was over they headed back to class for several boring lectures. Once again Ed took diligent notes for his Coven since he needed to maintain credibility with the school. The last thing he needed was the DOD or the SOD causing trouble for them. On the bright side since he was considered a Prodigy who slew a nasty monster, very few students had the guts to challenge him. Not only was Ed working hard on getting smarter and stronger, but he was also making large sums of money through stock trading under Elvira's name.

After class Ed met with his Coven and Elvira in their club room to practice magic control. Since everyone's powers varied in strength Elvira and Ed agreed that control was the best direction for them to take. Ed and his very large constrictor snake named Nagi was around his shoulders as he controlled the small flow of water into various shapes and flow.

The only other person who had a Familiar in the Coven was Elvira who had Max, white demonic poodle with a punk rock look. He has a pink Mohawk and a gothy look. He seemed cute and loveable since there was no threat nearby but cross the line and Max became very dangerous. Seeing Max and Nagi was both encouragement and overwhelming to the first years since they were anxious to catch up to them. However Reagan and April were second years like Ed and still had no Familiar as of yet.

It was then that that a Blue Macaw entered the school flew through the window and landed before April. Everyone stopped and looked at April and the blue bird. April was stunned as she was not sure what to do.

The largest of all the Macaw species, the Hyacinth Macaw is almost entirely a deep shade of solid blue, with only slight patches of bright yellow around the eyes and beak. These bold and powerful birds are living proof that "size doesn't matter" -- although they are the largest parrot species, they are widely known as "gentle giants", and despite their intimidating beaks, they have a reputation for being extremely friendly, sweet, and affectionate. Those interested in adopting one of these birds should make sure that they have the free time, space, and funds necessary to properly care for a Hyacinth Macaw. While they are gentle and sweet, these birds require a lot of attention from their owners in order to thrive in a pet situation.

April: Are you talking to me?

April: Are you lost?

April: Well as cute as this is its time you go home now.

Blue Macaw: Okay but I need the key to your room. 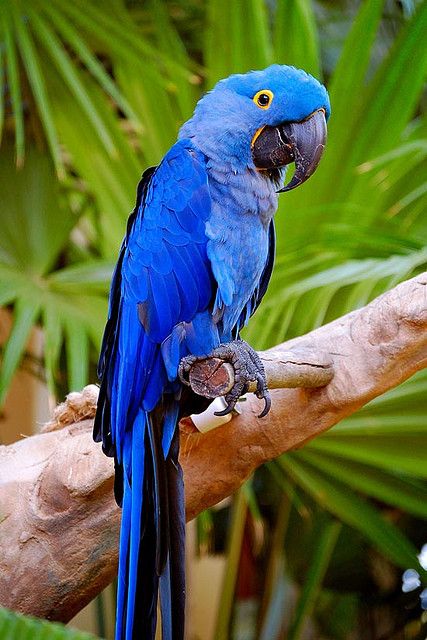 April: Lemme guess...…. your my familiar?

Blue Macaw: Give that girl a prize. So sweetheart how about we make this official by you naming me.

April thought for a moment then spoke up.

April: Blu it is.

April: Yeah lucky me. Well its better than a cat.

Ed: Well this is a good experience for you all since you got to see how you find your familiar. We don't know what requirements we have to meet since it varies per person but this is similar to how I met Nagi. Oh and Nagi no eating Blu okay.

Nagi nodded as she licked Ed's cheek. The members began to ask a lot of questions to Elvira, Ed and April for the next few hours before they headed off to dinner and then to their rooms for bed.