They had got all had gotten there just in time to heal the twins more and put them in the ground before they all had to go to ground, Liliana and Alex and Suzi slept in the spare room at her uncle Zacarias while Manolito went to his and Maryann's home for a much need personal time before they went to ground, by the time dawn hit they were all exhausted and were in the ground sleeping peacefully

Liliana awoke before everyone and decided since it had been a while since she was on the farm she would go out into the field that connected all the properties, the one they use for sparing. She dressed in her old sparing clothes and her favorite weapon, she was glad no one was up the outfit was made for one thing, agility not modesty 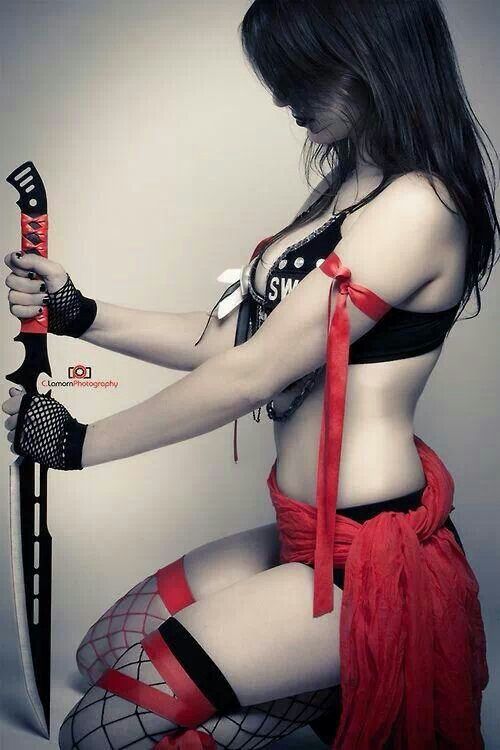 Donny woke up and decided to go take a walk. After the hell the Jan had put him through, Donny felt like he was the one with a hangover. He walked out of the house and saw someone in the practice field. He walked up to them.

Startled the blade went right to his neck in a swift moment, stopping just inches away from the skin "hasnt anyone taught you not to sneak up on people with weapons?" she said not lowering it "who are you?" she said in a interrogating tone

"I'm Donny," he said. "My family and I are visiting my Aunt Jamine and Aunt Juliette. Now, who are you?" Then, he noticed her mark. "Whoa! You're a Dragonseeker?! That means we are related!"

"Why?" Donny asked. "Hey you still haven't told me your name."

She tackled him and covered his mouth, she landed on top of him "I swear to go if you wake anyone one up with your loud voice you will become my new sparring dummy" she said in a low tone, they were both hidden by the tall grass

He growled and threw her into the open. "You can't threaten me! I don't even know who you are!" He tackled her, getting her weapon away from her. "Tell me who you are and why you are in De La Cruz Territory!"

She growled and rolled them using her legs until she was on top "whats it to you! and who are you to demand anything from me!" she said punching him hard in the jaw making his head turn

Normally, Donny wouldn't hit a girl, but he made and exception. He punched her in the gut, grabbed her head over his shoulder, and threw her to the ground, making her land on her back hard enough to knock the wind out of her.

"I just wanted your name!" he said. "And the reason why you are at my family's ranch!"

"And I just wanted you to keep your voice down!" she said grabbing his ankles and lifting her leg and kicking him right in the chest hard enough to make him fall back gasping

He rushed her and threw her to the ground. He sat on her in such a way that she couldn't move. He didn't hold back his punches. He hated being shown up, and he wasn't about to let this stranger get away with it.

"God damn it!" he yelled, holding himself.

He began coughing, blood coming out. It was hard for him to breath with the pain.

With a groan and wiping blood from her mouth she quickly went in as a white light and healed the worst of the damage but left enough he still hurt, once she was back in her body she looked down at him "now ....will you keep your voice dow..."

He grabbed her by the throat and slammed her into the ground, making her see stars.

"Just tell me your name, you idiot!" he yelled.

He grabbed her legs and caused her to fall to the ground to her stomach. He grabbed both her feet in one hand and used his body to hold her down with her hands pinned beneath her. He smiled, knowing she couldn't move.

"I just wanted you to tell me you name!" he said. "I mean, god damn it! You are coming to my family's ranch and I don't even know who the hell you are! Visitors usually introduce themselves! But no! You had to go all Bitch-zilla on me!"

"I asked you to simply be keep your voice down if you would have done so you would have had my name by now and this is my families ranch so fuck off lizard boy!"

Donny roared and had to jump off of her, changing in mid-air, looking like he was contorting painfully. He became a dragon of pure rage. When he landed, her spewed fire, unable to discern friend from foe. Half the field was on fire when he spotted Liliana and charged at her.

Liliana change mid-air meeting him, a sonic book echoed the field as the beasts bodies collided

Donny scratched her, trying to tear her wings to make her go to and stay on the ground. With anger ruling him, he was more man than beast. He pushed her away before they could crash. He charged at her again, even angrier than before because he hadn't debilitated her like he had planned. That's when she noticed he was slower than before because of his anger.

Liliana dodged his attacks knowing if he landed one it might be fatal,while dodge she landed deep cuts to him, wearing him down even more, she needed to end this quickly forr both of their sakes, she could see he was not use to his dragon and was not in control of his beast very well which was dangerous for not just her but their families as well, she tackled him in mid air using her right arm to push his head back while she tried to bite his right wing to get him to go to the ground

Donny bit deeply into Liliana, tearing a large chunk from her shoulder. He struck again, aiming for her neck. His teeth punctured deep.

Lilinanas dragon roared in pain, her strength fading fast, she used her tail and stabbed him fast and multiple times in both wings, making them both plummet to the ground and making his dragon unable to take flight if she died

Donny pushed away from her just as they crashed to the earth. Alex ran to Liliana, fear beating at him. Manolito and Zacarias ran in to inspect Liliana and Donny's wounds. Donny changed back into his human form, having been knocked out.

"This is a fine mess they've made," said Manolito, putting out the fire.

Liliana's dragon moaned, the beast taking shallow breaths as it slowly changed back into Liliana's form, Liliana was on her back, her body shivering and convulsing as she struggled to breathe, her arm was hanging by a thread and she was missing a good chunk of her shoulder that went as far down as the top of her breast, her neck was open and the sound of her choking on her own blood echoed the field as it shot from her mouth as she coughed

Manolito acted fast. "Alex, grab hold of her spirit and don't let go! Zacarias, I need you! She's dying!" He put pressure on the wound and cleared her air way, breathing for her. "Stay with us, Lil!"

Alex took her spirit into his keeping, even though he was losing hope fast. He didn't let it show and didn't let her feel it. She had to live. There was no question. As hopeless as he felt, he knew her uncles wouldn't let her die and he wouldn't let them down.

"You got this, warrior woman," Alex said, adding his aid. "You can cheat death. You're the strongest person I know. Now don't let go!"

"Save your strength," said Manolito. "Zacarias, we need a healer! Call to the nearest healer we have!"

Zacarias was too shocked to move as he looked and her body, it took Manolito calling him a second time for him to wake up and send out the call as he rushed to her side.

There was so much blood that everyone around her was standing in it, Liliana's breathing suddenly came to a halt as she choked one last time on her blood and her heart stopped, her eyes going lifeless

Alex held on to her spirit for dear life. Manolito began giving her mouth to mouth while Riordan started to do chest compressions, even using their link to force her heart to pump. Colby ran to her cousin, crying. She took over for Manolito, who went into her body and cleared her lungs from the inside. He had to cauterize the wounds on her neck so that she could breathe without blood filling her lungs. After what seemed like hours, they heard her take a gasp of air and her heart beat on its own. It was still too slow, but the relief that went through everyone, even those in the Carpathian Mountains, was so great that many collapsed as the tension drained out of them.

Rafael went to Colby and made her look away and cry into his chest, Zacarias took over the healing so Manolito could rest "we cant move her yet.....someone quickly go and gets the best soul we have" he said before e went into her body as light

"blood...we need blood" Rafael said not even sounding like himself

"No, you will need blood as well," said Manolito when he finished feeding from MaryAnn. "Nicolas and the others will hunt for us so that we can keep her alive. Zacarias, we will need Solange." He knew that Solange's blood was special, allowing them to say out during the day. "She can help us keep Liliana alive."

Jan brought a large sack of what appeared to be flour, but when he opened it, inside was soil from the Carpathian Mountains. He began making patties of it for Liliana's wounds by mixing his saliva and herbs into it. He placed them carefully, trying not to cause any pain, for which Alex was grateful.

Liliana made no sound but her body convulsed when the soul was placed and he touched her wounds, suddenly with a sickening gurgling sound her world started to bleed again covering the soil and jans hands in her blood, Zacharias slammed back into his body breathing heavy "dammit she is hemorrhaging! Manolito I need you to go again, ill call solange and feed and do the next round" he said and quickly left to do so

Manolito took over. Alex tried to help her calm down.

"It's alright," he said soothingly. "We need you to stay still, warrior woman. Help is on the way. I know it. We won't let you die. I need you beside me. Where you go, I will follow." There were cries of denial even from his homeland, which he ignored. "I want you to see our daughter grow up into a beautiful woman, like her mother. I want to see you fight again, because it's like watching the most beautiful dancer in the world. But you have to stay holding on."

Suddenly to everyone's amazement and dismay they heard a sizzling sound around her neck, blood sweat dotted her forehead as she pushed herself to help cauterize her wounds, Alex would feel her spirit leave him and the sound stopped