Balar scrambled to his feet and considered the old mans words. "Not that I know of.." he began and then he saw Tiella standing there alive. She gave him a small smile and a nod and he ran to her throwing his arms about her fiercely. She returned the embrace laughing at his exuberance. Seeing the Raven nearby Balar began to shoo it away but Tiella grabbed his wrist so hard he cried out in pain.

"No!" she ordered and then calmed herself releasing Balar, "The animal is welcome. Luna has adopted the creature." Balar looked between the bird, his wife and Luna in confusion but before he could say anything further the dragon roared once more.

"ENOUGH OF THIS MORTAL FOOLISHNESS! ANCIENT ONE YOU SEEK A PATH TO ASGARD AND BUT ONE NOW REMAINS. YOU WILL SEEK THE CHARIOT OF FREYA IN THE GARDENS OF VANAHEIM. I GRANT THEE THE GIFT OF PASSAGE."

The dragon spread its wings wide and beat them against the frozen air. Breathing deeply it then stretched forth it neck and released a deafening roar across the lake. Almost immediately a mist began to rise from the waters, thickening as they watched into a billowing fog.

"What is this?" Balar demanded.

"He is raising the Íslendingur." Tiella said quietly as she stared intently into the fog as if seeing something the others could not.

The sound of something huge moving thought the water could be heard now and a vast dark shadow began to loom ever closer through the fog. Soon it became apparent that it was a huge longboat, its timbers black and rotten and long tangles of dripping weeds strewn across its hull and deck. It appeared the dragon had literally called the vessel from the bottom of the lake, but that was not what grabbed their attention as the ship came to rest in the shallows of the lake.

The long ship was occupied. It's ore men were sitting in place, its captain standing at the helm. They were all Draugr.

The undead captain of the Íslendingur raised a hand the dragon bowed his head in recognition. 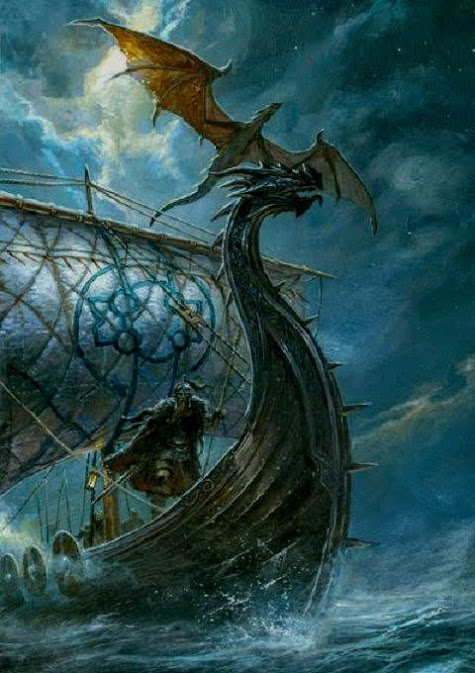