Death is only the Beginning

“Burn it,” Caligari suggested as she stared down at the broken shell of Hela. A dead body once grand in size and appeal, now mutilated and severed in twine. The witch stepped back to avoid the spreading pool of dead, tainted blood leaking from that huge carcass and looked for some scrap of cloth to wipe clean the sacrificial blade she’d used to cut out the goddess’ heart.

“Her mother was a jötunn, by the name of Angrboda unless I’m much mistaken.” Cali was examining her own hands as she spoke absently to Erik. The swollen knuckles and wrinkled flesh were gone, replaced by the youthful extremities of her body from the living world. Even her voice was clear and tight, gone was the warble and mature timbre. The pieces of black leather that had been her clothing, that had been stretched unseemly to accommodate an elderly woman’s waning physique was now disconnected sections of dark shrouds, fabric so fine it was little more than a flimsy veil hanging low on her hips and high upon her chest, revealing bare flesh and intricate tattoos engraved across her abdomen. It had been decades since her last true bath and longer still since she’d paid any attention to brushing or preening herself, but here she was, young and beautiful again, without the blood and grime that had covered so much of her body before. The nails on her fingers were long and groomed as was the sheet of inky black hair falling about her pale shoulders. The bone and feathers of her darkened headdress were supplanted by splendid silver spikes that crowned her head. 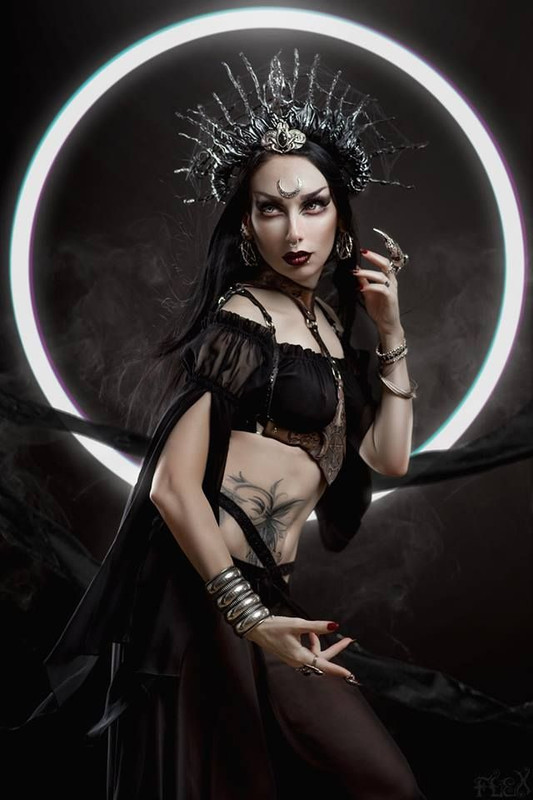 Caligari looked up at the beautiful gardens and smiled through dark red lips. She breathed in the fragrance of spring flowers and even picked one to tuck behind her ear. The Winter Witch beckoned to the party and announced:

“Bask in the warmth,
let it soak into your bones.
Congratulate our victory,
the great evil dethroned.

The Queen of Hel,
Goddess of Death,
Collector of Souls,
has drawn her last breath.

Gather unto one,
Convene unto me.
The tear between realms,
Rents in one, Two, THREE!”

Meanwhile, in the longhouse back in the realm of the living where the party’s bodies lie, changes were revealing themselves upon their sleeping forms. Already Majvoc had disappeared without warning; there one moment and gone in the next. And Miles Crow seemed to have faded away long ago, though no one could say when, why or how. It was as if he simply lost interest in existing and ceased to be. The party scarce recognized his presence or later his absence and perhaps they were to blame for Miles’ departure. The dwarf woman, Dyvia now had a belly swollen with child, an unnatural gestation borne of an unnatural sire. The blue-eyed elf lay in a pool of her own shadows, swarming around her cot like a restless tide. The big man, Balar looked tired and worn despite his rest and age marks worked their way across his face. Then there was the dark witch with flesh pale as the elf maiden’s, though decorated by black and verdant symbols that had rearranged themselves into new emblems or motifs. Her ratty hair and sullied skin were now pristine as were what passed for clothes.

About all of the sleeping party was the look of fast approaching wakefulness.

Continue story
< Prev : Shadows move Next > : The Calm before the Storm