Don't Fall Asleep in the Dark

Zelda paused in her practice to massage the joints of her toes through the satin of her pointe shoes. They allowed her as a dancer to appear weightless and sylph-like on stage, but they were murder on the feet. 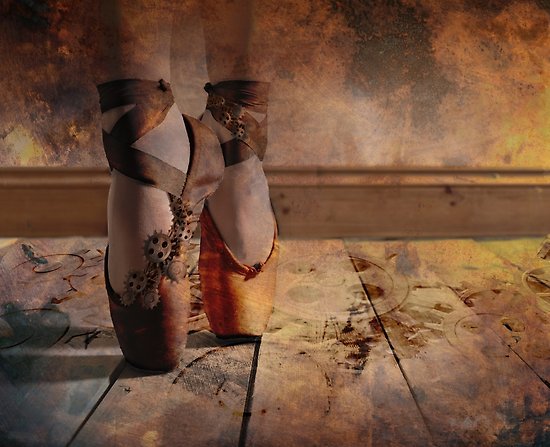 As she rubbed her feet the quiet that had settled upon the theater became oppressive. She looked out beyond the stage into deep darkness. Most of the lights were shut-off and in the resulting obscurity the far recesses of the theater disappeared. It was not uncommon for her to practice well into the evening, certainly longer than most of the other dancers, but she was rarely out on the stage so late as to be entirely alone.

There were, after all, many members to the ballet troupe and just as many men and women, often working in the background, responsible for the set pieces; artwork, props and construction to facilitate storytelling. To be honest, since the theater had reopened many of the support staff had not returned and those who now did the artwork were decidedly subpar. But Zelda was equally as hard on herself, finding her portrayal as the lead in the latest production of Jardine Secrète to be lifeless and uninspired. She decided she would indulge her self pity just this once and call it a night even without getting the choreography right. She sat down upon the edge of the stage and untied the ribbons, unwrapping them from around her ankle and slipping the shoe from her foot. She did the same with the other and examined the pair with a sigh. They were worn out and would need to be replaced, again. She had been hoping to get two days practice from each pair, but they just did not hold up. Nor were they designed to. 8-10 hours was all the toe box and resin were intended to last during heavy use and between yesterday and today she’d been in them for well over 12. She had a new pair for tomorrow, but those would not last beyond Thursday and the ballet was to be performed Friday. Gods, she hated being poor; struggling as she was to find ways to pay for the supplies she needed to make her art. It was an undue strain on her focus and her time and she just hated being poor. Why couldn’t she have been born to Highholm parents? And she instantly regretted the thought even though she thought it many times in a day.

Zelda dumped the shoes, which were little more than slippers, beside her onto the wooden stage. She reached up to pull her hair down from its tight bun and it fell in dark waves. The tiny woman laid back and breathed out heavily, relishing the relative comfort. She stared up at the ceiling high above; the rafters barely visible in the low light. After a time her eyelids grew heavy and she must have fallen asleep because she woke with a start, having the unpleasant feeling someone were watching her. More of the lights had been doused and for the first time in a long time she felt a fear of the dark. Behind her one of the door’s from the stage was ajar and it’s light, meager as it was, bolstered her nerves. She climbed to her feet and remembered to collect her shoes, but they were no longer there. It was too dark to see much or conduct a proper search and anyway they were worn out, destined for the trash or sadly, recycling. But why would anyone take them. Who would take them?

The Prima ballerina spotted something shiny on the floor where she had expected to find her pointe shoes. She bent (always at the waist) and picked it up. It was some sort of card or envelope, but she couldn’t discern any more in the dark. Zelda spared one more glance around then quick stepped towards the light vowing never to rehearse this late again.

Continue story
< Prev : All work and no play! Next > : Let the Broken Eyes Perservere