"And the second angel poured out his vial upon the sea; and it became as the blood of a dead man: and every living soul died in the sea. Revelation 16:3"

Dead fish decorated the beach. Silver scales reflecting the morning sun, while here and there the larger, darker corpses of sharks and dolphin could be seen contorted in the last throws of a painful death. The breaking waves frothed around them thick and red. The bloody maw of an endless red ocean.

Sara stooped to tip over the carcass of a crab, noticing its legs and claws constricted inwards as if trying to close in upon itself.

"Algal blooms are not poisonous, this makes no sense." she murmured as she poked the shell and pincers with the rubber end of her pencil.

The crunch of wellies on pebbles sounded beside her and she looked up to see Ben standing there camera in hand. He looked pale, and from the bags around his eyes he had not slept. Sara brushed a strand of blonde hair from in front of her glasses and straightened to stand next to him.

"No Cephalopods." Ben mused as he stared off into the distance and took a few random shots with his camera.

"No what?" Sara asked as she walked a few steps ahead to get a better look at a huge mound of something being washed ashore several hundred meters ahead. She began to stride towards it.

"Cephalopods." Ben repeated as he followed her, "Squids, octopus and the like."

"Should there be?" she asked as she scribbled the word Cephalopod onto her note pad.

"There's everything else." Ben remarked. They could see the shape in the water being washed ashore now.

"A basking shark." Sara commented as they stopped to see the discolored ocean drive the corpse ashore. From beach to horizon the water was blood red, and it was the same everywhere. The sun had risen that morning on an ocean of blood and beaches littered with corpses. Ben and Sara were not the only visitors to the beach that morning, there were others picking over the pebble graveyard and as the day wore on more would come.

Bens radio crackled as he tuned it again, and the two listen for a few moments as the local news network gave the latest update,

"...global catastrophe. Appears at first glance that every drop of salt water on the planet has been infected with the complete extinction of all know sea life."

"Except for Cephalopods." Ben observed.

"We break for an incoming report now from Mill Bay South Devon where residents of the local village of Salcombe are reporting that something is moving in the water."

"That's just a few miles from here! " Sara started running towards their jeep. The words South West Press, emblazoned on the side. They jumped in and with Ben taking the wheel were speeding towards the nearby beach. Sara tuned the car radio in to keep up with the report.

"...appears that boats are being dragged under and we have unconfirmed reports of... tentacles." The reporter laughed, "Are we sure of this? it's... yes apparently..."

Ben turned off the radio.

"Hey what are you doing?" Sara demanded.

"I do not want to bias our reporting. Besides, it sounds like bollocks." he replied without taking his eyes off the road.

"So does the entire ocean turning red and all the fish dying... everywhere."

Ben shrugged and put his foot down. Several minutes later they came to a halt in a cloud of sand at the top of the beach and wasted no time in getting out and making their way down towards the water.

They stopped short as they saw not only the now familiar littering of dead marine animals but also the complete carnage in the bay. Boats were splintered and smashed everywhere. Some of the larger vessels were burning or in the midst of sinking. It even appeared that something had attacked the docks of the village on the other side of the bay.

"What did this?" Sara gasped as she took in the sight.

"Are they..." Ben pointed towards the bodies on the beach. Not fish this time... people. Bloody and dismembered.

Sara screamed and clutched Bens arm, who doubled over and vomited into the sand. It was then that they saw it, rounding the nearby cliff edge. Its massive torso emerging from the water, almost man like but vast and grotesque... and the head, as large as a house and snaking out in every direction barbed tentacles. It was a thing of nightmares and shadow, a creature from the dawn of myth and legend... a god.

"Cthulhu." Ben whispered in awe as he dropped to his knees. The eyes of the god were upon them now, red and blazing. The arm reached out. Sara tried to run but it was too late. She heard Ben cry out, or was it her? She was being lifted then, impossibly high into the air and the last thing she saw were the tentacles. They whipped around her thick with putrid slime and blood of previous victims. 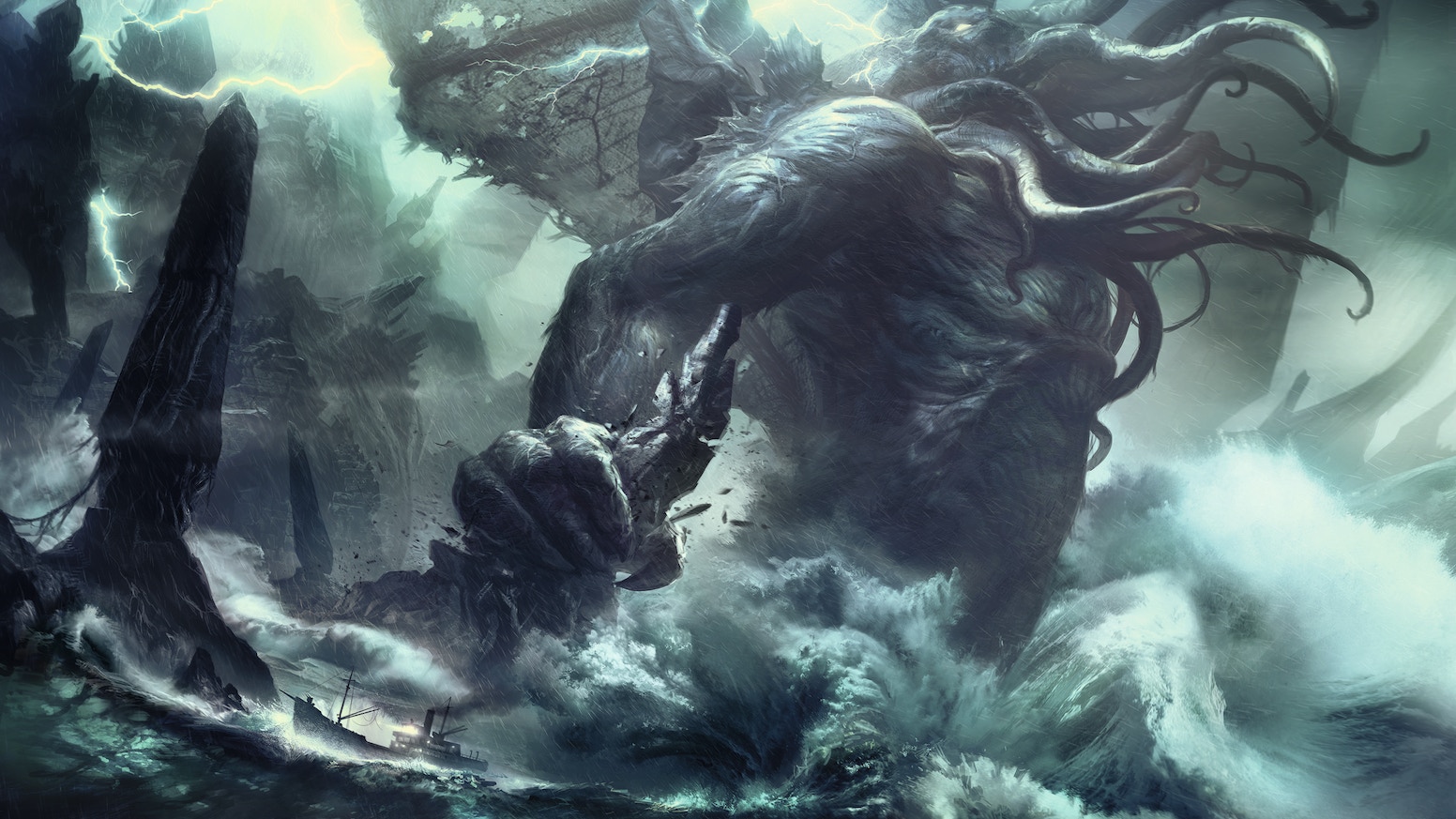