Browncoats Unite: Back to the Black (A Firefly Tale) - a play-by-post rpg

The Firefly-class transport ship is a series of Multipurpose, Mid-Bulk Transport boats designed by Allied Spacecraft Corporation. The hulls and engines are constructed at ASC's shipyard at New Burbank, Osiris, with final outfitting being outsourced to a dozen smaller companies, including the newly formed Firefly Ship Works on Hera. That’s all old news.

All Fireflies feature a large rear engine module, wing-mounted engines capable of vertical takeoff and landing (VTOL), a centralized cargo section and raised forward section holding the crew quarters and bridge. The original Firefly series was approved for production in June 2434, with the first boats being completed in February 2435. So there’s your history lesson.

The Series 3 featured a number of improvements over the earlier models, notably the extenders below the wings of the ship to stabilize the rotating VTOL engines and hold them further from the main body of the craft, which keeps the ship from shaking as much as previous series and allowed for shuttle bays to be built into the sides of design above the wings. The VTOL engines are normally rotated to provide vertical or forward thrust but have a 270° range of motion. The exhaust can be pointed forward to provide reverse thrust. While not their normal operation, safeties can be disabled to enable each engine to be rotated independently, allowing for tighter turns than is possible with most propulsion systems. It looks really neat when we do this, but anything ain’t strapped down gets thrown everywhere. You will spill your drink even if it’s your first one.

Also, the Series 3 is longer with an extended 'neck' and generally roomier interior. It again uses the more reliable Trace Compression Block engine rather than the Gurstler engine used in some other designs. So there’s that.

The Firefly Series 4 was approved for production in January 2513, with availability projected for July 16, 2513. The Series 4 is 25% faster than the Series 3 and has twice the range. The main hull is significantly wider than a Series 3 with two side-by-side main cargo bays in the main section. Aft of this section the secondary cargo area is also larger accommodating proper passenger staterooms or a larger number of berths. The boat also has room for twice the crew of a Series 3.

The larger amount of crew space has allowed for the addition of a dedicated land vehicle bay, a cargo elevator and a small hydroponics garden. The main cargo section is modular and can be adapted to pick up and drop off standard cargo modules without anyone entering the cargo bay itself.

With the increased size and capability comes a higher price tag, primarily for operating expenses. The increased cargo / passenger area is necessary to take jobs to maintain upkeep on a Series 4. This type is primarily used on the lucrative routes between the Core and the Border. For captains traveling the Rim and more interested in economy of operation, the Series 3 remains the better option. But I don’t have a series 3, I have the series 4 standard version 03-K64-Firefly produced for the civilian market, which is what I do my Captainin’ on, which is why she don’t have lasers and photon rockets. Civilians don’t get lasers and photon rockets. 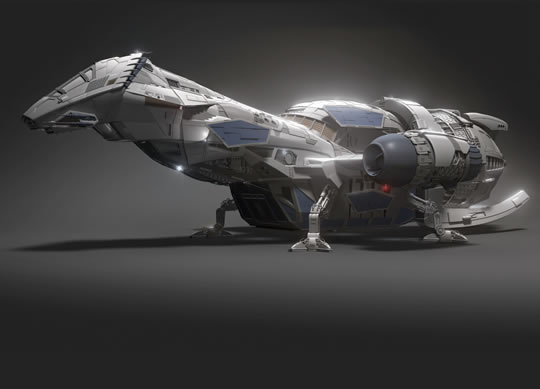 Trace Compression Block Engine:
The Trace Compression Block is the type of engine utilized as the main power plant in the Firefly-class transport ship. Apparently far superior to the high-quantity, low-quality Gurstler engine. One assumes that the oft-mentioned Compression coil is a key part of this style of engine.
--
The aft alternator is a device that supplies power to the rear section of the ship, including the engine and Grav Dampener.
--
The compression coil was a device necessary to run the main engine of a ship, including the gravity thrust, power plant and life support. The compression coil rotated as part of the main engine.
--
A catalyzer was a part of the compression coil that made the engine turn, generating power. The catalyzer and the coil rotated as part of the main engine. There are separate catalyzers on the port and starboard side of the ship.
--
The G-Line was part of a Trace Compression Block engine. Our mechanic is sure of that much. Presumably "G" stood for "gravity" since thumping on it real solid like was how it got rerouted to get the Grav Boot back online when things got real floaty. We don’t like things floaty on this ship.
--
The Grav Boot was part of the Trace Compression Block engine too. Mechanic said so. It involved the artificial-gravity and anti-inertial portions of the system and, if non-functional, meant that the ship couldn't fly safely. As long as it flies is all I care.
--
The Grav Dampener is a device of the Trace Compression Block engine which is necessary for the pitch and yaw of a spaceship. There’s a filament in there that’s real easy to sabotage; means my ship don’t steer. Don’t ask how I know this. It is likely powered by the Aft alternator.
***I did overhear a fancy Engineer whose advice I couldn’t afford mention the following: “Given the name of the device, it is more likely that this component reduces the effect of gravity and inertia on the ship and crew. If this is so, the ship could still turn, but doing so would likely damage the vessel and potentially harm, or kill, the crew.” If that’s the case we’ll just disable the failsafe which has disabled navigational control, but only in the event that this device is damaged. We don’t disable failsafes just cause it’s a Monday.***
--
Fuel cells are the main source of power for the Trace Compression Block engine used by the Firefly-class transport ship. Even our bogus deckhand knows that. 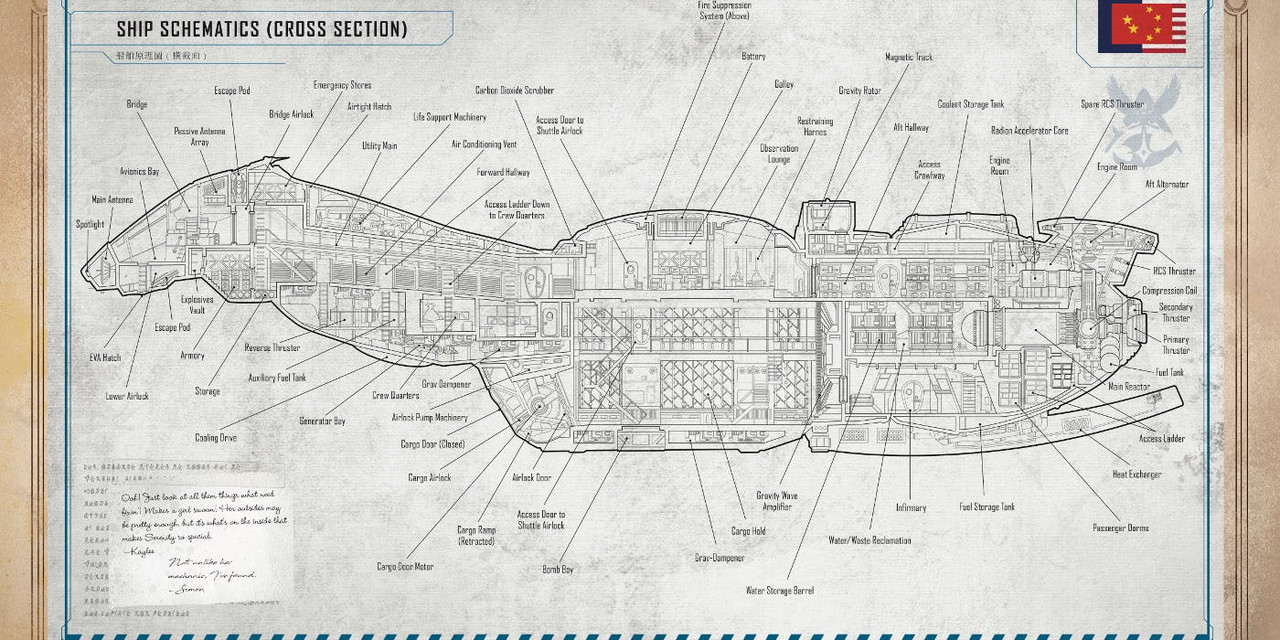 While the at ship at first glance looks like the ship from the TV show the class 4 Lunar Veil has some fundamental differences. To ensure consistency we’ll go over them here! Enjoy! 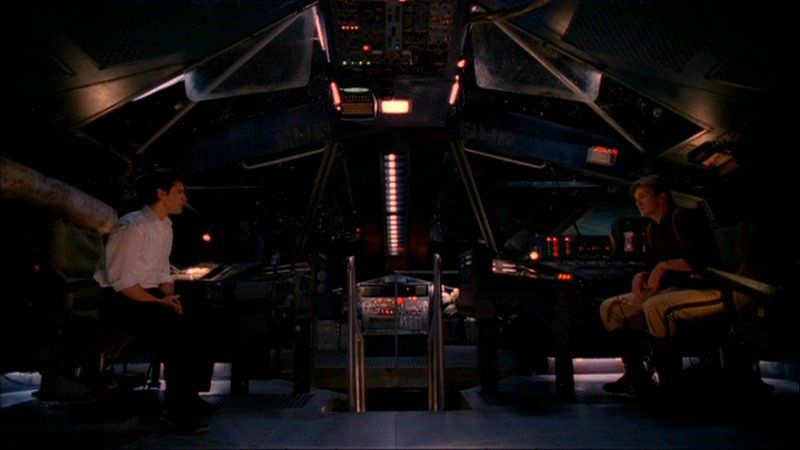 The bridge is spacious with a pilot and co-pilot seat. Lockers are filled with emergency equipment and Flight crew gear.
Pilots' chairs on the bridge and in shuttles with Boeing's style signature sheepskin covering. (Space sheepskin at that) Boeing-style control yokes, throttle quadrants in the engine rooms and shuttles.

Located underneath the cockpit, it can be accessed via the cockpit or Forward Hallway. Non-personal weapons are stored here. Access is limited to the Captain, Flight Crew and Crew Chief. 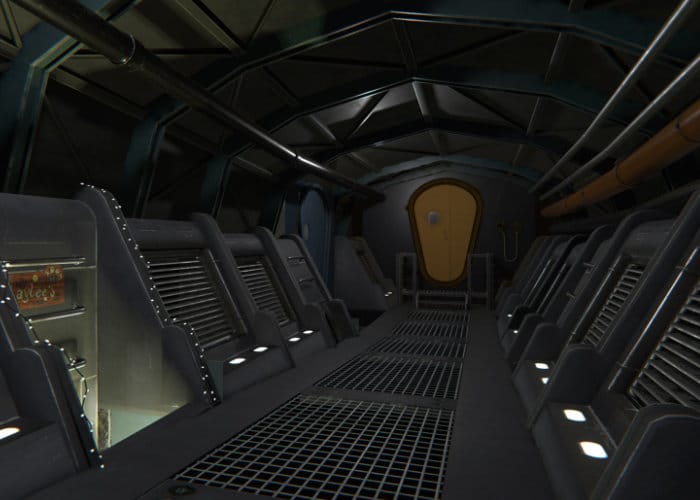 It lies between the cockpit, Armory and Galley. There is also stair access to the Cargo Bay. This also contains crew quarters, two double sized and three single crew quarters. 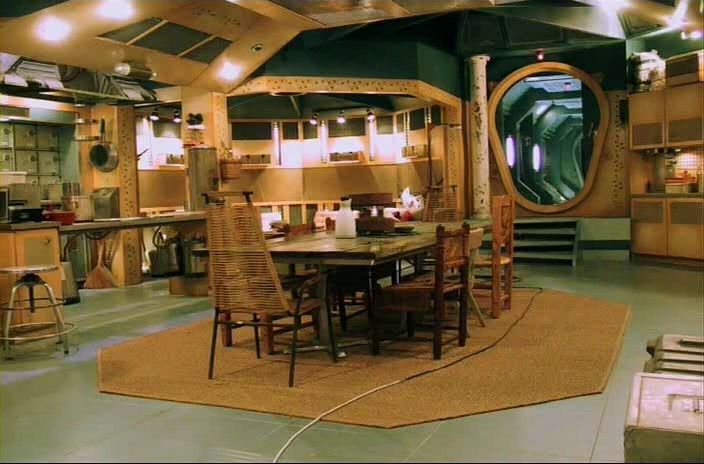 This is where you start to see some major differences in the class 4 vs class 5. The Galley is expanded with more room easily able to fit two tables, three if you really cram it. The kitchen is larger with more storage and tools for cooking. The lounge is expanded to accommodate more people and there is direct stair access from the galley to the lower lounge.
The glaring difference is the addition of a hydroponics room. Giving the long-range capabilities of the Class 4 the Hydroponics room allows the crew to grow fresh fruit and vegetables to maximize flight time. 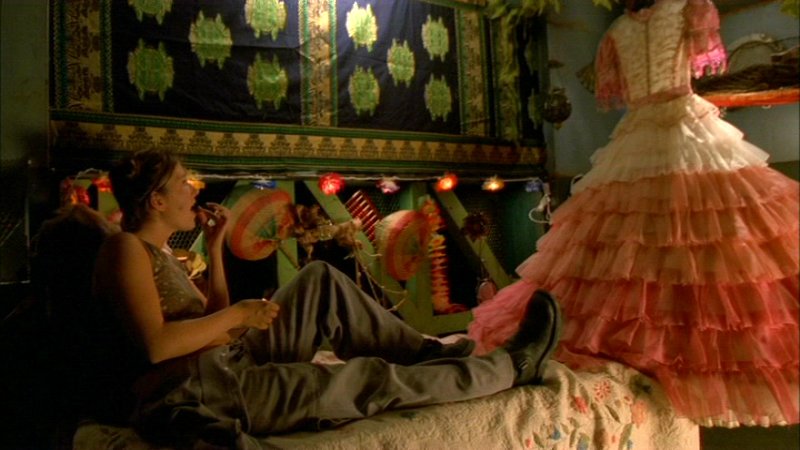 It lies between the Galley and engine room. There is stair access to the lower lounge. This expanded size of the ship allowed the class 4 to house more crew with a double room, two singles and a bunk room. The bunk room is big enough to accommodate a total of 7 crew. Not entirely comfortable but at least you have a place to sleep.

This room is largely unchanged given it uses the same engine as the class 3 and the class 4 engine room remains identical to the class 3. 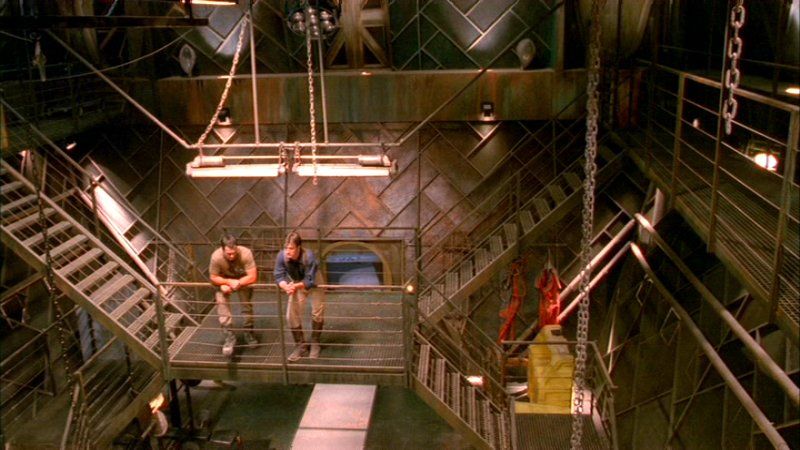 The cargo bay is expansive, significantly larger and able to hold two mules side by side and a bomb bay door. In addition, giving the significant height differences is the addition of a cargo loft complete with a cargo lift. The Cargo loft also gives way to access the pair of shuttle on the port and starboard sides of the ship. The Cargo Bay is highly modular able to fit a variety of needs. It also has stair access to the forward hallway and the Lower Lounge and Infirmary.

The roomiest and coziest part of the whole ship and where passengers spend most of their time. There are books, games, and various entertainment devices. This area is significantly expanded in the class 4 to accommodate the larget passenger capacity.
From here there is access to the Cargo Bay, Passenger Dorms, Infirmary, Galley, Aft Hallway, Showers and Bathroom. 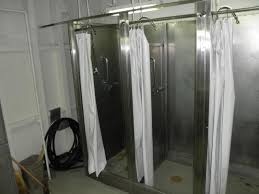 Much like a Chinese house the bathroom and showers are separate. The bathrooms are like little closets with mini sinks. The showers are communal and locker room style with bigger sinks, closets, and lockers for crew.

Often cited ‘the safest place on the ship’. The infirmary is roomy with an attached small office and access to two storage units. The infirmary stands in stark contrast to the rest of the ship boasting a great deal of shiny fancy bits of tech not seen outside of the core. To anyone not from the core, it’s the room full of blinking doodads, dials, and switched and cabinets neatly lined with medical stuff owning long barley pronounceable names. It all looks (and is) very expensive.

Far more expansive than the class 3, the class 4 boasts a capacity of 36 passengers. This entire area is completely modular and with some effort can be changed as needed. The passenger is capable of accommodate three types of room styles. A suite, a cabin and a capsule.

The suites have a small table and chairs as well as a small slightly cramped personal bathroom. They can either have a single bed or a double bed. 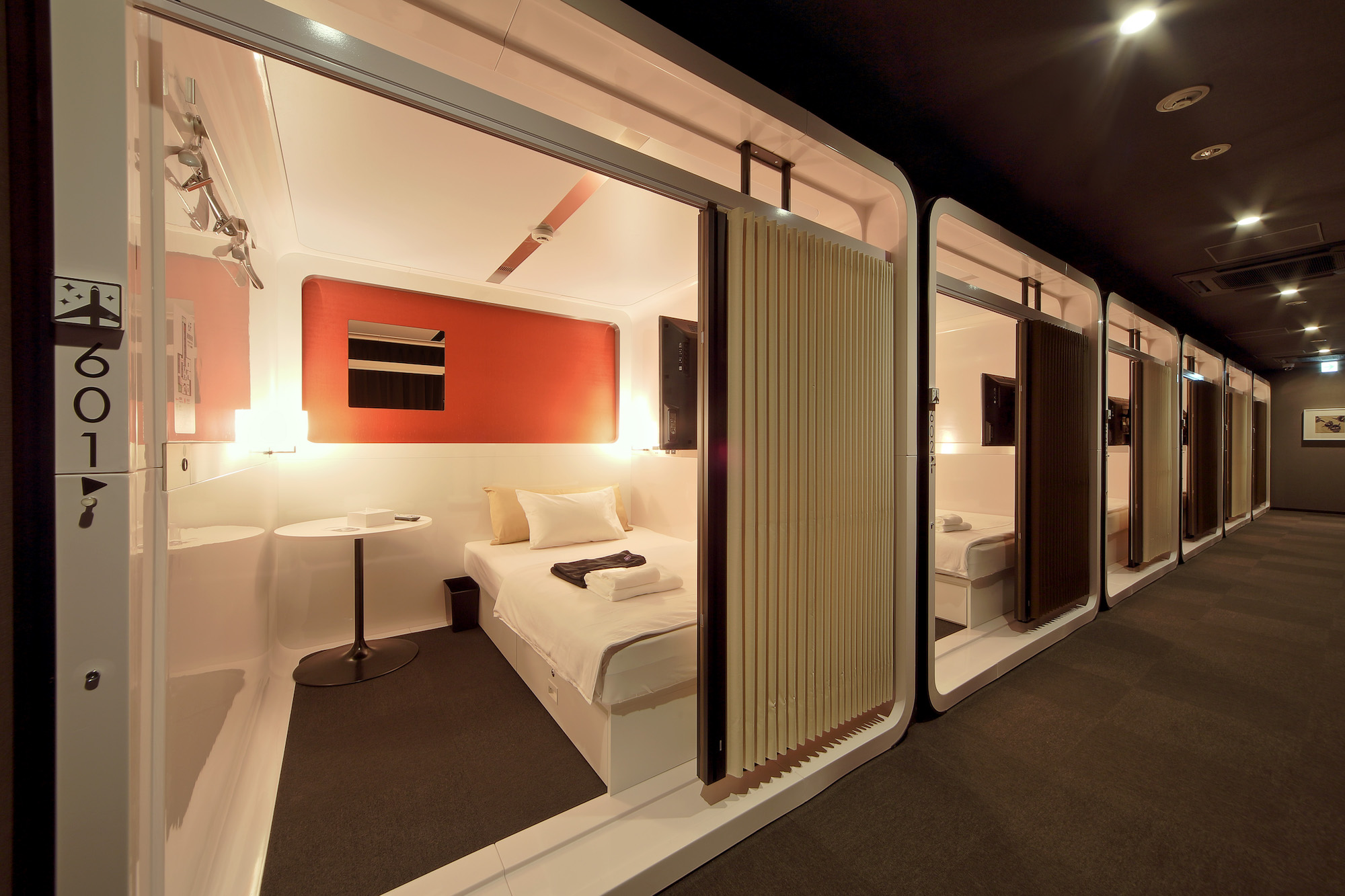 The regular cabin is what one would consider a single small room with a little space to stretch out. 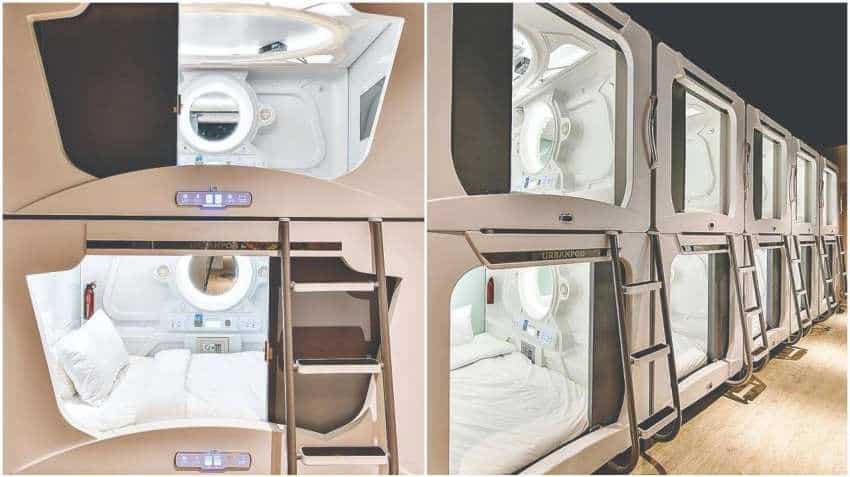 These are true capsule rooms with just a bed and bit of storage in a cubby.

At the end of the passenger dorms is a pair of spacious storage unites containing all the extra modular parts, the washer and dryer, and the cleaning equipment.

On the exterior, each engine of the firefly is fitted with navigation indicator lights (green on the starboard side, red on the port side.) That’s not on the quiz, but I put it on the tour. Flashy lights are one step away from shiny and we like shiny.

MAP OF THE LUNAR VEIL (Designed by Winters) 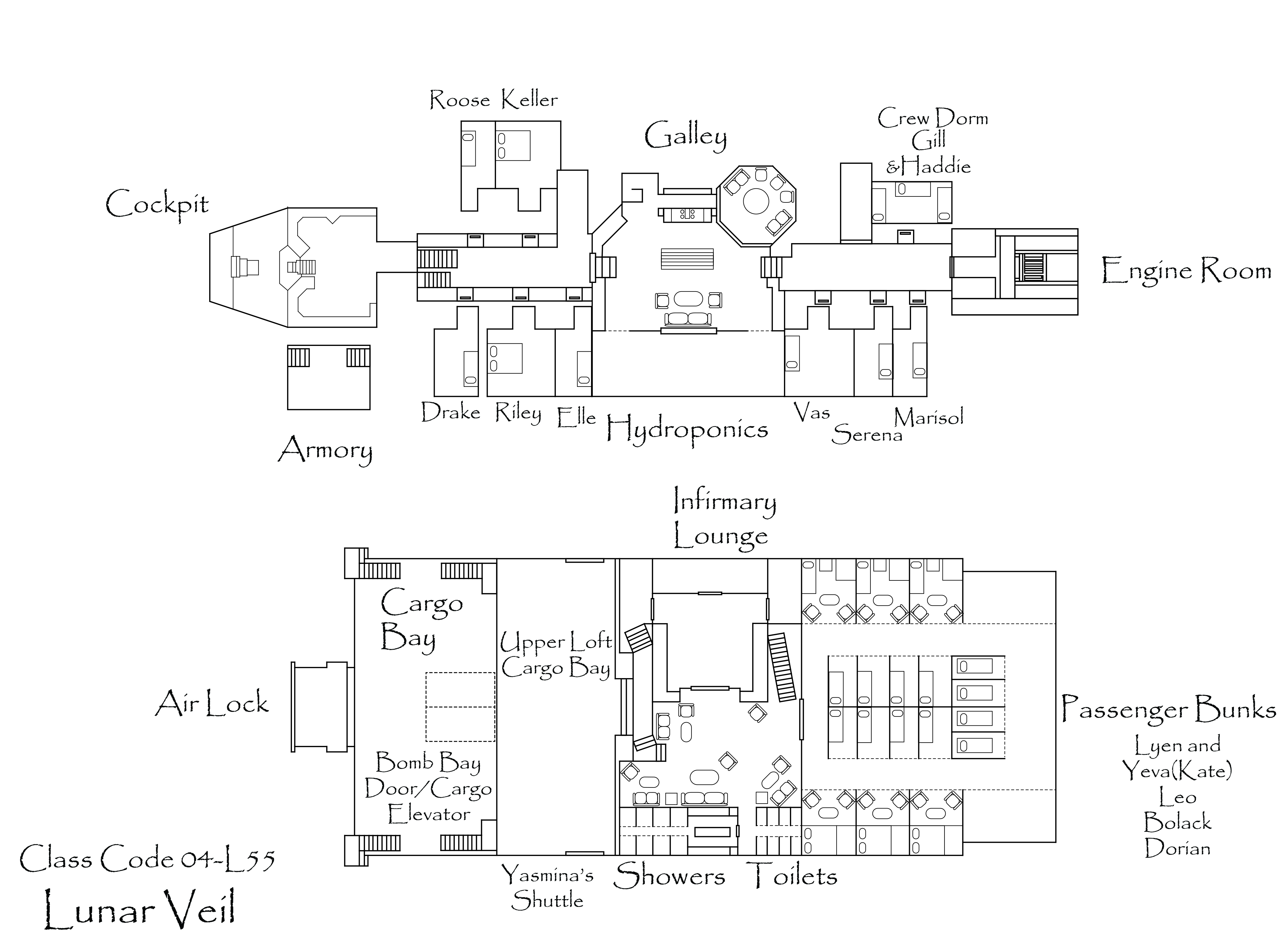