Oh Cousin, My Cousin (Dawn- Niko and Who Now?)

Twice Niko covered his face with the pillow to drown out whatever was going on in the hall. You would think in a place like the Sanctum with its moving rooms it wouldn’t sound like Bailey Bishop’s parade outside his bedroom door, but it was pretty futile at that point to hit snooze for a fourth time that morning. He did anyway, then in a blink, he was showered, dressed and well on his way to finding the kitchen for breakfast.

Bob Dylan Wong was waiting to catch Niko’s attention at the base of the stairs and called out to him. “Niko, Birdy needs a moment of your time. I don't like to criticize Theo or her eccentric ways; she is after all the chatelaine of this fine estate.” Birdy did indeed look uncomfortable discussing it at all. He and Niko rarely had the need to interact much and after last night’s curt conversation, Theo’s male handmaiden was less sure of himself. “But she has not been herself this morning. It's difficult to pinpoint; her matter-of-course whimsical attitude seems to have been...overruled. She did not want my assistance with anything this morning. And then there is the look she chose for herself. She's a vision, but with her strange behavior -- I thought it may just be an indication of the significance she places on today’s business, but in speaking with her, which she was not keen to do, she sounded ... off. Not herself. I just thought you’d like to know in case this sort of thing has happened before?” Birdy was trying to be delicate with the subject and had no wish to call Theo out, but he had genuinely noticed the difference this morning and for him at least, it was the first occurrence.

“No one likes when people refer to themselves in the third person, Bob.” Niko groused. Bob’s whole ‘obsession’ with Theo didn’t sit well in his stomach. After one quick meeting, he’d quit his job, moved in and changed his name? Niko wasn’t 100% convinced he wasn’t sent by the news station. Or maybe Theo's magic 'latched' him onto her. Or maybe both Bob and Theo had some sort of magical connection he couldn’t understand. As with anything he didn’t understand - He didn’t like it. “There’s nothing wrong with Theo.” He blew past Erik and the Ghost Spider Girl, near stealing a piece of toast but it was far too hot. Instead he grabbed a quick bowl of cereal from the kitchen and set off to find his cousin. “Don’t let there be anything wrong with Theo.” He whispered under his breath.

After the dick of a sanctum led him in circles, he finally found her room. He leaned against the door frame and tapped on the closed door with the back of the spoon before using it for his Lucky Charms. “All good?” He called. “I have cereal, you can have the marshmallows.”

Theo had in fact woken up early that morning in a temperament quite different from the one she’d taken with her into bed. Not at all unheard of, but with Theo those differing dispositions were a bit more pronounced. She skipped the Lucky Charms cereal this morning; skipped breakfast all together. She’d politely told Mr. Wong that she had no need of his services this morning and that she was not to be disturbed. In those words. She scoffed at the coordinated set of clothes set out for her by Birdy the night before and instead searched far in the back of her closet as if she knew exactly what she wanted. Niko disapproved, but she’d previously hauled up from the basement many of her mother’s things. Considering the union between Wanda and Stephen had been brief, it may have been unseemly for him to have in his possession so many of her things given the large representation of leather slink wear and accessories. But Theo saw it as something the Sanctum wanted her to have and found nothing wrong with it.

She’d dressed and spent the remainder of the morning going over the files Sam provided. And all the while her state of mind became one of serious focus as she reviewed those photos and read each of the details. Something in her head relaxed and the tension was picked up by something else. It was a subtle exchange, but she felt it.

“You are slower than usual, Miskja Brat!” He knocked on the door again. “And the marshmallows are getting soggy.”

Niko could hear the soft thump of footwear as his cousin crossed the room and the door opened. Theodosia looked like herself, but as he’d never seen her before. She was dressed fully in one of her mother’s old uniforms or costumes. It was an eye catching ensemble of red leather from toe to forehead. Her high leather boots fit over red leather pants and the upper piece of her ensemble was so long it swayed around her ankles like a long coat. She had on red leather opera gloves that blended with the sleeves and a slender cape suspended from her shoulders. The chest of the piece was snug enough to ‘hold her in place’ and accentuate her figure without revealing any skin. In fact the only skin visible was her collar line and the portion of her face not concealed by the “M" shaped headdress that held back her free flowing hair. 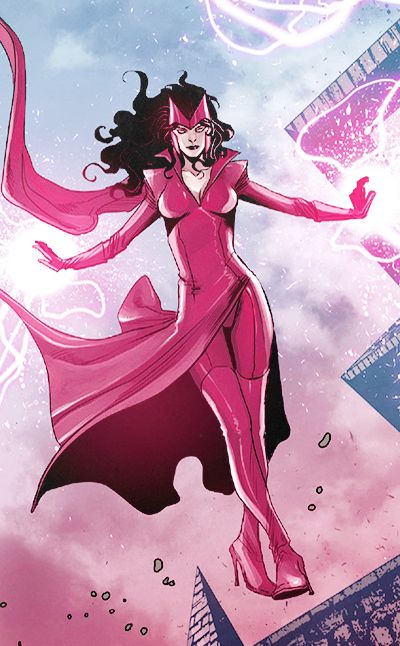 Theodosia stood there staring at Niko as he stared back. “Nikolai,” she cooed as she cupped his chin in her hand and turned it gently from side to side. “You’ve grown big and strong like your father. He would be proud.”

“I’m just as tall as I was yesterday, Miskja,” he replied, lowering his voice and taking hold of her wrist gently. “Why are you dressed like Aunt Wanda? Like your mother? We have to go upstate, remember, Theo?” Niko emphasized her name, and tried to keep the worry from creeping into his voice. It wasn’t the first time his cousin had spoken to him as if she was someone else, but never when she eerily looked like someone else. Game face, Niko. Game face. “Maybe this isn’t a good idea for today. I’ll tell everyone -- I’ll tell them something.”

“Don’t be silly, Nikolai.” She looked at the bowl of children’s cereal in his hands and shook her head with a knowing smile. “Somethings will never change. Others will merge and become something new. But this costume is only temporary so you’ll tolerate it. Come, you can introduce us to your team.” Theo pressed the files to Niko’s chest and stepped past him into the hall.

Niko dropped the cereal bowl in a nearby trash can, following his ‘cousin’ down the hall. “Ne sveda mi greatja” he muttered under his breath.

Theo called out to the house in a voice thick with Niko’s intermittent Sokovian accent.

Continue story
< Prev : Princes and Progeny (Dawn- T'Chantem and Sam) Next > : A Friend in Need is a Friend Indeed [Part I]