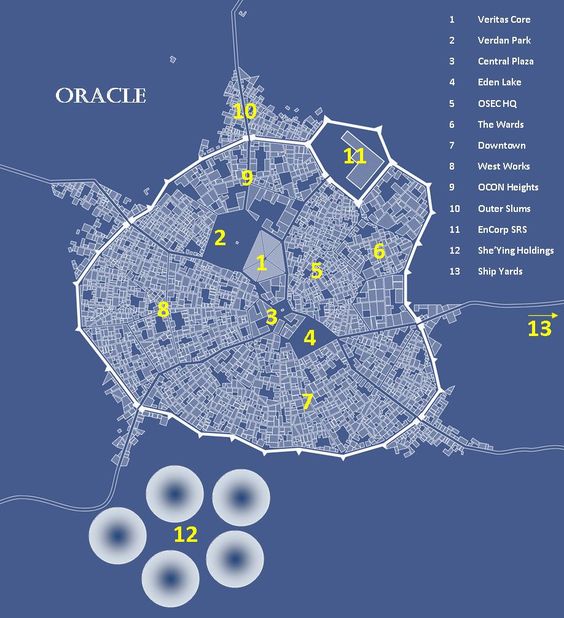 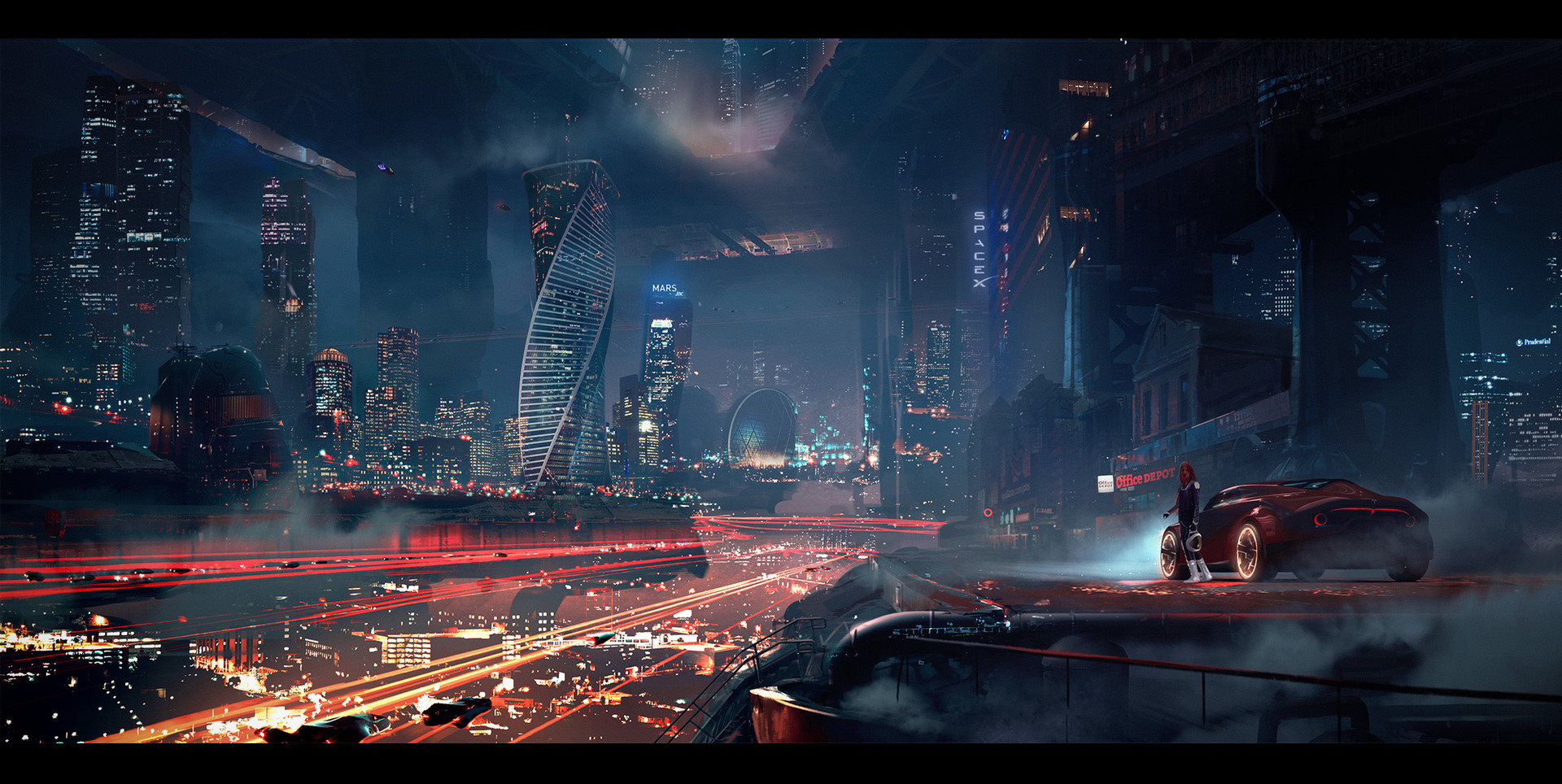 The City of Oracle is set on the partially terraformed surface of Mars. It is a low-grav environment with a thin atmosphere supplemented in the immediate vicinity of the city through an Ozone generation plant in the West Works that feeds breathable air throughout the city and processes carbon resources. On the outskirts and throughout Mars proper things are more precarious.

Oracle is owned and run by corporations, most notably the big five:

Titantech - Own the pathfinder outposts and terraforming technology rights on Mars. They also have a controlling interest in the Hyperion station and its fleet. Hyperion is a Titan class City ship of the same type of Oracle. The landing of Hyperion has never been attempted due to the Nemeria disaster. The Nemeria disintegrated on entry into the Mars atmosphere.

Sevo Group - Experts in Synthetic Evolution Sevo Group are a collection of closely aligned genetic and cybernetic research companies with a front end medical services and pharmaceutical business. At Sevo they define what it is to be human in the modern age.

Veritas - Are the AI experts of the modern world. They own the patents and rights for the Oracle core AI and manage the virtual space on Mars. They also own the mind bank, a transferred consciousness network. Of the big five Veritas is the most secretive and least trusted, an odd state of affairs for a company whos name derived from the Latin for truth.

She'Ying Holdings - Water, food, flora and fauna. That is the business if She'Ying. They compete fiercely with Sevo Group on pharmaceuticals bring natural product to market rather than the synthetic variants of Sevo. The jewel in their crown is the Biosphere network, a series of six large domed structures containing controlled climate and simulated earthen terrains. The Domes are a huge attraction for the Oracle population and will one day be the seeds for the reintroduction of wild species to the Marian world.

EnCorp SRS - Unique amongst the corporations EnCorp SRS has no employees or living board members. It is managed by a a private Mind Bank of board members and is run by a fully automated self replicating system. EnCorp provides energy to the City and beyond through Advanced Cold Fusion tech.

The corporations form a consortia known as OCON which together form common policy for the City. The OCON board meet through an Augmented Reality system provided by Veritas.

All public functions including security are contracted out to a management company called OSEC (Oracle Secure). OSEC Services include anything from maintenance, through to civil or even military service. Applicants are processed and allocated work appropriate to their ability.

The OSEC Academy is the police/military training school and is open only to the best and brightest amongst applicants. Working for any OSEC branch requires the signing of a waver to accept any and all genetic and cybernetic alterations and upgrades deemed necessary by the OSEC board.

Citizenship - Citizenship can either be bought from OSEC or earned through service to OSEC or one of the registered corporations. Without Citizenship you can not vote, you can not access medical care and you can not have representation in a court of law. You have no rights or recourse.

Currency - Credits are the common currency of Mars and they are managed through the OSEC Central Bank. There is no physical money, transactions are carried out through Sevo-Implants which upload to the Central Core through the grid. Without the implant you can not buys anything or legally own anything in Oracle.

Clicks are the underground currency of Oracle. They are used in the Hive and by the criminal underworld and lowlife of the City. Clicks are collected on hand held devices to help avoid detection on spot searches. Click for Credits agents operate out of the slums at various exchange rates allowing people to get by without having to resort to bartering. This activity is highly illegal.

The Grid - The AI network spanning the entire city of Oracle... more on that to come.

Continue story
Next > : Creating Your Character