Not So Tall Tales

Bolak poured another glass of blue Tranya and handed it to Chief Petty Officer Bethany Kennedy.

"Go on." he waved for her to continue while he sipped on his own glass. The young woman was fighting of the giggles as she tried to resume her story. She pointed at Bolak and fixed her gaze on his grinning childlike face,

"You, you have to promise not to tell anyone." she demanded with the closest she could manage to a serious stare.

"I swear it on my brothers life." Bolak assured her with his hands raised.

Placated she continued, "So there I was with an irate Admiral on the comm demanding to be put through to the Captain when Ensign McCree bursts in with a bare chest and a rose tucked between his teeth."

"Yes.. yes I swear I almost sank through the floor!" she laughed, "Ok ok what's yours, you have to tell me now."

Bolak sat back and pondered, "My most embarrassing moment since coming on board." he mused. "Ok I have it," he said at last, "But first, more Tranya."

Bolak set about pouring the next round for himself and the Chief as he started his tale.

"So it was my first night shift in Ten Forward and the lounge was quite busy. I had been getting strange looks all evening. The Linnik are not common in Federation space and seeing what looks like a child tending bar can be unsettling, especially for humans, you have such odd notions."

"You have a good evening." Bolak waved goodbye to another satisfied customer when the aft entrance opened to allow three members of the ships security team to enter. They scanned the room as a pair of Andorian cadets ran over to greet them. They had been glaring at Bolak for over an hour so he took some interest in what they might be saying to the red shirts. One of the Andorians pointed in Bolaks direction and the three men walked over.

"How can I help you gentlemen?" Bolak asked and they exchanged confused glances before the more senior of the group took charge and eyeballed the Linnik.

"Ok jokes over young man, where are your parents?"

"Where are my parents?" Bolak repeated the question with some indignation, "My father died eighty years ago and my mother is living out a quiet retirement in the Orion cluster."

"This bar is no place for a child," the officer spoke over him with a condescending smile, "Do you know where the barkeeper is young man?"

"I am the legal caretaker of this establishment." Bolak snapped.

One of the men was laughing while the other set about searching his data pad, "Says her the bar is entrusted to one Bolak a male Linnik."

"That's me!" Bolak confirmed but the man shook his head.

"No, no we have a picture here and it looks nothing like you."

Bolak groaned inwardly knowing what was coming, and sure enough the officer tilted the pad to reveal an image of a towering, pale skinned alien with wide cat like eyes and a bulging head. 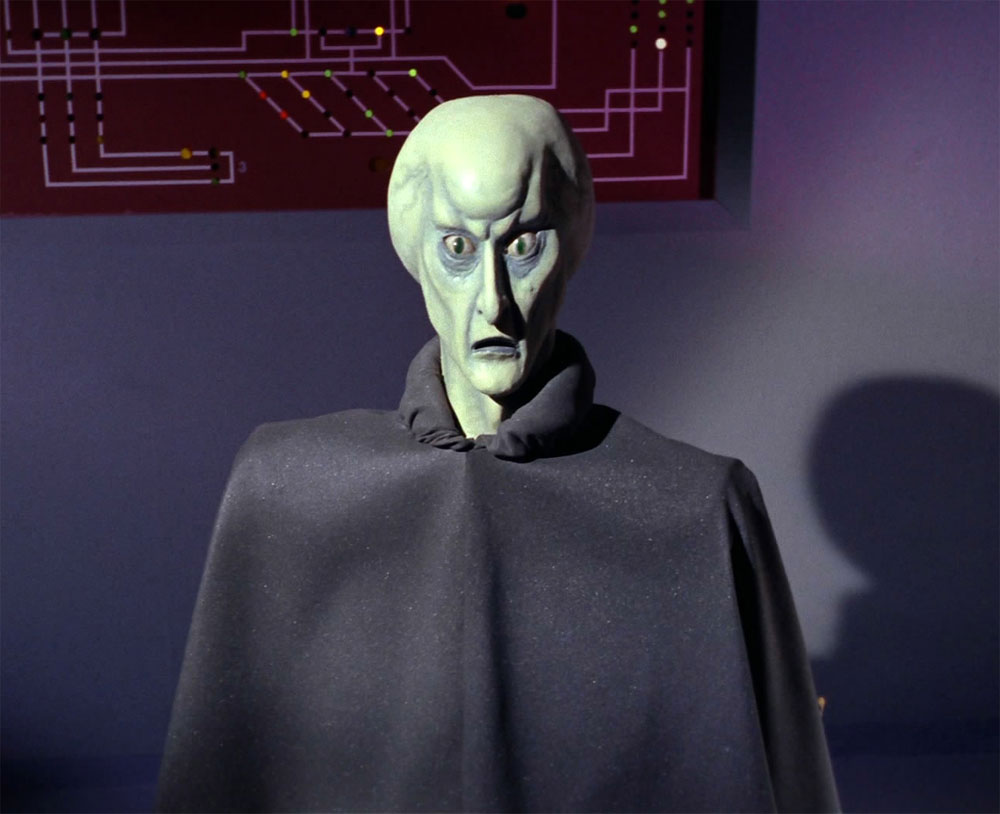 "That is not my picture, it is a mistake." Bolak tried to explain.

"Listen we do not have time for this I am going to have to ask you to come with us." the leader said in a firm fatherly tone that irritated Bolak to his core.

"It's not me, that is a picture of my brothers Dassik puppet." he cringed as the words left his mouth and two of the security guards were openly laughing now.

"That's it you are coming with me." growled the senior officer and with that he lifted Bolak over his shoulder and carried him kicking and screaming out of Ten Forward.

Chief Petty Officer Bethany Kennedy had tears rolling down her cheeks as she listened to his tale of woe.

"Why did you have a picture of your brothers puppet on your personal file?" she asked.

"It is a Linnik tradition," he groaned, "We use the image of the Dassik to represent ourselves to strangers, to impress and intimidate them."

"I am beginning to agree." Bolak replied.

"So what happened? How did you explain yourself?" she asked.

Bolak closed his eyes, "After three hours in the ships cresh, being fed milk and cookies by a pretty young ensign they came back to find me. A deeper study of my file revealed the truth and they were mightily embarrassed about their mistake let me tell you... though admittedly not as embarrassed as I was."

"Priceless." laughed the chief, "You win hands down. Now how about another round?"

Continue story
< Prev : But first... The Tranya! Next > : An OPertune Moment