Among Us - a play-by-post rpg

He looked back at his reflection in the mirror and smiled. The suit was of excellent quality. The tailor adjusted his lapel one last time and stepped back judging his handiwork.
"It suits you like a glove, sir." the older man said. "The finest quality you will find in the city."
He nodded. He had to admit it was a good suit. He ran his hand through the arms of the grey jacket, feeling its crisp wool.

Appearances were everything. Every situation required a specific attire. Especially in this land. The land of money and Capitalism.
Where the wealthiest people in the world looked down on some of the poorest from separated only by sheets of glass and metal, as if they lived in total different worlds.
The dream they sold you was old but repackaged. That anyone could make it here. The land of opportunities, of justice, the land of the free.

And they had come in droves here for the last century or so, from all corners of the world. Hungry for the dream. Desperate for success. For fame and glory.
And the few that had made it had left behind a trail of shattered hopes in their wake. Of empty lives and promises, feeding a gluttonous society that chew and spat people with a voracious appetite. All were welcome one way or another. The beast needed constant feeding. It demanded sacrifice.
The road to hell was paved with good intentions the old saying went. But here it was paved with the husks of those who had failed and in the end became simply another clog in the machine.

"I will take it." He said with an easy smile and in a strange accent. The old man smiled backed. "In fact I will take 2 more. One black and a blue." The tailor's eyes widen. He could not believe his luck. Each suit was $5000.
He moved to his bag and pulled a piece of paper out.
"My assistant will come and collect the rest late tomorrow." he handed him a list of other items he wanted. Shirts, socks, shoes, ties and belts. A complete wardrobe that he would require to better blend in certain circles.
"He will show you a card like this one." he held a simple black card to the man.

The man was trying to keep his face calm. This was going to turn out to be a very lucrative day.
He grinned again. And place a hand over the man shoulder pulling at him so that they both faced the mirror.
"These suits will be your last creations. A loving gift to a stranger." he said whispering in the man's ear. "I will think of your skill when I wear them."
The older man's eyes glazed slightly.

"After my assistant comes to collect the other items, that are paid for already I may add, you will go about your normal business. Once you close to the public, you will come here, stand in front of this mirror, slice your veins deeply with your scissors." he continued with a wicked grin.

"You will not hesitate nor waver. You will not be distracted or scared and you will ensure you are alone. You will simply know that your life is at an end as you cannot surpass the masterpiece of the suits you created for me."
The old man nodded slowly.
"Before you sit and bleed out in front of the mirror, you will write the following message in blood on it." he whispered the words to the man and kissed his cheek.
"Know that he will welcome your soul. Rejoice." he laughed and turned to leave.
"And of course tell no one of our conversation."

He walked into the streets wearing his new suit with a smile on his face. Yes he was going to enjoy his time in the New World. Here the veil of reality between dimensions felt thinner. These would be good hunting grounds. A new world full of pain, disappointment, greed and suffering. It was almost like he could see the Infernal Plane already.
He was hungry. He needed to find a place to stay. He had a very important auction to attend in the next few days. He could not believe that he had finally traced it down.
The first item needed. The first step to unlock the final secret. 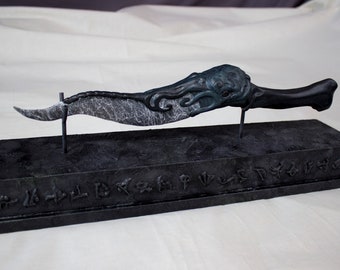 Two days later the body of the old tailor was found in his shop, his head leaning against the mirror.
Kneeling in a pool of congealed blood as if he was praying at the blood scribbled words above his head.
/No wealth, no ruin, no silver, no gold, nothing satisfies Me but your Soul/

Continue story
< Prev : The Queen of Bones Next > : Investigation