“ No, I am making a party to figure some stuff out. I see your name is in gold you work for the company too. ”

Well yeah, I guess I do, " I thought to myself. In all of the confusion, I had forgotten about the outside beyond my struggle of trying to get back to it. That was one hell of a thing to think about though, the fact that the company I worked for had effectively trapped me in this game. I couldn't ponder this for long, though, the Inquisitor's voice completely shook me from my thoughts.

“ He is with me! " The Inquisitor exclaimed with a look of concentration and the slightest hint of worry on his face, causing two town guards which had walked up for some reason to back away.

What? Seeing as how the man had been engaged in conversation with me mere moments ago, the outburst seemed horribly out of context, however, in the next passing seconds, I had come to realize there was something very wrong about the situation I was currently in. All around me were the town guards I had seen earlier, only now they seemed to be in a sort of pulsating crowd and I was smack dab in the middle. Those sneers and growls seemed almost to be aimed in my direction. Weird though, I was a law-abiding citizen for all they cared, right? I had just entered the town for christ's sake. In spite of that, I could see guards visibly growing more and more irate seemingly at my mere presence, blades raising, teeth-gritting, digital blood boiling. I knew an aggro'd NPC when I saw one.

“Invicta, you can join us I need all the help I can get. But we need to move now! ”

He knows my name? I thought as he practically began to drag me through the crowd, too disoriented from everything that had happened to make heads or tails of about anything. The space around me turned into darkness, and by the sounds of blades cutting flesh and bloody screams, everything began to get sad fast. I had gotten the general notion to summon my mount, having to reach out for it due to the poor color choice, and the Inquisitor and I rode out of the darkness and through the gates. What galloped out of the smog behind the armored brown beast that the Inquisitor rode was a dark steed with flowing black hair and glowing red necrotic eyes of unholiness. 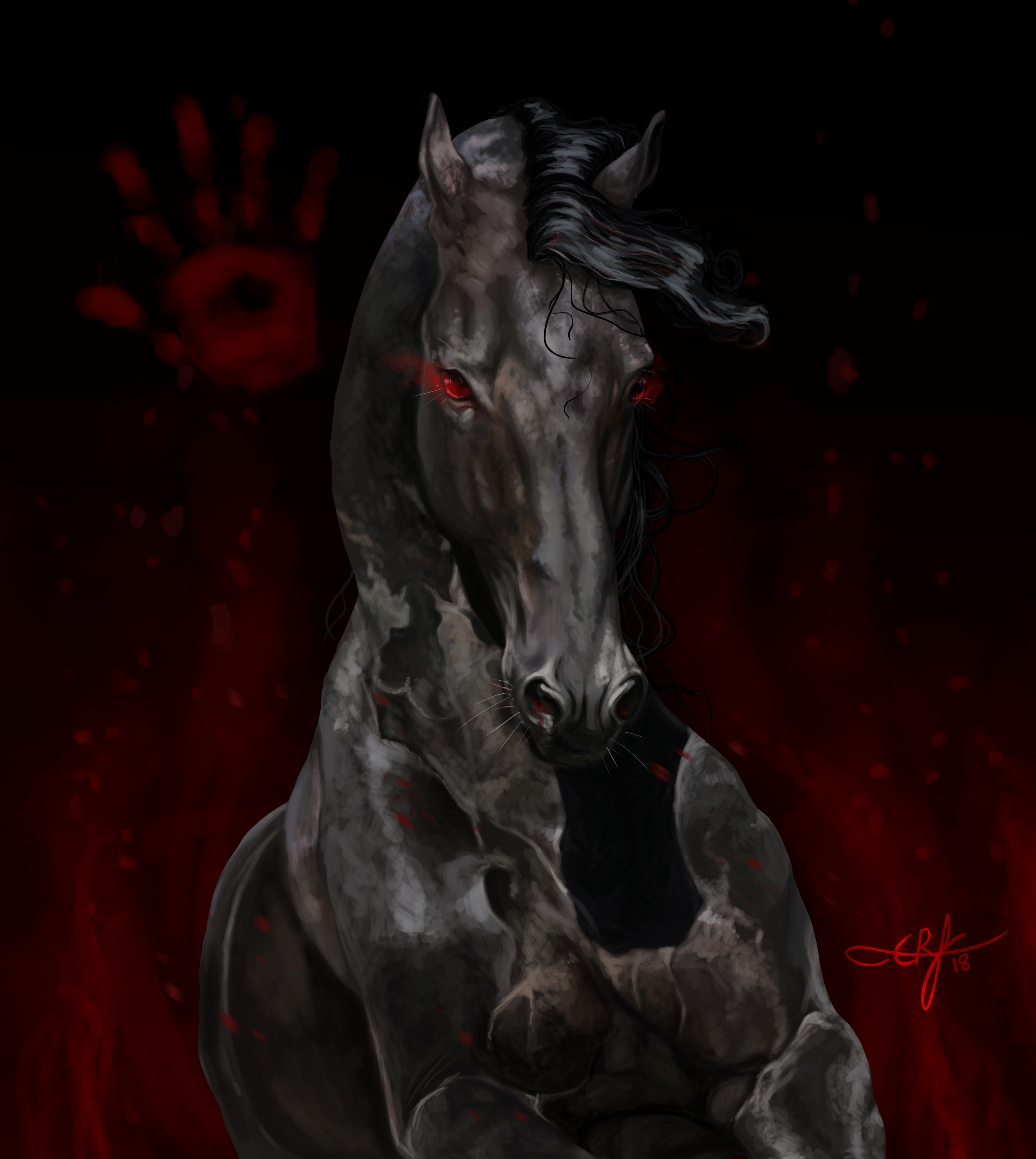 For someone like me, the horse may have seemed a bit of an uncharacteristic choice, probably a better fit for some sort of assassin or other murderer, but this particular horse happened to be modeled after another horse from an old RPG that held a special place in my heart. The sudden realism of the game likely made her hard to control, but I wouldn't know as Mere flawlessly sifted through the crowd behind The Inquisitor, seemingly having a better grasp on the current situation than even I did. Finally, we rode to a clearing where some other players had arrived. Looking at the crowd, I recognized few faces from earlier, even that one rogue from before was here. And yes, I noticed the Dread Knight sitting on his horse like a normal fucking person but he wasn't swinging at me so I had no reason to complain.

“I see everyone made it here alive,” The Inquisitor said, smiling, before looking to the Dread Knight. “Well almost everyone,”

“Everyone ready, O I pick up another player, Invicta! Introduce yourself!”

There was a moment of awkward silence as I realized I had no efficient way of fulfilling that request. My character was mute. I had come to terms with this fact the soonest of almost any other, though it was a bit of an issue, and I felt like total dumbass due to not being able to speak. Even so, I had to get it out of the way. I pulled my menu up and tapped vigorously to get my words out as fast as possible, like a player with useful info to relay to my party whilst in the middle of a boss rush, but the analog stick based chat function was the only way I could hope to communicate. At least this was touchscreen.

Just as before, I pressed Speak and the same male Siri sounding-ass automated voice spoke my words.


"hi there i am invicta"

There was yet another space of silence, however before anyone could ask my index fingers sprung into action once more.

"i think because no mic"


With each of guy-Siri's words, I wanted even more intently to hide under a rock and die. Lord, this is stupid...