Called to the Shadow

Zithill observed the angry exchange between the lizard creature and his Twi'lek companion. Despite the angry threats of the Barabel a violent outcome seem unlikely. He also noted that the Barabels hulking companion had remained silent throughout the whole affair, seemingly unmoved by the argument either way. Another good sign.

The three humans he kept a wary eye on. Humans were not to be trusted. They had a tendency to consider the entire universe their private playground and all alien life forms little more than a fascinating menagerie to use and abuse as their whim dictates. He had little love for humans, and the twins were unnerving.

They were close to the opening and the figure now. The force humming in the air, almost tangible. He had to resist the urge to reach out and grasp at it. He could see the shadowed vapours of his trail snaking around the cloaked figure ahead of them.

“I’m Lyra, do any of you know what is going on?" The voice came from the rear of the hall. Another human and... something else. More followers of the K'hell. So be it.

"We follow the path..." Zithill started but the ethereal voice sounded once more to cut him off.

The cloaked figure ahead turned and stepping into the darkened hallway it vanished. Zithill was the first to follow. Not looking back to see if any remained behind... All light fled as they walked onward into the heart of the structure. The ground began to slope away from them into the rock and the air began to cool. From either side of the long corridor fetid vapours seeped in like the breath of death itself and the stone beneath their feet grew slick and treacherous. 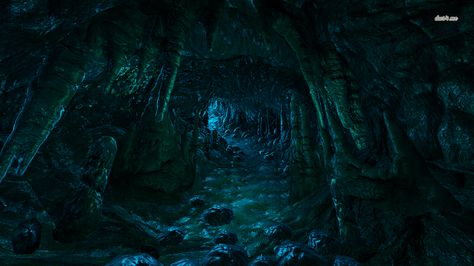 Continue story
< Prev : Nyavi explains her point of view Next > : The Gand