The Hard Rock Kandy tried to run Bazooka Gum Joe into the railings. Her Rock Candy Kart chipped away at the armor on Bazooka Gum Joe's Kart as pieces began to fly off. This made Kandy over confident as she applied to much power in her sideswipe and her candy diamond like tires were soon hot and getting coated in gum. This became a big unavoidable problem as the two Karts merged into a big glob of sticky pink gum which hardened as it cooled down. Kandy and Joe quickly began arguing soon after. Gummy Jaxx smirked as he drove quickly up to them before submerging underground before they noticed. After a while Gummy Jaxx popped out from the ground and headed down the track with breakneck speeds.

Soon he crossed the finish line alone as the other racers were stuck behind the gummy glob made by Kandy and Joe who were still bickering like spoiled angry kids. Jaxx did his usual victory turn holding his trophy and spun out for the fans who were made of sweets. Then he parked his Kart and left the game to meet up with his friends at Gordon's place. 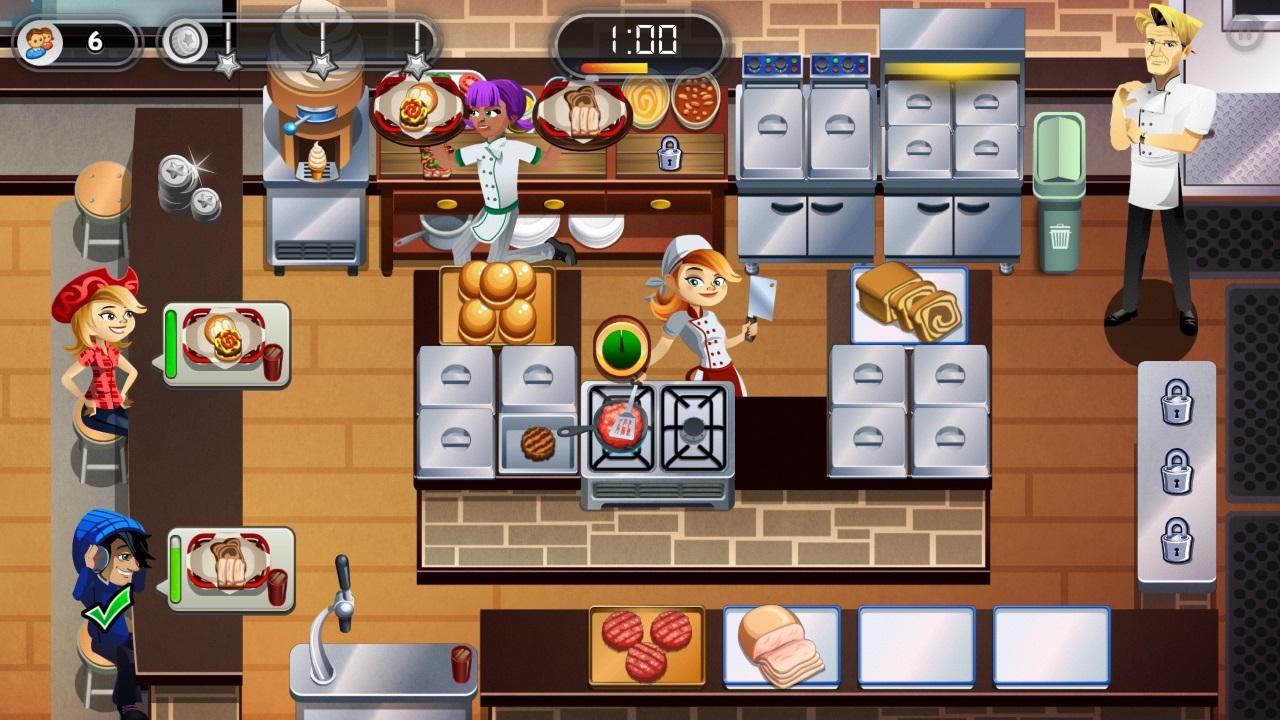 There he met his friends from other games including Lily, Mega Knight & Sa-Tien. After a long day Gordon quickly took their order and served them a great meal.

Eve: So did you win again Jaxx?

Eve: Meh. I won and lost a lot as usual. Sometimes I wonder if they are taking the game seriously. Hmmmph.

Jaxx: Chill Evebabe. No need to harsh your mellow over some unrighteous dudes who don't appreciate ya.

Eve turned a bit red as she became shy next to Jaxx.

Mega Knight was feeling nervous as he was sipping his drink through a straw through the small slit in his helmet. After clearing his throat and a few nervous breaths he spoke up softly.

Sa-Tien was reading the news paper he got from the Paperboy Game with his glasses on. He looked more nerdy than evil a this moment.

Sa-Tien: Looks like Gaming stocks have gone up again.

Jaxx: Well maybe that means we get to keep our job a bit longer.

Eve was fighting the urge to hug Jaxx once again. his cuteness was breaking down her mature defenses. Mega Knight was nodding so he could afford talking as he sipped his drink. Then since it slowed down a bit Gordon came by.

Gordon: Is everything okay guys?

Jaxx: Most righteous as usual bro. Your a legend among legends.

Gordon: Glad you're a fan Jaxx.

Eve: I do enjoy our time here together.

Mega Knight: Me too.

Gordon: Glad to hear about it. Apparently my game is going international soon.

Gordon: So uh Jaxx you do know we a section in the back for romantic couples.

Gordon: A little bird told me you happen to be popular among some of the ladies. So if you find yourself in that situation just keep it in mind.

Jaxx: Ummm bro I like got no interest in those backstabbing racers or candy fans in my game and I like don't recall any fans outside my game so who are ya like talking about?

Sa-Tien, Mega Knight and Gordon looked at Jaxx who was clueless and the beet red Eve next to him. They were shocked at how obvious the answer was and how sadly Jaxx missed it. Gordon looked at the others and nodded like he had a plan.

Gordon: I see so your still a bachelor then.

Gordon: Well then how about a practice date to get some experience.

Jaxx: Sorry bro but you're not my type.

Gordon almost lost his temper till he began his controlled breathing. It took patience to get Jaxx to use his brain outside the norm.

Gordon: Well the truth is I need to get my staff to get some experience serving couples in the back in a romantic setting and I thought since you all are regulars here, I could get you all to test it out.

Jaxx: Oh...okay bro sounds cool. Are you guys in?

Sa-Tien: Oh I'd love to but MK and I have plans already with out book club.

Gordon: Well then how about you and Eve here try it out. Would you like that Eve?

Eve was trying to contain her excitement as she nodded to keep from saying something foolish.

Gordon: Well then how about same time tomorrow you both meet in the back room and I'll put a reservation for you two.

Jaxx: Cool bro. Well Evebabe I hope we have an awesome time then.

Gordon winked at Eve and nodded at the others as they nodded back. "Operation get Jaxx and Eve to finally date" was a success at last after many, many, failures. Eve was nervously happy and looked like she had to go to the bathroom. In order to regain her composure he excused herself to the bathroom and once safely inside the let out her excitement like a teen going to prom. She danced, laughed, cackled and screamed as she was on cloud nine. Once she calmed herself down she washed up and fixed her hair before she made her way back to the guys who were pretending they didn't hear her in the bathroom. Even Jaxx was not sure what to say.