The front door opens with ease. Stepping into the lobby the first thing they notice is the overpowering, coppery odor of fresh blood. Mike turns to Jacob.

Jacob answers his friend’s wisdom by releasing some kind of wave of energy from the Staff of Olegnos.

They proceed into the hallway and come across a room of glass windows labeled Security. As they turn to the open door, they are immediately faced with a scene more horrible than they could have possibly imagined. Against the interior wall, they see the broken and mangled body of their friend Steven. His limbs are bent and twisted as if they were made of pipe cleaners. Large tracks of tissue are splayed open where ropes of artery, muscle and sinew were pulled out and shredded. Stringy remnants hang off like the fibrous pulp of a freshly carved pumpkin. The carpet appears soaked through by a massive quantity of Steve’s blood in near dark pools. Sitting on the stool next to Steve’s corpse is the crude desecration of their old friend Mikey, now calling himself Malphas. His face and fanged grin is still dripping with Steve’ blood. 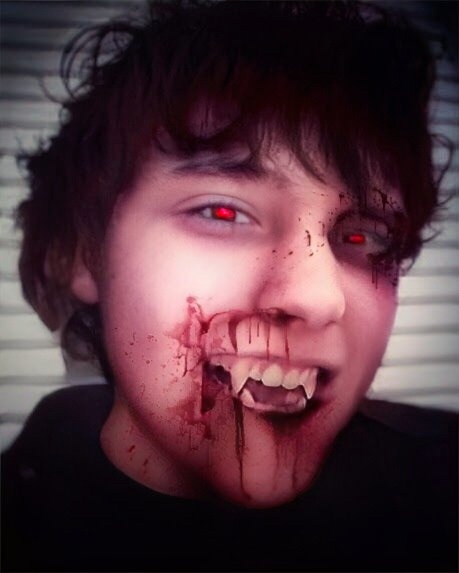 Without hesitation, Jacob thrusts the Staff toward the enemy. A thick torrent of black and brown debris flies with a clap in a focused column directly at Malphas. He moves in a blur to the left, stopping with his arms folded, leaning against the window. The stool he was sitting on and the melamine panels behind him are now destroyed - shredded by thousands of large thorns and barbs deeply imbedded in the wall.

“Oh, Jacob. That was uncalled for.”

Mike strikes with his mace, with Malphas effortlessly dodging to the right. The steel head destroys the laminate surface of the conference table he was leaning on. As Mike recovers from the over extended strike, Malphas backhands him in the jaw. A crackling snap is released by the protective energy of the Staff of Olegnos. Malphas grins.

“Oh, you boys have acquired a few neat little toys since we parted ways. Nice. You’re lucky, Paterson. That woulda hurt.(beat) You know what you need to learn, Jacob? Subterfuge. (beat) You have to play a little dirty every now and again.”

Malphas moves in a flash to the other side of the room behind the guys.

“They captured me and chained me to a wooden post where a dan’jaraas drained every ounce of my blood. They left me there for three days, where they nursed me into the darkness. You know, I couldn’t understand why you didn't figure out where I was. Why you didn’t rescue me. I was chained to that fucking pole in the basement of that funeral home for three agonizing days. And you had not a single clue! (beat) Subterfuge. They kept you kids busy with scary distractions while I grew into this.”

He strikes a dramatic pose, as Jacob unleashes another blast of thorns from the Staff. This time Malphas doesn’t move in time and a few hundred thorns strike and pulp his left shoulder. He turns and hisses at Jacob in a truly horrific rictus.

“Ha ha ha ha...good shot, Jew boy! But for that, your friends must pay. I mean, come on. Do you really think the Myriad would stockpile all of their power cubes in a tractor trailer, just waiting to be shut down by a couple of dago kids?! (beat) Subterfuge.”

Suddenly a flash erupts from the midway, followed by the tremendous roar of an explosion and a shock wave that takes out all the windows on that side of the Center.

Mike rushes to the blown out windows and looks toward the flames. Screams and running figures dominate the senses.

“Mikey! Why, man? What the hell did they promise you? What did they do to you? You betrayed us all!”

The dan’jaraas tilts his head slightly.

“Uh, I’m sorry Mikey is gone and will not be coming back. I...am Malphas. All that’s left of Mikey is just a nagging, skewed television image of a broken past and a damaged, pathetic, mick sissy boy. Move on, Mike.”

His movement again is lightning fast as he moves directly toward Mike’s chest with his clawed hand pointed in a dagger thrust. But, instinct gives Mike a flash of a warning, allowing him to just barely step out of the way of the attack. Malphas’ claws pierce the drywall about eight inches deep. He pulls his hand out and shakes the dust off in a single snap.

Mike swings once again with his mace, missing his mark as Malphas turns away.

“Jacob. That snot-nosed, junior chemistry set Kenley Taggart was always so quick to rub his intellect in all our faces. But did he once think that those cubes might be part of a larger plan all along? That the formula contained in each of those many vessels might just be important?! The idiot! Subterfuge!”

Malphas leaps on top of an office desk, kicking the flower vase on top across the room. The glass explodes causing Jacob and Mike to shield their eyes. Jacob turns around, holding the symbol of Surin before him.

“Fall before the power of Surin!”

A wave of pure, holy light beams forward, striking Malphas full on, and driving him violently against the wall. The dan’jaraas screams in unfathomable agony.

Malphas crumbles in a heap on the floor. After a second or two, he stands, staggering with most of the flesh on his face and arms blackened and festering. He breaths through ragged gaps in his cheeks. One eye is burned from its socket.

With a powerful thunder clap, an otherworldly screech splits the skies, turning into a roar felt from deep within the ground beneath their feet.

“Jacob Laberman. Let me introduce you to the Scourge of the Visible Wyrld - Arwic, Lord of Despair and a Father of Pain! Now is the time of the Devastation. Now arrives his court in this his new kingdom! Prepare yourselves for the darkness and the Myriad of Shadows!”

Malphas turns and leaps through one of the broken windows, disappearing into the chaos.

Lightning overcomes the skies. Tempestuous winds sweep the dead and broken away with the destroyed buildings and debris. Survivors run for safety as inhuman beings step out of the deep darkness and stalk their prey. And high in the sky, towering over the Ferris wheel, is the ghostly white form of a gargantuan entity unlike anything ever imagined beyond the mythic tales
of Ragnorak.

Jacob and Mike run out of the building, keeping an eye out for their friends. They forego their bikes and opt to run instead directly to HQ. The radio shrieks with Kenley’s voice.

“OH MY GOD, ITS COMING!! RUN! CREATURES ARE KILLING PEOPLE! EVERYBODY’S DYING, JUST GET OUT OF HERE!! RUN!! RUN!!“ 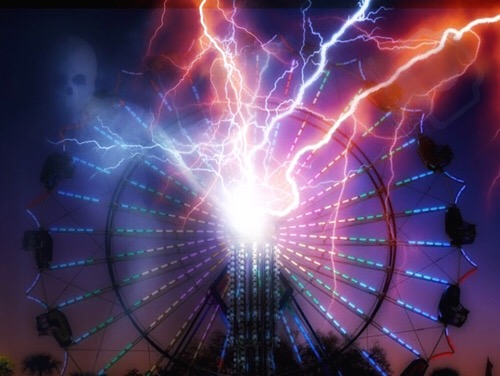