The sound of gun fire has died down. Ozone floats above the floor like swamp gas on a hot, summer night in the bayou. Shell casings litter the floor, along with various mismatched body parts of various unrecognizable guards. Mostly off-duty cops. Marilyn Purcell is still drawing breath. Her left arm was one of the first parts of the mayor’s townhouse to be destroyed. Torn to shreds with barely an effort. Her right arm has been nailed to the ornate mahogany newel post of the stair banister with forks from her brand new Tiffany silverware service. She ain’t going anywhere. The mayor’s assistant, midway through shaking up a batch of martinis, was eviscerated in an instant by something not quite sharp enough for surgery. Butter spreader, maybe? No matter. A dan’jaraas has plenty of power to cut open what needs to be cut. The young man’s entrails made quite a cinematic statement when used to bind His Honor to his favorite rich people chair. The steam is quite visible, belching out from the still contracting gut of the underpaid civil servant. Other than the horror on display, and the dismissed help, Mayor Purcell is in healthy, near mint condition.

Malphas has already consumed half of the blood volume of the Mayor’s son David, now collapsed but conscious in a provincial salon chair. Too bad Dave leaked so much out of his asshole. Jeesh...that’s gonna stain.

“Look, babe. Mommy looks so regal on the stairs like that. A regular Princess Diana, don’t ya think? And your Daddy? Sitting in his throne. So, so powerful! So important. So...fucking helpless.”

In a blink of an eye, Malphas is standing in front of the Mayor.

“Now. You got your son back. So, you’re gonna give the Laberman boy and his friends everything you promised. The school, the playground...shit, give them whatever you can think of until you can’t think of anything else to give. There’s one thing I hhhhhhate, it’s a man that goes back on his word.”

Malphas unzips his pants, pulls out his penis and proceeds to piss a luke warm torrent of Dave Purcell’s blood all over his father. The stench is indescribable. Coppery, rancid runoff from the drainage pipe at a slaughterhouse?

“Ahhhh... That’s so you’ll never forget your baby boy. You and the Missus will never see this beautiful creature again. He...is...mine.”

“I leave you and Lefty alive to remind one another that if you ever try to contact your former son again, he will slowly consume you both and force you to share in the feast. (beat) Hmm...funny. After savoring half your son’s blood, I keep making bad food references. I guess I’m still pretty hungry.”

He takes the Mayor’s bound left hand and simply pulls off his thumb in one tug. Smiling, he pops the digit in his mouth and chews it like a raw mini carrot.

He takes David in his arm and throws him over his shoulder with barely any effort. He kisses Dave on the cold cheek as the boy manages a plaintive moan.

“I know, I know my love. Leaving the nest is difficult, but it’s an important rite of passage for any young man.”

Malphas waves David’s limp hand toward his parents. He makes a mocking attempt at the voice of an amateur puppet in a traveling fair.

He takes two steps and throws David’s body through their third story window.

He leaps through the gaping hole in the glass and disappears into the fading light. 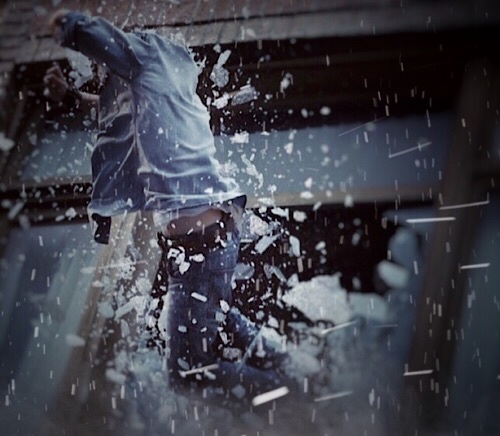