Christie Blender is gowned and masked with two layers of latex gloves. She has two young assistants and a guard stationed in the infirmary. Strapped to a table at a 45 degree angle is the Watchman attacked by the first victim of this afternoon’s pulse strike. Joe Booth.

Okay, gentlemen. Here’s what I know. Anybody that might come close to being called an expert is either up to their ears in victims of various fun and exciting Shadow-related attacks or performing essential surgeries with turn-of-the-century medical technology.

Okay. Joseph Booth. Time of death? 2:28 pm. Reanimation? 3:12 pm. After witnessing and observing Joe’s decline, the first thing I noticed is what I’d call a shuffling gate. He doesn’t move like a normal, functioning human. He seems to have difficulty walking, off-balanced and poor to non-existent spatial awareness. My guess is that there is some kind of rapid, necrotic decay in the cerebellum, found at the bottom of the brain and generally understood to control motor skills and coordination. He seems to exhibit zero to no cognitive understanding of measurable worth. I’m guessing that this disease causes some kind of rapid and severe damage to the frontal lobe affecting impulsivity and what we may consider instinctual response. (beat) Joe knows what he wants. Human flesh, blood and organs.”

“I get the need to feed. But why are they so aggressive?”

“If this disease was manufactured by the Shadow Kin, I’m going to assume that they’re going for maximum trauma to bring about maximum pain to the victim. It might be that the aggressive nature is to trigger a fast turnaround, assuring propagation of the disease. Each victim becomes a vector. The anger may somehow kick the amygdalae into overdrive.”

“Well, imagine a pair of almond-shaped regions in the grey matter of the brain. (beat) You know, maybe they’ve somehow been given a tweaked desire to eat. Maybe they’ve been hard-wired to feel hungry at all times. Imagine the madness of constant starvation.”

“This is some sick shit.”

“Yep. Sick. And I have no idea of how to stop them. In the meantime, our living have to stay very far away from Joe here and anyone else who might have come in contact with these things. We have to assume that they’ve delivered similar gift baskets to other locations throughout the territory. To be on the safe side...sterilize any weapons that may have come in contact with their blood or body fluids. We have no idea what we’re dealing with.”

“And spread the word people. These ain’t Dawn of the Dead zombies. Head shots will not take them down. Get aggressive.” 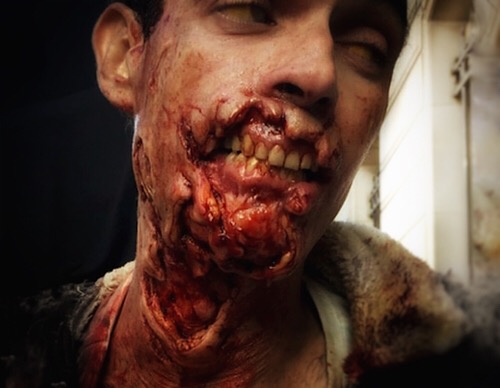