Lost Mine of Phandelver - a play-by-post rpg

Just like a fantasy novel or movie, an adventure is set in a larger world. In fact, the world can be anything that the DM and players can imagine. It could be a swords-and-sorcery setting at the dawn of civilization, where barbarians battle evil sorcerers, or a post-apocalyptic fantasy where elves and dwarves wield magic amid the wreckage of a technological civilization. Most D&D settings are somewhere between those two extremes: worlds of medieval high fantasy with knights and castles, as well as elven cities, dwarven mines, and fearsome monsters.

The world of the Forgotten Realms is one such setting, and that’s where the story in this adventure takes place. In the Realms, knights dare the crypts of the fallen dwarf kings of Delzoun, seeking glory and treasure. Rogues prowl the dark alleyways of teeming cities such as Neverwinter and Baldur’s Gate. Clerics in the service of gods wield mace and spell, questing against the terrifying powers that threaten the land. Wizards plunder the ruins of the fallen Netherese empire, delving into secrets too dark for the light of day. Dragons, giants, demons, and unimaginable abominations lurk in dungeons, caverns, ruined cities, and the vast wild places of the world.

On the roads and rivers of the Realms travel minstrels and peddlers, merchants and guards, soldiers, sailors, and steel-hearted adventurers carrying tales of strange, glorious, faraway places. Good maps and clear trails can take even an inexperienced youth with dreams of glory far across the world. Thousands of restless would-be heroes from backcountry farmsteads and sleepy villages arrive in Neverwinter and the other great cities every year in search of wealth and renown.

Known roads may be well traveled, but they aren’t necessarily safe. Fell magic, deadly monsters, and cruel local rulers are all perils that you face when you travel in the Forgotten Realms. Even farms and freeholds within a day’s walk of a city can fall prey to monsters, and no place is safe from the sudden wrath of a dragon.

The regional map shows just a tiny part of this vast world, in a region called the Sword Coast. This is a region of adventure, where daring souls delve into the wreckage of ancient strongholds and explore ruins of long-lost cultures. Amid a wilderness of jagged, snow-capped peaks, alpine forests, lawlessness, and monsters, the coast holds the greatest bastions of civilization, including the coastal city of Neverwinter. 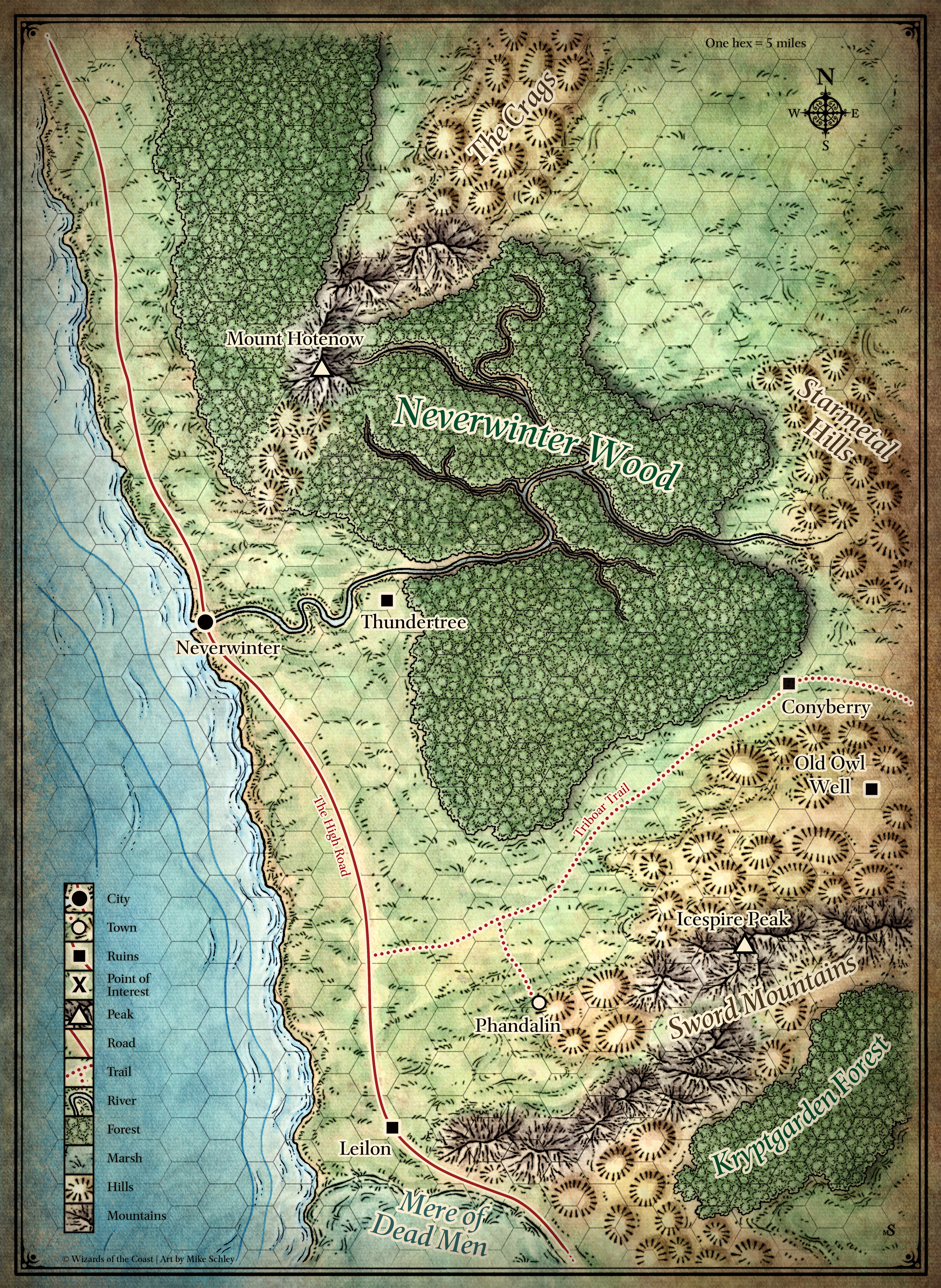 Continue story
Next > : Waiting At The Wagon