The Battle of the Golden Dragon 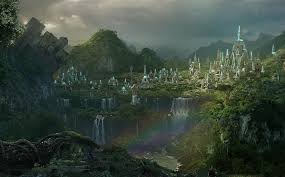 Eyere was a shrine world and was most notable for being the sight of the Battle of Golden Dragon Gate in early first Galactic Year. The capital of the world was the walled city of Eliah.

A vastly populated planet ruled by the Emorians, Eyere is considered a place of incredible holiness, the site of the Miracles of Luna, the birthplace of Saint Marui, and a loyal bastion of faith during the Gek First Spawn Dominion. Eyere is an ancient world with a long history dating back to the birth of intergalactic civilizations, with most of its history during this time having since been lost to the aeons. It is known, however, that during the Great Vy'Keen Crusade, the world was claimed by the Gek.

Under their direction, Eyere was a bastion of fanatical and dedicated worship of the First Spawn Dominion.. The forces of the Vy'Keen would only return to the world ten thousand years later in the Battle of the Golden Dragon.

Its thick forests are so dense and so teeming with dangerous carnivores that access is forbidden without a license. The forests of the world of holds the dubious distinction of having a huge population of large predators, making the beasts of that world particularly fierce and perpetually hungry.

The galaxy's big game hunters, who have to be licensed to legally hunt on its forests, are generally capable of spending days discussing which beast the 'Hunter's Paradise' has thrown up is the most dangerous without coming to an agreement. On one point, however, all agree without question: the Eyerean Atakat, while not the most dangerous, is surely the most vicious creature on the entire planet

The Atakat is a ferocious mammalian quadruped with a form and temperament resembling a bizarre blending of a terrestrial wolverine with a crocodile. They aggressively patrol an area about their den stretching for a two-kilometre radius. They attack anything and everything they can reach within their chosen territory, ripping apart any creatures they find and leaving scattered carcasses about on the rare occasions when they aren't hungry.

Today Eyere is still revered as one of the ancient worlds in the galaxy biut its influence and importance greatly diminished being of interest only to scholars and followers of the old faiths.