Walker walked the inside of his new ship running his fingers through the metal corridor walls. He could not keep the grin of his face. She was sturdy and solid. In need of a few minor repairs and upgrades but nothing that would take too long to arrange or impact it's performance.
Payment from Frost had been delivered last night. Walker had immediately set to contact the seller for the vessel as soon as the ping of the transfer sounded.
He had requested the largest part of the payment in Dobu credits. Although many systems had tried to implement their own galactic currencies, since the fall of the UBC most cryto-currencies were only accepted in the worlds or systems their were produced and inter-stellar currencies were still very rare.
The rest of payments he accepted in resources. It would allow him to have a cargo to secure a crew and even secure some trade deals to generate further income. He still had in his mind to go to the Aramar system.

He had spent the last few hours running through the ship specs and systems to ensure the vessel was not a dud. He moved into the cockpit and sat down at his knew command chair, stretching his legs over the dash board.
There was space for two pilots in the cockpit but one could do the job alone in an emergency.
He knew he would have to run the vessel with a skeleton crew for a while. He could not yet afford to hire a full contingent.

He brought up the ships specs up on his ocular display once again.

She was a blockade runner just has he had hoped for. Sleek, stealthy and fast with a Class 2-CEC Subspace Hyperdrive 11 Ion Turbine with Drive Overcharge and sublight drive assembly. The vessel measured 63 metres from bow to stern and 12 metres in height.
Configured for 12 crew members and 1000 metric tons of cargo and a pantry that could hold 1 years' worth of consumables. Three, four-passenger escape pods, and one small shuttle bay, that he would use as extra storage space until such time he could afford a smaller craft.
He pulled up the specs on armament and defence and knew this is where eventually he would have to do some updates. He could never make the ship a power house but he could easily upgrade most specs without compromising the hull and systems.
6 TaiK & BaM H8 turbolasers, 2 dual anti-ship turbolasers, 4 single anti-fighter homing missiles as well as void shield generators and ceramic hull plating.

Yes she would do nicely for now, he thought smiling. Now he just needed to find a crew. He sent a small message to Gideon through their vox link.
Time for go explore the stars and make some dough. 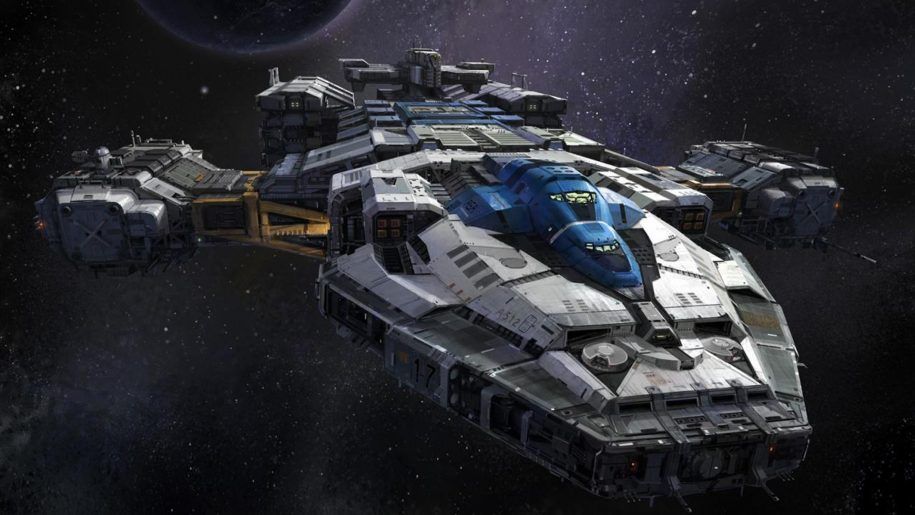