Ilvermorny School of Witchcraft and Wizardry - a play-by-post rpg

Ilvermorny Today
As might be expected of a school part-founded by a No-Maj, Ilvermorny has the reputation of being one of the most democratic, least elitist of all the great wizarding schools.

Marble statues of Isolt and James flank the front doors of Ilvermorny Castle. The doors open onto a circular room topped by a glass cupola. A wooden balcony runs around the room one floor above. Otherwise the space is empty except for four enormous wooden carvings representing the houses: the Horned Serpent, the panther Wampus, the Thunderbird and the Pukwudgie.

While the rest of the school watches from the circular balcony overhead, new students file into the round entrance hall. They stand around the walls and, one by one, are called to stand on the symbol of the Gordian Knot set into the middle of the stone floor. In silence the school then waits for the enchanted carvings to react. If the Horned Serpent wants the student, the crystal set into its forehead will light up. If the Wampus wants the student, it roars. The Thunderbird signifies its approval by beating its wings, and the Pukwudgie will raise its arrow into the air.

Should more than one carving signify its wish to include the student in its house, the choice rests with the student. Very rarely – perhaps once a decade – a student is offered a place in all four houses. Seraphina Picquery, President of MACUSA 1920 - 1928, was the only witch of her generation so honoured, and she chose Horned Serpent. 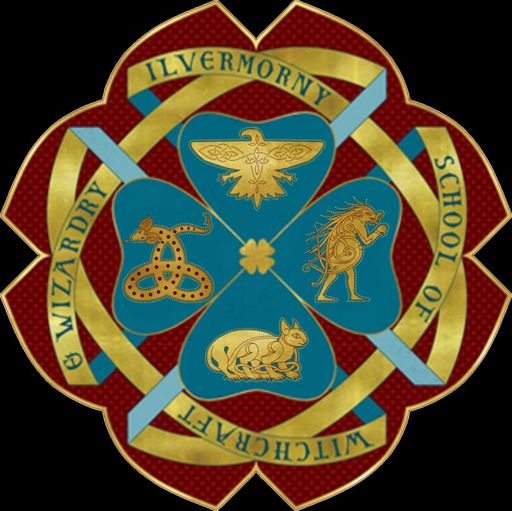 It is sometimes said of the Ilvermorny houses that they represent the whole witch or wizard:

the mind is represented by Horned Serpent; 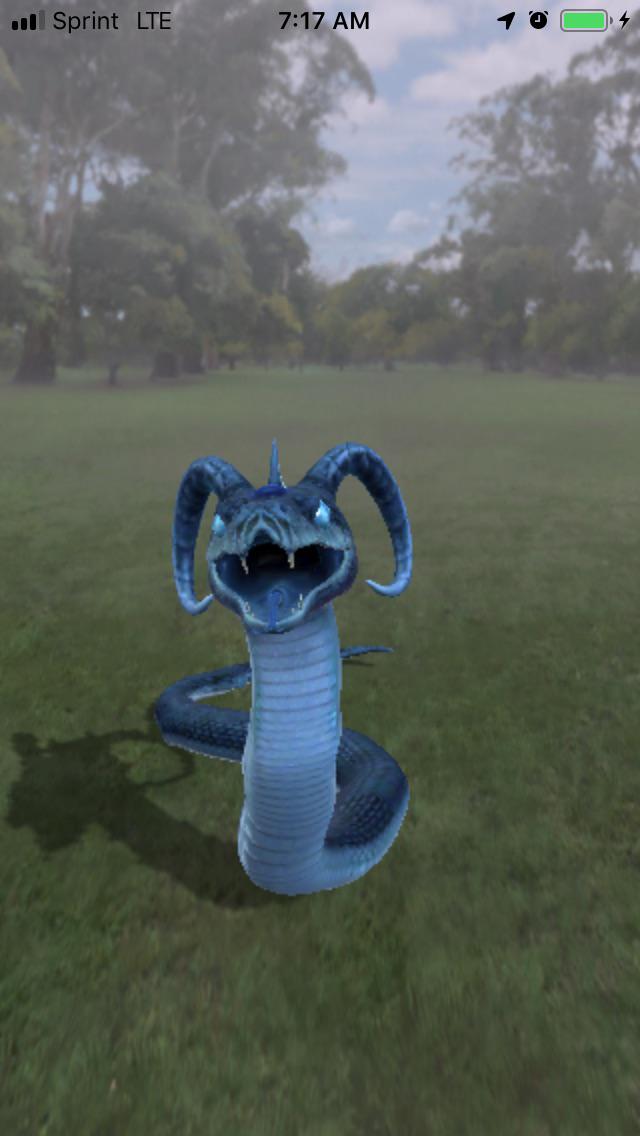 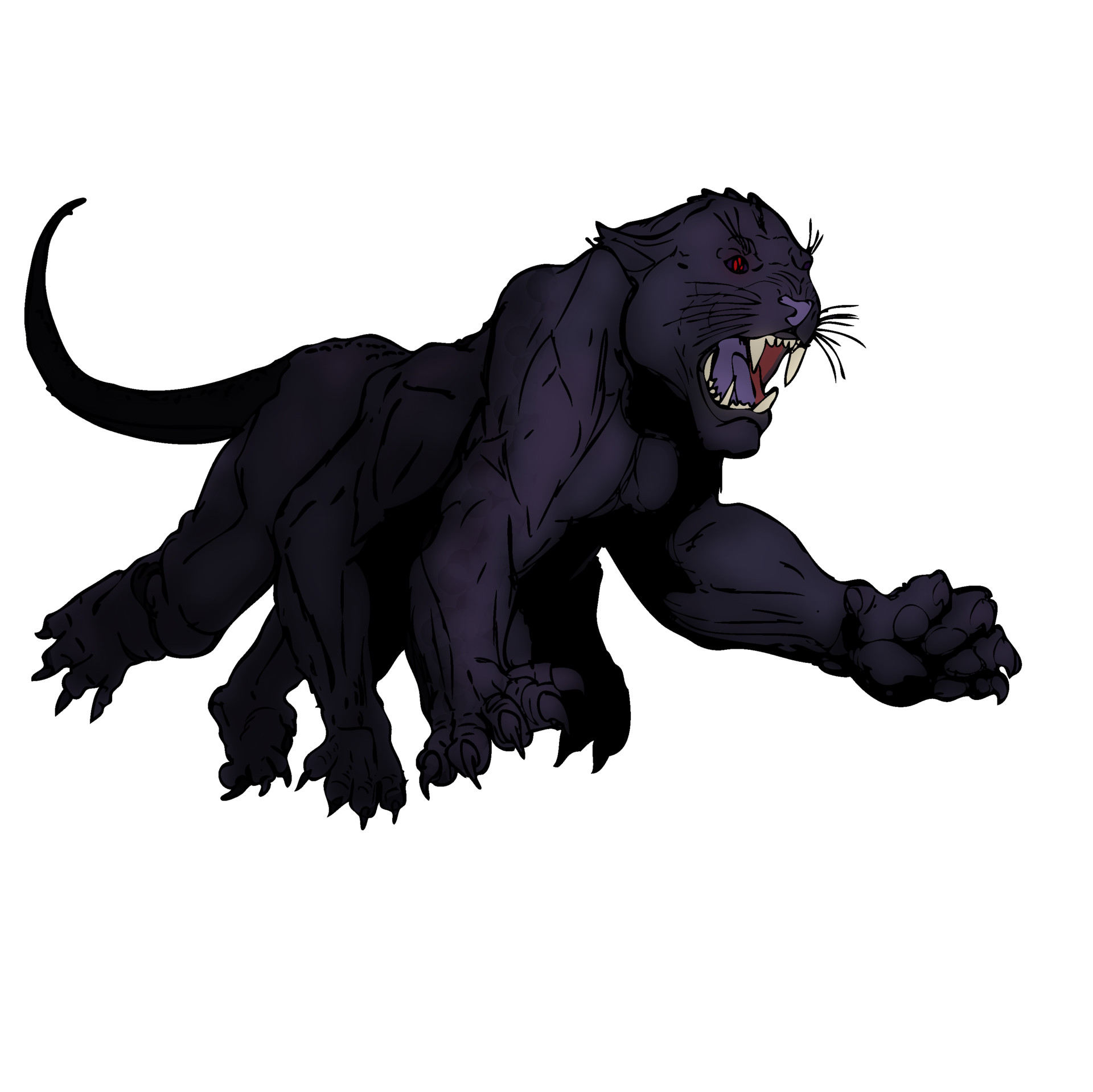 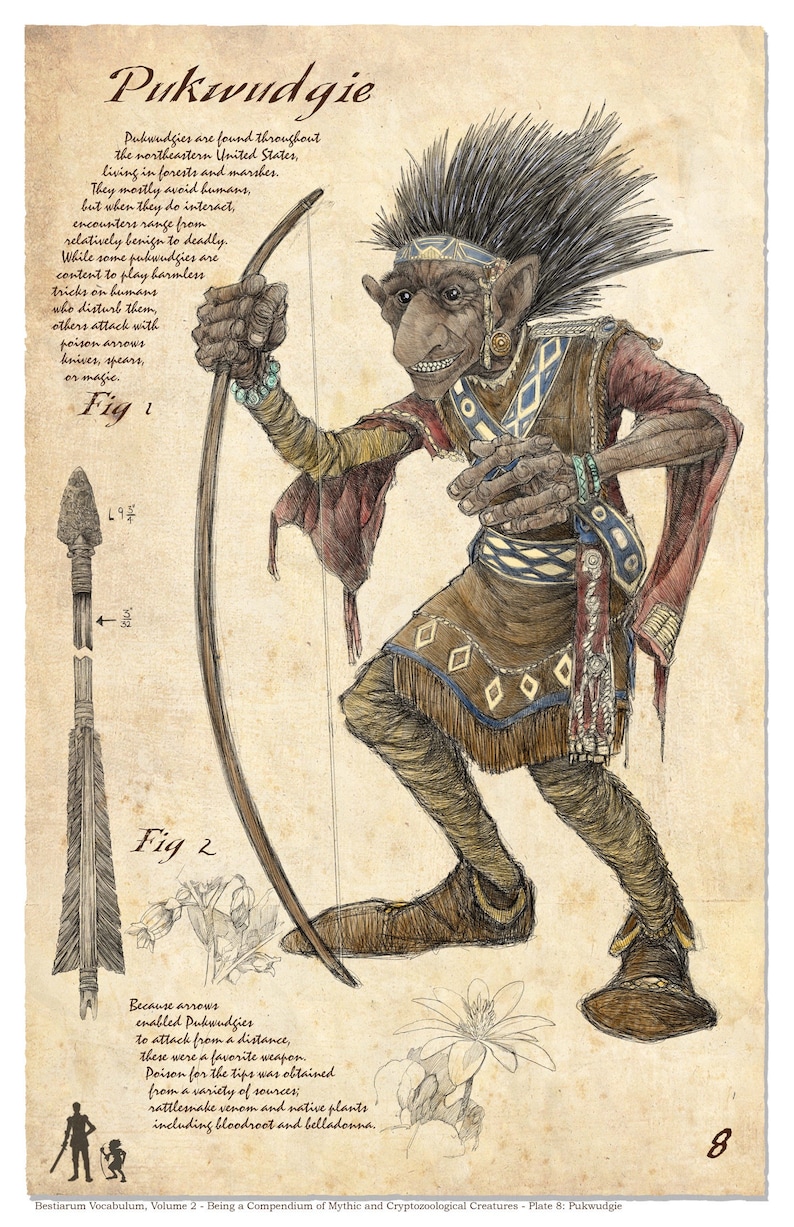 and the soul, Thunderbird. 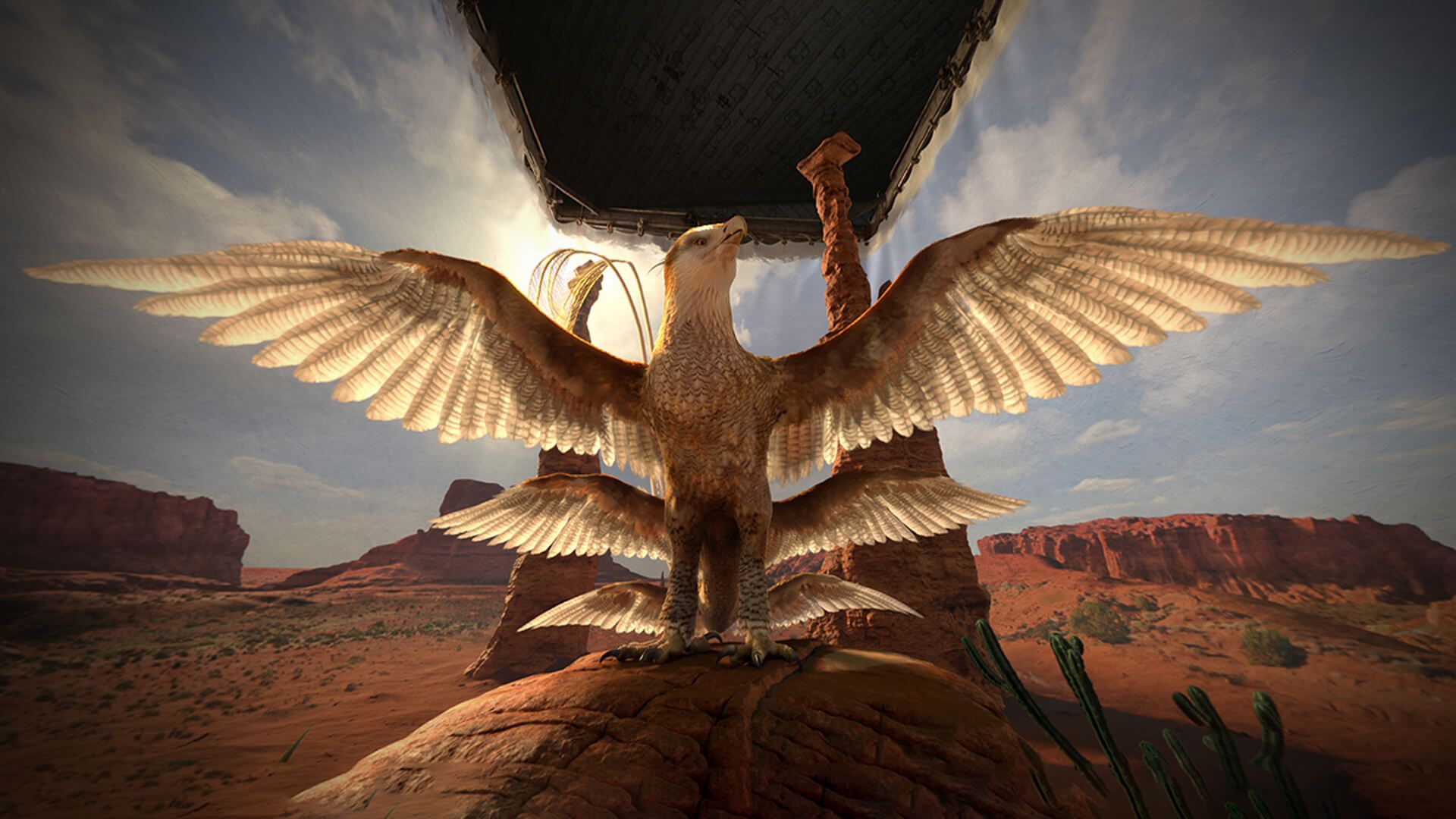 The Sorting Ceremony is not the only major difference between Hogwarts and Ilvermorny (though in so many ways the schools resemble each other). Once students have been allocated a house they are led into a large hall where they select (or are selected by) a wand. Until the 1965 repeal of Rappaport’s Law, which enforced very strict conformity with the Statute of Secrecy, no child was allowed a wand until they arrived at Ilvermorny. Moreover, wands had to be left at Ilvermorny during vacations and only upon attaining seventeen years of age was the witch or wizard legally allowed to carry a wand outside school.

The robes of Ilvermorny are blue and cranberry. The colours honour Isolt and James: blue because it was Isolt’s favourite colour and because she had wished to be in Ravenclaw house as a child; cranberry in honour of James’s love of cranberry pie. All Ilvermorny students’ robes are fastened by a gold Gordian Knot, in memory of the brooch Isolt found in the ruins of the original Ilvermorny cottage. 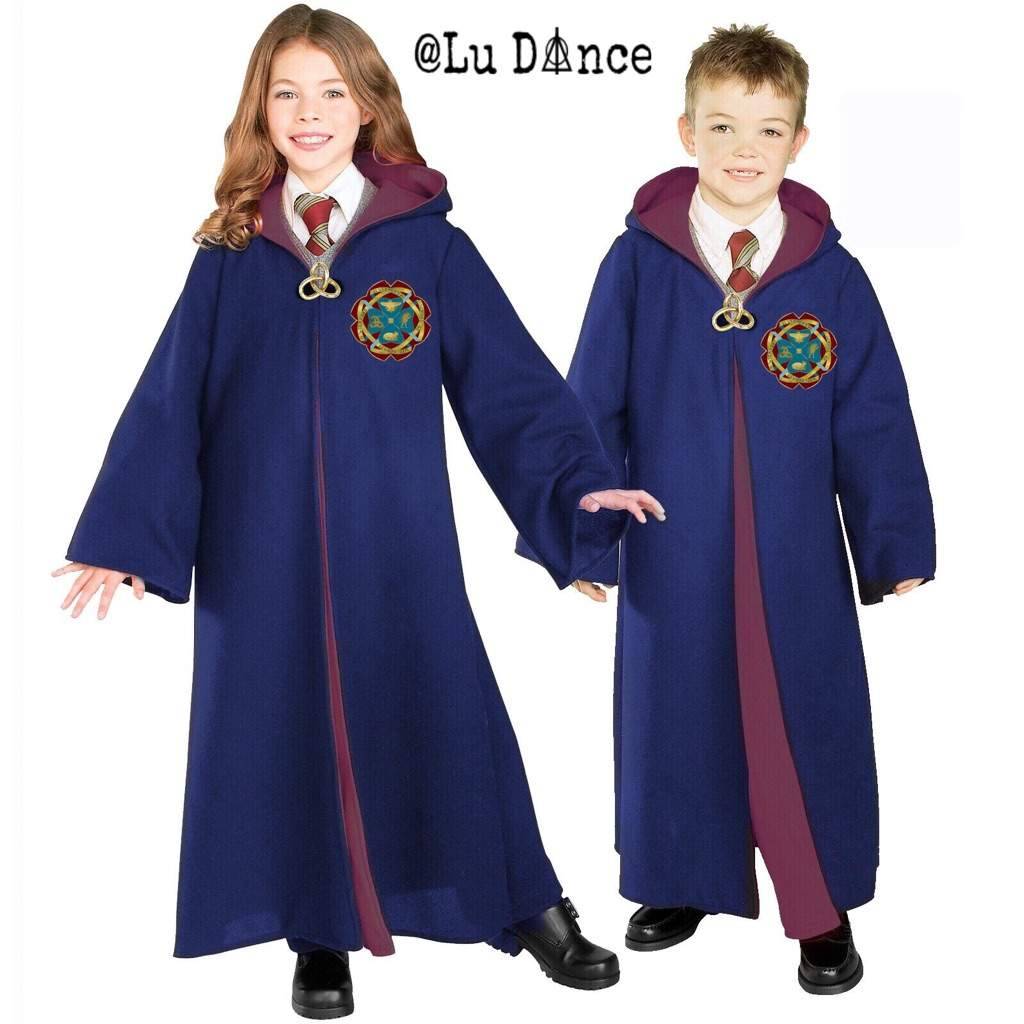 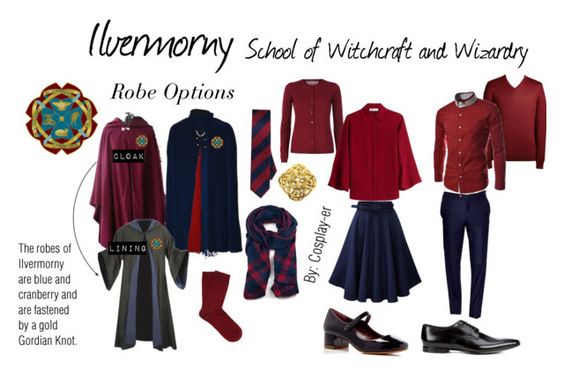 A number of Pukwudgies continue to work at the school into present day, all grumbling, all of them insisting that they have no wish to remain there and yet all of them mysteriously present year after year. There is one particularly aged creature who answers to the name of ‘William’. He laughs at the idea that he is the original William who saved Isolt and James’s lives, rightly pointing out that the first William would be over 300 years old had he survived. However, nobody has ever found out exactly how long Pukwudgies live. William refuses to let anybody else polish the marble statue of Isolt at the entrance of the school, and on the anniversary of her death every year he may be seen laying mayflowers on her tomb, something that puts him in a particularly bad temper if anyone is tactless enough to mention it.

Four Houses
Isolt and James considered the Boot boys their adopted sons. Isolt told them the second-hand stories of Hogwarts she had learned from Gormlaith. Both boys yearned to attend the school, frequently asking why they could not all return to Ireland where they could wait for their letters. Isolt did not want to frighten the boys with the story of Gormlaith. Instead, she promised them that when they reached eleven years old, she would somehow find them wands (their parents’ wands being broken beyond repair) and they would start a school of magic right there in the cottage.

This idea caught Chadwick’s and Webster’s imaginations. The boys’ ideas of what a magical school ought to be like were based almost entirely on Hogwarts, so they insisted that it ought to have four houses. The idea of naming the houses after themselves, as the founders, was swiftly abandoned, because Webster felt a house called ‘Webster Boot’ had no chance of ever winning anything, and instead, each chose their favorite magical beast. For Chadwick, an intelligent but often temperamental boy, it was the Thunderbird that can create storms as it flies.

For argumentative but fiercely loyal Webster, it was the Wampus, a magical panther-like creature that was fast, strong and almost impossible to kill.
For Isolt, it was, of course, the Horned Serpent that she still visited and with which she felt a strange sense of kinship.

When asked what his favourite creature was, James was at a loss. The only No-Maj in the family was unable to consort with the magical creatures the others had begun to know well. Finally, he named the Pukwudgie, because the stories his wife told of curmudgeonly William always made him laugh.

Thus were the four houses of Ilvermorny created, and while the four originators did not yet know it, much of their own characters leaked into the houses they had so light-heartedly named.

Growth of the School
Ilvermorny’s reputation grew steadily throughout the following years. The granite house expanded to a castle. More teachers were recruited to meet the growing demand. Now witch and wizard children from all over North America were being sent to learn there and it became a boarding school. By the nineteenth century, Ilvermorny had gained the international reputation it enjoys today.

For many years, Isolt and James remained joint Headmaster and Headmistress, as beloved to many generations of students as members of their own families.

Chadwick became an accomplished and well-travelled wizard who authored Chadwick’s Charms Vols I – VII, which are standard texts at Ilvermorny. He married a Mexican Healer called Josefina Calderon and the Calderon-Boot family remains one of wizarding America’s most prominent today.

Prior to the creation of MACUSA (the Magical Congress of the United States of America), the New World was short of wizarding law enforcement. Webster Boot became what would now be known as an Auror for hire. While repatriating a particularly nasty Dark wizard to London, Webster met and fell in love with a young Scottish witch who was working at the Ministry of Magic. Thus did the Boot family return to its home country. Webster’s descendants would be educated at Hogwarts.

Martha, the elder of James and Isolt’s twins, was a Squib. Deeply loved though Martha was by her parents and adoptive brothers, it was painful for her to grow up at Ilvermorny when she was unable to perform magic. She eventually married the non-magical brother of a friend from the Pocomtuc tribe and lived henceforth as a No-Maj.

Rionach, the youngest of James and Isolt’s daughters, taught Defence Against the Dark Arts at Ilvermorny for many years. Rionach never married. There was a rumour, never confirmed by her family, that, unlike her sister Martha, Rionach was born with the ability to speak Parseltongue and that she was determined not to pass on Slytherin ancestry into the next generation (the American branch of the family was unaware that Gormlaith was not the last of the Gaunts, and that the line continued in England).

Isolt and James both lived to be over 100. They had seen the cottage of Ilvermorny become a granite castle, and they died in the knowledge that their school was now so famous that magical families all over North America were clamouring to educate their children there. They had hired staff, they had built dormitories, they had concealed their school from No-Maj eyes by clever enchantments: in short, the girl who had dreamed of attending Hogwarts had helped found the North American equivalent.

Quodpot
A variant of Quidditch, Quodpot was invented in the eighteenth century by Abraham Peasegood, and is the most popular wizarding game in the United States. Peasegood travelled to the United States from England, and, during the trip, his wand came into contact with a Quaffle in his trunk. The resulting interaction meant that, when he took the Quaffle out and began throwing it around, it exploded in his face. Having a lively sense of humour, Peasegood and his friends set about recreating the effect on a series of leather balls, and the game of Quodpot was born.

Centred around the explosive properties of the ball, known as the Quod, a game of Quodpot is played between two teams with eleven players each. The players attempt to get the Quod into the pot at the end of the pitch before it explodes. When the Quod is safely in the pot - which contains a solution to stop the Quod from exploding - the scorer's team gets a point and a new Quod is brought into play. Any player in possession of the Quod when it explodes must leave the field of play.

Quodpot is immensely popular in North America, but is considered a minority sport in Europe, where the majority of wizards remain faithful to Quidditch.