Maelstrom is a complex story created by numerous writers over several months. It is dark, it is Steam Punk and it is sometimes violent. Ok it is always violent. It is a slower paced game with a small community and a ‘long post’ format. It is mature in both content and play style. We allow god modding and encourage joint posts. For people who love to read as much as they love to write it is a fantastic story to be part of. But how on earth do you join a story that is complex, has numerous characters in play and has been running for a while? It can be an intimidating and time consuming affair. 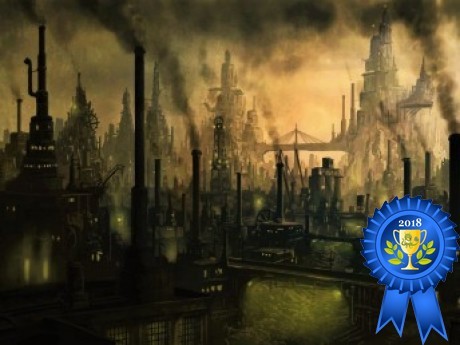 I am going to write a series of posts to help people understand the setting and give writers options in joining the story. This first post will concentrate on the world itself and the basic premise behind the game.

Firstly, the game is named for a thick canopy of poisoned cloud that surrounds the world called the Maelstrom. It has blocked out the sun and reduced the planet to a dark wasteland. The inhabitants of Dusk the City in the game refer to the world outside as the Darklands, they are empty, barren and deadly.

The Delve is a great underground mine in the Darklands. The shanty town of Graymire is built around its entrance. From the Delve we mine the substance known as Flagesium. This is a coal like substance that can be refined as a power source or used as an agent in other fantastic technologies. It is highly combustible and enhances the natural properties of existing elements and compounds. It also creates mutation in organic life forms.

Flagesium is carried by steam train to the vast city of Dusk the last Bastion of humanity where it is refined. Dusk is an oppressive state led by a despotic peoples council. The ruling families of Dusk live in Highholm and lord it over the poor and oppressed who mainly reside in the slums of the Sprawl. There are various rebellious factions in Dusk including the Rising Star and Red Crew who seek to overthrow their oppressive overseers.

Once refined, Flagesium is sent by Airship to the vast floating city of Elesium. This City above the clouds is also currently closed to writers, but is vital to the story. Skyriders deliver loads of Flagesium to the city in the sky in exchange for food, fresh water and medical supplies. Dusk relies on these supplies to survive in the Darklands and without Flagesium Elesium would fall from the sky and destroy Dusk in the process.