Today we touch on on of the most popular shared worlds in existence.
Dragonlance 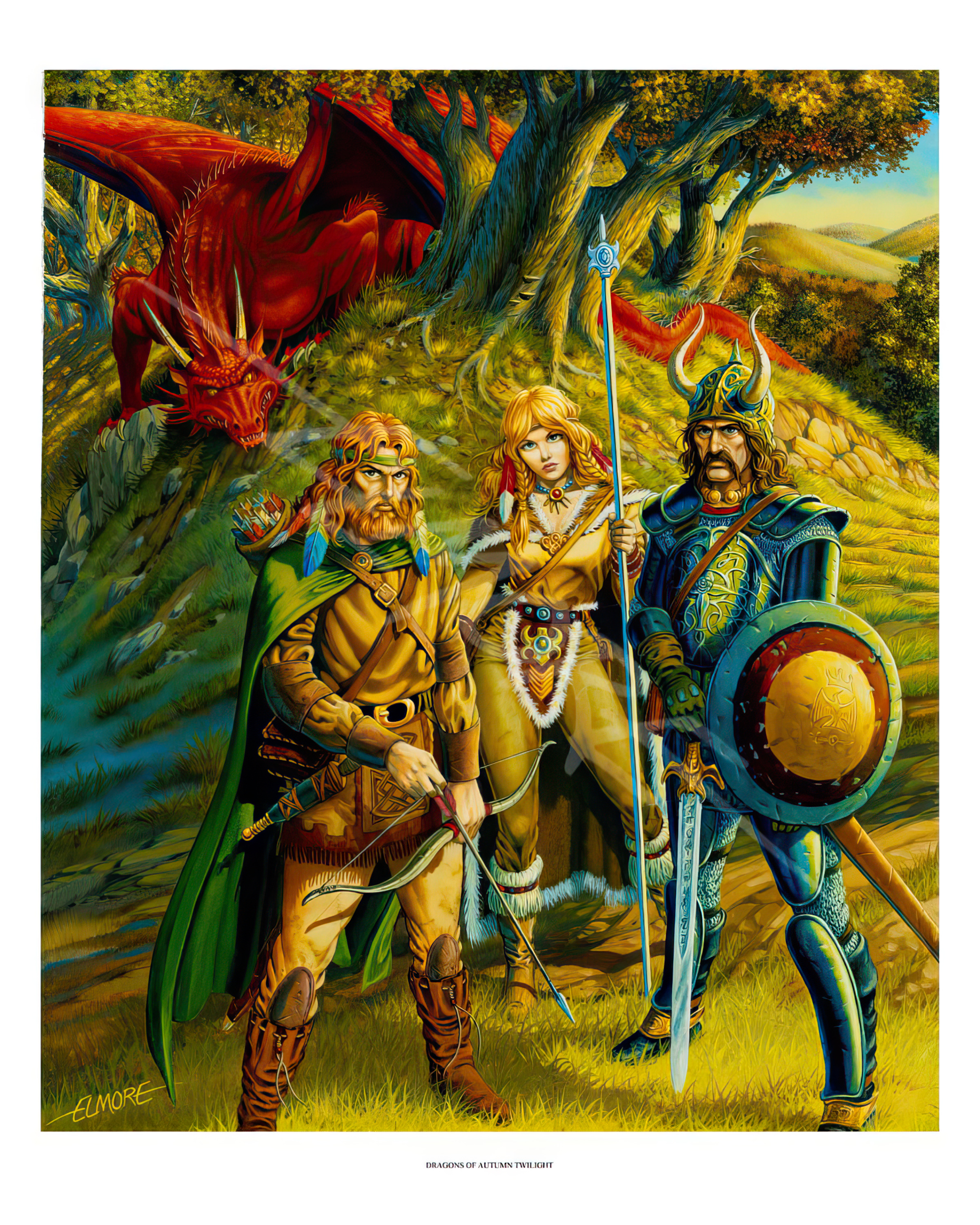 Dragons of an Autumn Twilight was the 2nd fantasy book I read that was a novel and not a game like the previously featured Fighting Fantasy Series. I never played the RPG version of it but as the years went by I could see the monster this world was becoming and how it was inspiring so many writers to, well to write...

Dragonlance is a shared universe created by Laura and Tracy Hickman, and expanded by Tracy Hickman and Margaret Weis under the direction of TSR, Inc. into a series of fantasy novels. The adventures during that game inspired a series of gaming modules, a series of novels, licensed products such as board games, and lead miniature figures.
In 1984, TSR published the first Dragonlance novel, Dragons of Autumn Twilight. It began the Chronicles trilogy, a core element of the Dragonlance world. While the authoring team of Tracy Hickman and Margaret Weis wrote the setting's central books, numerous other authors contributed novels and short stories to the setting. Over 190 novels have used the Dragonlance setting.

Dragonlance is set on the world of Krynn. The majority of the novels take place in the various regions of Ansalon, a small continent, though some have taken place on the continent of Taladas, located northeast of Ansalon. The world's major gods are the High God and his children: good Paladine, neutral Gilean, and evil Takhisis. The gods are opposed by Chaos, who seeks to destroy Krynn. Depending on the time period, the evil chromatic and the good metallic dragons are rare or plentiful. Humans are Krynn's most common humanoid race, but elves, dwarves, kender, gnomes, and minotaurs occupy the world as well. Clerics derive magical powers from their gods, and wizards derive their power from the three moon gods, Solinari, Lunitari, and Nuitari. . During Krynn's various wars, armies of draconians are used as troops. Draconians are created by corrupting a dragon egg, thereby creating a reptilian humanoid. The eggs of good dragons create evil draconians, and vice versa.

Fictional history
The history of the world of Krynn, and thus the settings for both the novels and gaming supplements, is roughly split into five separate ages. The first age is the time of creation, when the gods are born and Krynn is formed. The Age of Dreams, the second age, is marked by the rapid growth of the world's first great civilizations and the appearance of myriad new races. This era is also marked by three great wars between dragons and their minions. Following the Third Dragon War, in the Age of Might, the Cataclysm obliterates the great empire of Istar and changes almost the entire surface of Krynn. A three-hundred year depression follows this event, in what is called the Age of Despair. This period also marks the War of the Lance. When Dragonlance was first introduced to Dungeons & Dragons, events such as the Lost Wars happened during The Age of Despair. Later Age of Mortals novels and game supplements took Krynn into the Fifth Age (the Age of Mortals).

So if you have not ever read a Dragonlance novel pick one up. You will thoroughly enjoy it!!!