Spacestronauts is a cooperative writing/roleplaying game wherein the players must work to create pulp fiction stories for the 1950s Spacestronauts Men's Magazine. These stories are schlock, plain and simple, sold for 25 cents a book and holding very little literary value. But isn't that the glory of it all?

Basically, I made this game because I don't have a good history sticking with games, mostly when life or work gets in the way. But still, I love to write on this platform, and had a lot of fun adding to it! So, I decided I would make a more casual game, which allows people to roleplay and tell stories, but with limits and rules to make them more tight, fun, and accessible!

The goal is simple:

You must roleplay a pulp storyline for Spacestronauts Men's Magazine.

The rules are, too:

First, you must "set up" your storyline, creating a post naming the storyline, giving it a cover, and recruiting players to join you in it. Your characters may be recurring (from other editions), or created just for this particular story. The storyline must correspond to some 50s retrofuturist art, so that that can be the cover for that edition.

Secondly, you must choose your page count. The page count is a number, between 10 and 30, deciding the length of this particular edition. Like real pulp fiction, these stories will be short and hard-hitting, and contain very little fluff so that fewer pages must be printed. Each page contains a certain number of parts, two for each player character involved. So, for instance: if there are only two player characters in a page, they can have up to four parts; two for one PC, and two for another. These parts contain the actions and reactions of a character, and this makes up a page.

In this way, stories must be told quickly, and no PCs action can contain much fluff that doesn't drive the story. The story will always be moving, and no PC can waste their time dilly-dallying because they are limited to two parts a page!

Thirdly, you must choose a host for this story. The host takes up the same space as their PC, having to say the set dressing and actions in the same part they describe their character's actions and reactions. The host tells the story, and sets up the overarching plot for that edition. It is their job to keep the story in perpetual motion, and bring it to a quick and satisfying conclusion (or a sloppy, quick one, as was common with many pulps in the pulp fiction era, fighting page limits).

The galaxy of Spacestronauts is an eccentric place, with innumerable additions that could be made by imaginative hosts and players! The only rules to adding to this universe is not using things from other franchises, not conflicting with other players' additions, and sticking to a 50s retro futurist theme!

A great many ideas can be drawn from 50s science fiction art, which can be made into incredible pulp tales, bursting with action, adventure, intrigue, romance, and everything else!

Most PCs will be Spacestronauts, which can be of any race, large or small, mechanic or biological! But there can be other sorts, as long as the stories are weird and interesting, and they aren't risque enough to get cut by the censors!

Are you an interested writer, looking for work? Well, come sign up to write for Spacestronauts Men's Magazine! "Worlds of adventure, for only 25 cents!"

The starting commission is one cent a word. 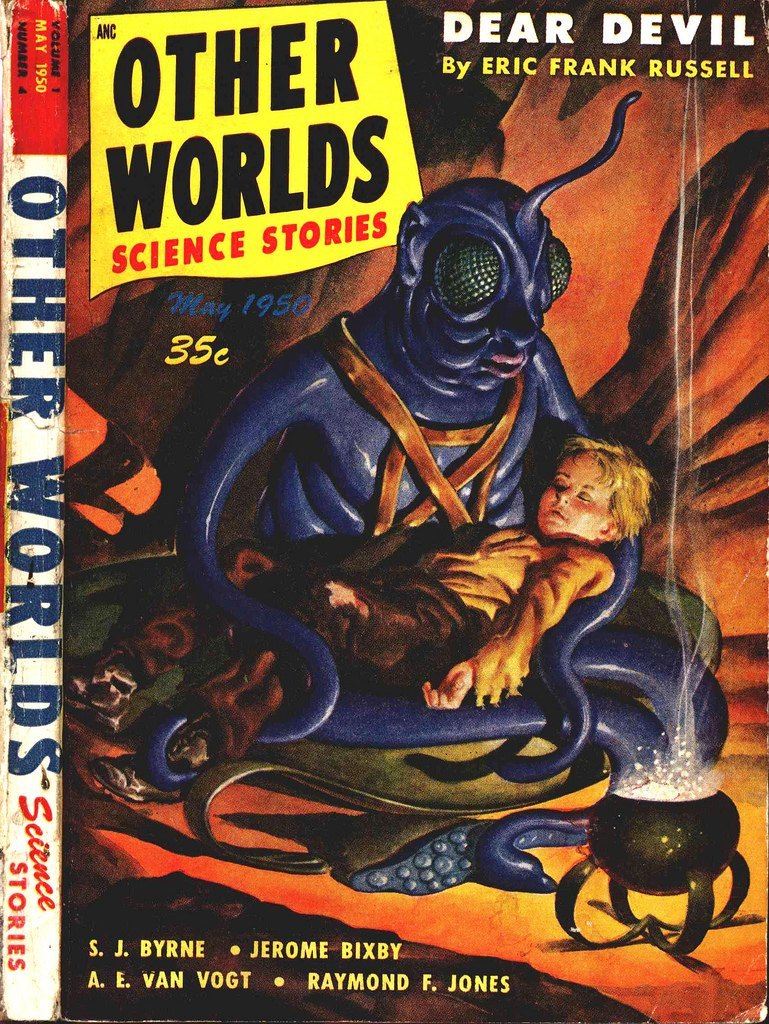 (A Jotz holding a Zooman child.)