The man settled in for sleep. Crossing this desert landscape had been one of the more challenging things he’d ever done. Pressing his back against the stone wall of the small cave. Though rocks blocked the view from one angle he did his best to hide himself fully within the small space. The wind outside whistled and howled as the sand storm moved in, and along with the chill that came from the nights in the desert the cave was a welcome respite.

Digging in the small pouch tied to his waste he took out two small smooth stones.
He lightly smacked the two river rocks together and quickly sat them down, as they began to glow a light orange, then to a dull red. Producing heat, and warming the space around him, and filled the small space with a candle like glow.

Taking the sheathed sword and holding it upright so the guard rested on his collarbone, the man watched the glowing stones light ebb and flow, breathing to match it. Letting his head dip he drifted off to sleep, the wind and pulse of the stones lulling him into a much needed slumber.

The man opened his eyes, expecting the dark, cold confines of the cave. But his vision was filled with a golden hour light, just before sunset. The smell of cherry blossoms in the air, a cool breeze, a splash of a koi in the nearby pond, the pillars and architecture he knew so well…home.

Why was he here? He’d fallen asleep inside a cave…hadn’t he? No…wait he knew this day. He’d seen it before, but this time felt different… off somehow. The feeling of eyes on him sent a jolt through his sense of danger. Calmly he reached his hand to the hilt of his sword, his other hand on the sheath he pressed his thumb against the guard, slightly freeing the habaki, ready to draw on a moment's notice.

He began to walk around the porch surrounding the main part of the home, eyes peeled, moving slowly and silently. For all the sounds of nature he’d heard not a moment ago it was now still, like the moments before a downpour. All he heard was his heart beat, and his slowed breathing.

It was a strange feeling, like being watched by a predator…or most so predators. It reminded him of when he was a child, looking into the forest after hearing a howl and feeling the wolves lurking just out of sight, this feeling was the same. Feeling something just beyond his vision, vicious and hungry for blood.

He began to stalk the grounds, moving slowly, darting between large gaps in cover. But he blinked, and everything changed. As if time skipped forward several beats. The moment that had solidified that something was truly wrong with his lord and the other members of the clan. It was like it was on repeat, he’d circled the ground's outer edge, his clan mate had done the same in a counter rotation. He knew they’d meet soon to strategize the next move.

This…this was the dreaded part. She wasn’t looking at him, not yet. Her head was tilted down slightly as she swept the leaves and cherry blossom petals from the stone work. She was lost in thought. And he knew he could move quickly between the opening in the fence to the adjacent side. But as he crossed he saw a flash of color dash across the grounds. His clan mate, making a mad break for the clearing and towards the sweeping young woman. Just as he went to shout a warning, that maybe she could get away. With her back to the clan mate, his eyes grew wide as the sword appeared through her chest far enough the clan mate had sunk it to the guard.

The look on her face was burned into his memory, she saw him. Looking down at the blade in shock, tears running down her cheeks, and blood rolled from the edges of her lips as she looked up at him. Reaching out pleading for help, before foot violently pressed to her back kicking her free of the blade only to crumpled to the ground. Reaching out one final time in a fleeting attempt for some sort of last attempt at survival. The clan mate looked down admiring his work before darting off, vanishing behind a row of bushes. Not having the kindness to finish her off, only letting the poor girls suffer, needlessly taking a life.

Even if this was an echo of the past, a dream made for him to relive that day he did the same as he had done each time. Ran the gap between them. Placing a healing elixir in the girl's hands. It would act quickly to heal her wounds. Though the speed at which this particular mixture worked was so quick it tended to leave scars, and would likely leave her slightly impaired. But that was far better than being dead.

Leaving her, as that part of the dream faded to vapor behind him. Like the marine layer fading in midmorning. He was fixated on finally confronting the man this time. Knowing full well what his answer would be, he’d heard it before. But was seeking new insight into his words. Perhaps to know where things went wrong. Though the man knew it was long before this moment that things had gone bad.

It had started months ago, his master had begun to act strangely. Irrationalities were the first of the down slide. Beginning to believe the other clans were out to get him, and that he was the only one smart enough to see it. Convincing the others into his delusions. The others hadn’t questioned him, and those that did were sent on missions they would not return from. All but him, he had, but by this time his master had lost the plot completely.

He’d not seen everything, but knew bits and pieces, enough to get an image of the events. The last straw was this mission. Something in his master had snapped and taken all his men along with the sanity. And he was going to find out what had caused all this. Or at the very least get away before it took him too.

The man made his way forward. Deeper into the memory. Before him lay a torii and a long stone staircase leading to the man home. Where he knew the rival clan leader and his child were. As he approached a feeling of darkness washed over him, heavy like a wave in a raging storm, accompanied by a guttural growl.

He whipped his head up, just in time to see the shadowy figure leap from the torii. The man followed it with his eyes as he landed with a stone shattering landing. The shadowy figure was crouched in a squatting position before standing to full height. A towering imposing beast nearly two heads taller than the man. 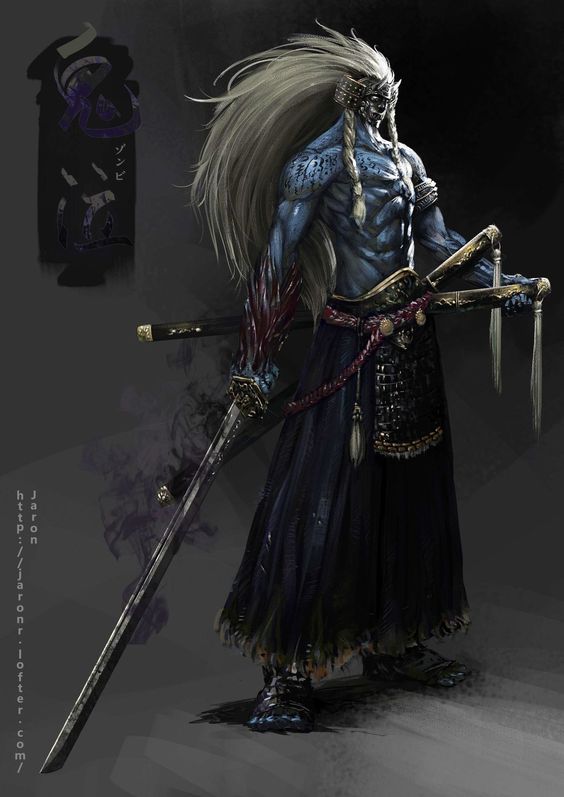 The beast drew one of it’s two blades. Holding it in one hand, shoulders heaving with its heavy breath under the tightly wound up muscle. The man took a calming breath, placing his left hand on the tsuka, and right hand on the saya near the koiguchi and thumb against the tsuba, a light but firm press freeing the habaki. Inhale…exhale…inhale…exhale. His body was loose, focused. The man was highly practised in Iaijutsu. And though the thing before him was once his friend, it was now no more than a monster. As the beast charged the man drew his blade at the last moment, a crack of thunder just as the blades clashed, he felt the stinging jolt rock his arms. But his dream, like a bolt of lightning cutting the sky, was gone as quickly as it came. And the man was back in the waking world. But his sixth sense tells him he would soon not be alone.

The moon was hanging high in the sky still, its silvery glow made a chalky white by the gray ashy sandstorm just outside the cave have an eerie glow. Scantily enough to cast any real shadow but enough the cut shapes dully from the backdrop. As the man peeked slowly from the mouth of the cave in the distance walking with purpose was a hulking figure. Retreating to the interior he repeated the motion from the dream. Readying his sword for the man coming his way.