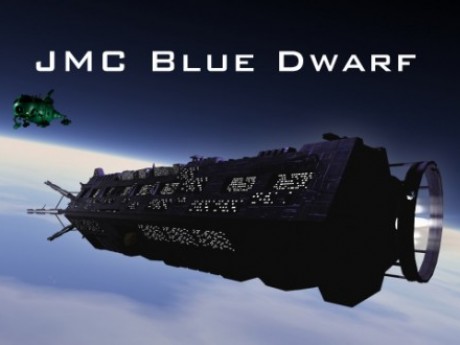 It’s all good and if you’ll spare me a few minutes, I’ll explain why :-)


So, what is it?
It’s a game - A collaborative writing project that has been running for eighteen years; which makes it practically archaeological in terms of interweb years. I personally have been involved for about half that time, having blundered in with the vague idea that it might be fun to do a bit of writing.

It was David Ball, the guy we can all thank for Ongoing Worlds, who started the game, back in 2000 on Yahoo Groups, with the idea that the crew of the Blue Dwarf had been tasked with looking for their recently vanished sister ship, the Red Dwarf. This gave them an excellent excuse to just bum around and get up to all sorts of trouble in space.

As you can probably imagine, a lot has happened since then. We’ve had wars with aliens, time travel hijinks, and have destroyed at least one reality along the way, but the game has suffered from sporadic posting of late - for the most part because real life has got in the way for a bunch of our players - and that (hopefully) is where you can help.

Now, before you turn away in disgust, let me explain...

There was a Fumbler post here recently, bemoaning the lack of original sci-fi here on ongoing worlds, but that’s us. That’s Blue Dwarf.


I’m not having that. Isn’t it based on that Red Dwarf TV show?
Kinda. There’s a city sized star ship in the game, with Holly, Starbugs and psi-scanners, but beyond that, everything is original.


Everything?
Yep. In this game, humans were pretty late getting into space and had only just started exploring the neighbouring star systems and meeting interesting new aliens, when about 70 years ago, the Earth was destroyed. How or by who (if anyone), nobody knows.
This left the few million people left lucky enough to be off-world to drift across the galaxy, or congregate in enclaves like the Dwarf.


That sounds like a lot of backstory
Nope. That’s about all there is at the moment. We destroyed our last universe not so long back when we took down a meta-entity at the end of time that used to be the Queen of England.

We’ve also explored alien jungles, robbed a Vegas casino, battled alien mind parasites in Victorian England and travelled through wormholes to distant parts of the galaxy, to name but a few things.


That all sounds a little daunting - Do I have to read up on 18 years of backstory?
Nah. I’m a mod and even I haven’t read everything. Our stories are episodic and on a good run, tend to last a couple of months; so you can jump in at any time and (other than the welcome e-mail to get you up to speed), you’ll have very little to read to catch up on.

We also like our players to come up with plot twists as well.


Wait, what?
Yep - We like our players to drive the story as much as the mods.
The game has been run as a collaborative storytelling project since forever, so we all write for each others characters and evolve the story at the same time.


That’s crazy talk. How does that even work?
It works very well
Let me give you an example:
Say that the characters had been arrested and thrown into prison. You could post how they deactivated the lightning fields to allow everyone to escape their cells, only to finish with the group being spotted by the guards. The next player to post could resolve that situation, but have the psycho from cell block H beat the group to the escape shuttle, and so on...


Can I just go crazy and throw anything into the mix?
As long as it’s in keeping with the story, absolutely go for it.
My job as a mod is to guide things and keep things moving along.


What if I’ve got a great idea for a story - can we do that?
Sure - If you’ve got a burning desire to write anything, from a crime story set in the slum districts of an alien space station, to a disturbing encounter with cephalopods on a safari trip, just let me know what you have in mind and the chances are, we can schedule it in. This is everyone's story, so we all contribute ideas :-)


What sort of characters can I have?
Most of the characters we’ve had in game are human, but we’ve had aliens before and even a giant hamster. The general rule of thumb is no superpowers - This makes everyone as good and bad as everyone else, and means that nobody can resolve every situation, just by being consistently awesome; because that would be boring, right?


How often do I have to post?
Often enough to keep things moving - How’s once a week sound to you?
Our posts tend to be a little longer than some games, but I’ve noticed that there are a bunch of other games on Ongoing Worlds at the moment that are very similar in posting frequency and length, so we’re not all that unusual.


Okay, so what’s going on in the story right now?
At the moment, we’ve got a rescue mission going on. One character has been stranded on a derelict colony ship for the last three weeks, and a couple of ships are on the way to the rescue.


Is that it?
Well, one of the other ships might be pirates, or salvagers, or anything really... It depends on what our players come up with. (See what I mean about driving the story?)
Oh, and we’ve no idea where the Blue Dwarf is either.


That sounds tricky to get involved in - What if I want to join right now?
Well, I reckon it shouldn’t be a problem to throw in another shipload of cutthroats, scientists and health and safety inspectors that's responding to the S.O.S - your character can be on that. After that, we'll engineer a situation to throw everyone together and see what happens.
I’m sure we’ll all get on famously, once we get to know each other ;-)


Where’s the story going to go after this?
That’s entirely up to you.

We’ve lost the Dwarf and there’s no hurry to find it again. It’d be nice to explore the galaxy a bit and meet a few aliens; maybe have a run in with the law and start a war or topple a regime or two. Perhaps there are strange ruins that need exploring, or you’d be willing to undertake some morally dubious work to clear your character’s gambling debts?

Do you have any ideas?

We’d love to hear them - Why not come on over and join us?


Wait! - I have other questions...
No probs. Just bang them in below and I’ll answer them as quickly as I can.