OOC - Beyond the Ragnarok Chapter 4 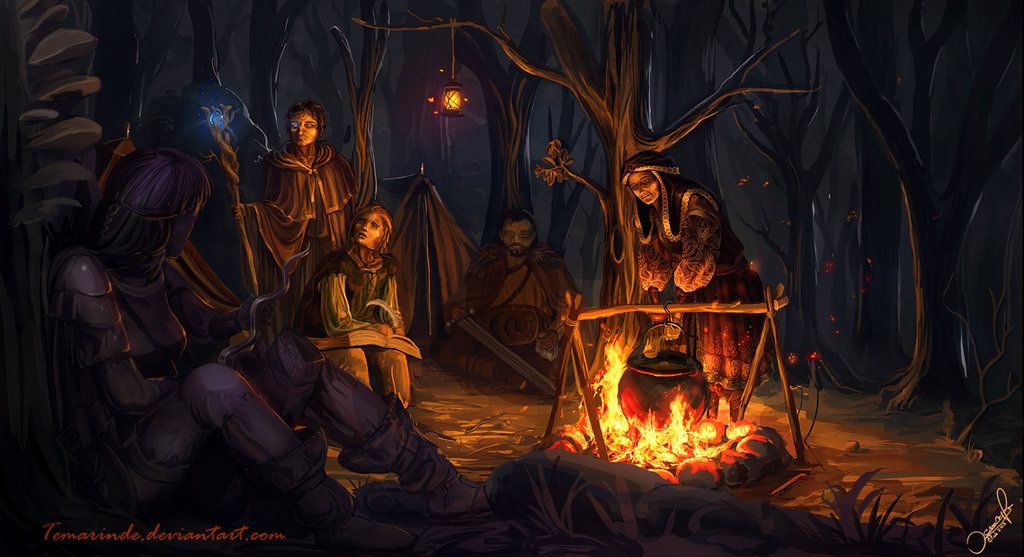 Luna eventually slowed down so that the rest could catch up to her. “Tiella, I’ve only used that spell a hand full of times and I get a distinct feeling that there is a reason I’m drawn to the shadows. It’s like there is something calling me. It is definitely not the Harlequin, his magic feels different… I do not trust him Tiella, did you know Hella was his sister? She is Loki’s child” Luna poured out the words, her worry overflowing.

She stopped suddenly looking around. There was a strange look on her face. “ I think we may have company” she said confused by the strange feeling.

Balar raised his arm for them to stop. He peered into the darkness and motioned for them to be quiet. A distant grunt broke the silence and the sound of heavy movement.

He grimaced and pulled his axe clear of his belt loop.

"Trolls." He whispered. "Several off them."

"Are they on their way back to the plains or have they picked up our scent." Tiella asked.

"Could be either." Balar answered, "But until we know for sure that they are aware of us we should stay quiet and move away from them."

"No shit." murmured Majvoc as he walked on ahead, his bow in hand.

“Brilliant” Luna muttered. She was not thrilled. They continued to head north. But now they were more careful not to make a sound.

They walked through the rest of the night. The sound of the trolls persisted for a time, grunts, snarls and the occasional squeal of pain s they came across unsuspecting animals in the dark, but at last the sounds grew distant and faded. At some point Majvoc slipped away into the shadows and it wasn't until nearly dawn that Balar passed comment.

"Wonder where he's gone." he grumbled.

"He'll be back." Tiella replied absently, she was more worried about their elf companion who looked distant and confused by something.

They finally entered a small copse at the base of a wide green valley and as the sun rose over the crest of the hills ahead they settled down for a short rest. Balar lit a fire to get them warm while Tiella prepared a small meal from the food in their pack.

"Do you think we lost the trolls?" She asked after a moment.

"Probably." Balar replied taking a bite out of a hunk of bread. "But where we are going we will meet plenty more." he gestured off to the north.

Luna sat quietly. “I wish it could be night all the time” she sighed. She looked around and watched as the shadows once cast by the moon began to disappear and were replaced by bright sunlight.

Luna looked at Balar and Tiella . “What exactly is the Harlequin. Did I he pay that man to attack me or just disrupt your tavern?” she asked then watched them. Her pale skin was starting to turn pink from the sun.

"What is Harlequin?" Tiella shook her head as she stared into the dying embers of the fire. "Besides being an utter bastard you mean?"

Luna smiled but did not respond so Tiella went on, "He is the son of a god. His mother I think was human."

"No, and that pisses him of something rotten." Balar interjected. "He is powerful yes and long lived but he is not immortal."

"And his magic?" Luna asked.

"It is borrowed power and divine parlour tricks. He dips into energies from the nine realms and channels them to suit his purpose."

"That is impossible," Luna objected.

"For a human or an elf yes." Tiella said, "but he is something more."

"And the trouble at the inn?"

Tiella heaved a sigh of regret. "It seems likely he planned the whole thing. He wanted to goad you into using magic knowing that it would rouse the ire of the mercenaries at the inn."

"So he could ensnare you in his plans. Balar and I owe him a debt and we will pay it."
"I owe him nothing. I will pay him nothing." Luna snapped.

"You are here." Balar said, but then more softly, "but of your own free will, and that may make all the difference"

Luna pondered their words. She looked across the horizon where the burning sun was beginning to rise. “Perhaps then it’s not His sister we need to worry about. Perhaps it’s him how we should be fighting “ she said not really to anyone she was just thinking. “ the shadows they said we would find help in the mountains, I think they’re afraid of him” Luna said.

Tiella and Balar exchanged a glance at her words. After a moment, Balar spoke,
"You may be right, but the debt must still be paid." He clutched the amulet that hung around his neck. "I will give him his three lives and then I will tear his bloody heart out myself if it can be done. If you wish to hunt him down yourself I wish you every success."

"Tell her about the amulet." Tiella urged and Balar growled for her to be silent.
"Tell me what?" Luna asked.

Balar glared at Tiella for a moment and she gave a nod. Slowly Balar drew out the amulet he wore beneath his tunic, it glistened in the morning light.

"It is a device of the elven people, from before the breaking." Tiella explained, "It binds my life force to his." She drew a similar amulet our from her own tunic. "It allows us to live a full life together."

"This is your bargain with the beast?" Luna asked.

"It is." Tiella admitted.

"and he can take it away in a heartbeat until the debt is paid." Balar growled.

"You fear death so much?" Luna said.

"Not my own." Balar replied, "Our souls are bound, if I die she..." he could not bring himself to say it.

"We are bound and at his mercy." Tiella said.

The Troll tore into the flesh of its dead companion as Harlequin peered down at it. It looked up and sniffed the air giving a low growl and then a whimper before shuffling back from its meal.

"Run along now." Harlequin commanded, and the beast turned and fled into the night. He then knelt besides the corpse of the dead troll and plunged his hand into its chest. The creatures heart came away easily in his grasp. He travelled then, a brief flicker of shadows and a sudden lurch of reality and he was standing amidst the carnage that was the common room of the Hangmans Noose.

"Now where did I put him." Harlequin murmured tapping his chin with a bloody finger. "Ah!" A flash of movement had he stood above the corpse of Borrs. He reached down then and thrust the trolls heart into the hole in the mans chest. Nothing happened for a moment and Harlequin walked over to the bar. He reached for a tankard and dipped it into one of the open barrels.

Behind him the man that was Borrs began to stir. Harlequin took a swig of the ale and turned to see his mischief at work.

"Disgusting stuff. Do people actually pay for this?" he mused as Borrs clambered unsteadily to his feet. The wound on his chest was already closing and the surrounding skin was a mottled grey and green.

"W...what happened." Borrs asked as he peered around the room.

"I fixed you." Harlequin announced with a flourish, sending the ale flying across the room. He threw the tankard over his shoulder and walked towards Borrs. "No need to thank me."

"You... you killed me!" Borrs accused grasping at his chest where the wound was now totally healed.

"Did I? how careless of me. Well all is well that ends well that's what I say."

"You killed me and... I feel different what have you dont to me?"

"I have made some improvements." Harlequin said with a shrug. Borrs roared and it sounded more troll that man. His eyes were thick with blood and the mottled troll skin was spreading across his body.

"The inn keeper and his new friends have been given a task and now I have one for you."

Borrs roared again and this time blood and drool poured from his mouth as two nasty looking fangs protruded from the gums.

Borrs sprang down onto a nearby corpse and began to feed.

Continue story
< Prev : OOC - Back and Better than Ever! Next > : OOC - Cars and Racing