OOC - Beyond the Ragnarok Chapter 14

The Road To Treno 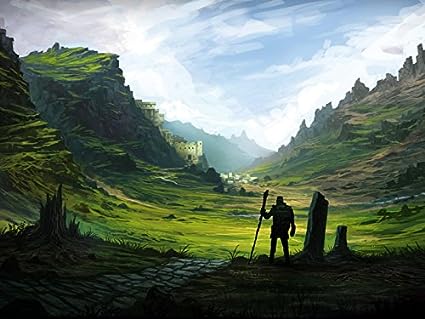 Erik’ s crying out in his sleep woke Luna. Her staff was quickly at the ready in one hand and a ball of shadows in the other. “From the sound of it you had a nightmare. What was it about?” she said. The magic in her hand dispersed harmlessly now she saw there was no immediate danger.

"Thank the g-", Erik shook his head, a hand to his temple. "Thank the ancestors, I was afraid I harmed someone."

Looking at a worried Dyvia," I told you, active dreamer."

Then turning to move farther away, found Kespin in front of him, squinting intently.
"Fascinating." Is all he said before moving back to the fire.

Balar relaxed his grip on his axe. When the giant had risen moments before he had been sure they were under attack. The roar of terror and rage the Jotun had let out had been deafening.

"I suggest we break camp." He said, "We are an hour away from dawn and if we start now we can make the walls of Treno by midday."

"Sounds good to me." Majvok murmured reaching for his pack.

"Erik." Tiella said as they all moved to break camp, "do you have some kind of cloak to spare, I suspect our young Elven friend dislikes walking under the light of the Sun."

“I’ll be fine” Luna snapped and moved to leave camp. Stopping long enough to cast a glare at Kespin.

"I have a few cloaks that should fit you just fine."

Erik reached into a small bag at his side. He handed it to Tiella,"It seems best to leave her to her own at the moment. Given last night I can understand."

He cast a quick glance at Kespin. Dyvia shouldered her pack and walked up beside Erik,"I expect you to make good on our agreement Tiella, I want to know EVERYTHING about that blade."

Kespin was up early and ready to go. His small bag slung over his shoulder and a leaf protruding from his mouth, he hummed a tune that seemed older than him. The party watched him peculiarly as they broke camp. He walked around the camp separating the outer bushes with his hands and searching as if he had lost something. Every now and then he would stop his tune and say "Nope, not there." then begin humming again. He turned to address Balar and the group.

"Well, if we are to travel to this place you speak we should begin our journey. It will be wondrous to visit a villa I have never been too." He clapped his hands excitedly and looked at the giant.

"If at anytime fine Jotun, you would like to carry me on your shoulders I would greatly appreciate it. For you are tall and we are small, so watch your step and do not fall"
Kespin sang the last part to the group.

It was around mid morning that the companions found the ruins of the merchants wagon. The horses lay slaughtered and half eaten on the road and the wagon lay on its side a mess of splintered wood and canvas. Dry blood stained the ground all about and there was no sign of the merchant himself.

"What did this?" Tiella mused.

"My guess is Trolls." Balar said as he walked closer to the wreckage.

Majvok darted past them and started sorting through the wagons goods, looking for loot.

“Why am I not surprised. Let’s just Keep moving the sun burns “ Luna said taking shelter under the shade of a tree. Her skin already turning a light shade of pink.

"Why did they attack the wagon then?" Dyvia looked at Tiella," I thought they were your little friends or something."

“The trolls are not are friends it was a temporary truce brought on by the Harlequin” Luna growled. She clearly was not happy.

Erik walked over to Luna,"I have a cloak that can protect you from sunlight, it's very light so the heat of the day won't bother you either."

Luna's blatant ignoring of him set Erik into a mood.

"Look, I don't know much about your kind, but it's clear to see that you won't last long in direct sunlight. The last thing we need is for you to grow weaker while you try and act tough." He stepped in her way, holding out the cloak with a firm thrust.

“I will be fine no thank you” she said stepping around him. She rejoined the group. She would have preferred to travel at night but that was not possible. So she would deal with the consequences of being in the sun.

Erik watched Luna walk on, both impressed and bothered by her determination.

"This isn't going to end well." He muttered to himself before shoving the cloak into his pack and joining the group.

Stepping beside Dyvia and Tiella," Keep an eye on the elf. She can't last long in this sunlight."

Balar gave a low grunt of agreement, "I suppose we have to trust that she will ask should she really need our aid."

"But still we will keep watch." Tiella said.

Majvok completed his task of looting the wreckage filling his pack and pockets with gods know what. Re-joining the group he threw a small bag of coins over to Balar. The warrior caught it deftly and drew back the strings to peek inside. He gave a low whistle.

"You turning over a new leaf?" Balar asked.

Majvoc shrugged. "We are going to a city and we need coin."

"What is your plan to enter the city? I don't believe they will accept Luna." Erik mused to Tiella, "I am supposing I will stay outside?"

Looking towards Luna, he took note that she wasn't looking the best. On the opposite hand, Balar and Majvok looked better than ever, even Kespin was keeping to himself for once. It was all calm. It didn't feel right.

Kespin rummaged through the merchants wagon as well. There wasn't too much to work with. He found a stiff hard shaft that was used for holding the canopy. He held it next to him and looked as if he was measuring it.

After he made his third circle around the group he stopped at the wagon again. Humming the song he had began that morning at the camp he pulled out some pieces of wood and part of the wagons canopy. He was attaching the pieces together with some sort of other material found from under the busted up seats of the wagon.

After a short while he called out to Erik.

Unhappily and uninterested in the little man, Erik walked over to him. Kespin jumped up to try and whisper to the giant a couple of times, but realizing it was a moot effort he just spoke quietly.

"If the shadow talker will not accept your cloak, and will not want aid for just herself, will you be so kind as to hold this above us all to shade us on our journey?"

Erik looked at what the little man had created. Using one hand the giant lifted in the air what looked like the rattiest and most awkward looking parasol any of them had ever seen. Kespin just stood looking proud, one hand on his new staff and the other on his hip.

Erik held the thing above his head for a moment, then bringing it back down, looked at Kespin.

"You propose that I hold this up for the whole trip?" Looking at the old man grinning like a fool, Erik begrudgingly found a way to put it on the head of his hammer, creating a similar effect, given within its shadow.

At this, Kespin's smile dropped to a frown. "That is not what it was made for. I thought you were a smart Jotun." Erik watched the man continue grumbling, rolling his eyes at the curious man.

Sigrid stood amidst the ruined grove as her people inspected the corpses littered upon the ground. They had followed the wagons trail to this place leaving half of their number behind to repair the smouldering ruin that was their camp.

"All of the bodies are trolls," one of the bandits reported, "and there was something else here something big."

She had guessed as much by the shattered trees. One of them had even been uprooted and thrown accross the road.

"And what of the wagon?" She asked.

"The merchant travelled on towards Treno at pace." The woman said, "and there are other tracks leading north through the grove. Perhaps the party went on foot from here."

"Perhaps." She mused but either way they would end up in or near the city, or some of them would. They had taken her pet smithy, they had denied the Old gods their promised sacrifice and they had brought trolls into the Hoff itself. By all the gods of all the nine worlds they would bleed for that, they would bleed and they would die.

"We head for Treno." She gave the order and within moments they were back on the road.

Continue story
< Prev : OOC - Formal Greetings! Next > : OOC - Last Day to Submit a Quote for the QoM of June