Nila, Osman and Erikson pushed the four wheeled fishing crane to the coastline. It was a slightly rusted yellow metal machine, on the side there was a Caterpillar Inc logo neatly stamped on the surface. "Boss, when did you last use this piece of shit?" Erikson asked.

"Twenty-one-eighty..." Osman paused for a moment. "One!" he nodded to himself fairly certain he was correct. He connected his data-pad to the crane's serial input, the wire was chunky and badly developed, but it did the trick.

Nila walked over to Osman and glanced over his shoulder at the pad. "How much can she lift?"

"A couple of tonnes," Erikson said as he attached the net to the hook of the crane. "Not too bad but in this shape I will be surprised if it can lift a grain of sand."

"It'll work!" Nila said confidently, she tossed a canister of water displacing spray to Erikson. He stumbled forward as he reached out to grab it.

"Sorry man, didn't mean to." Nila quickly apologized, then turned to Osman with a slight grin.

"Ready to go boss!" Erikson announced. Osman looked up and nodded. He activated the crane with a switch on his data pad, it carefully lowered the net into the waters below.

"I'm so excited!" Nila smiled. Osman and Erikson both gave her a confused look. "Aren't you excited?"

"I'll tell you what I'm excited for Nila, being back at the office and not being on this little field trip of yours." Erikson smirked. He could see some movement in the water. They waited a few minutes when suddenly-

"Raise it!" Osman shouted, the quadricycle crane loudly rumbled as it lightly shook the earth beneath their feet. The large net arose from the depths of the water, it held a few different species of native aquatic life. The fish shook and some were fortunate to slip through the nets and return to their home waters.

Nila pulled large gloves over her hands as her co-workers cut open the net. "Let's take a look!" She went on her knees and picked up one species of fish, a sort of Cichlid type creature, very common to these waters. "A Neogudgeon?" Nila held the lifeless fish in the palm of her hand.

"What the fuck is that?!" Erikson cried. Quickly Nila and Osman ran over to him, a beastly looking fish was flopping around.

"I've never seen one of those things before," the boss replied. Erikson tried to grab it but without a moment to waste the sea monster closed its jaws around his fingers. He shrieked in pain. Blood dropped from his fingers and mixed with the damp coastal soil.

"Motherfucker!" He continued to screech in pain. Nila pulled some bandages she had on her, wrapping them as fast as she possibly could around her friend's injury.

"You damn idiot Erikson, what the hell were you thinking?" Osman snarled.

"Well you should have payed some god damn attention, I'm never going to hear the end of this bullshit now."

"Both of you stop!" Nila interrupted. "Osman neutralise that specimen, Erikson shut up and chill out." The both of them fell silent and went right to what Nila had asked. "How is it now?"

"You'll be okay man," Nila patted Erikson on the back and helped him up. Osman injected the sea monster with a synthetic sedative, it knocked it out almost instantly.

"Well we'll need to hand this thing to a colony xenobiologist and they can tell us what they learn."

"I found it so I get to name it," Erikson sulked.

"Fine it'll probably need company approval but what do you want to call it?" Osman sighed.

"Just Sawtooth will be fine I think," Osman said. He took Erikson from Nila and placed him on the passenger seat of the cart. "Can you get our friend Sawtooth over to the necessary location please Nila?"

"I'll be right on it," Nila said holding the knocked out Sawtooth in her hands. "Take care of him Osman!" She ordered. 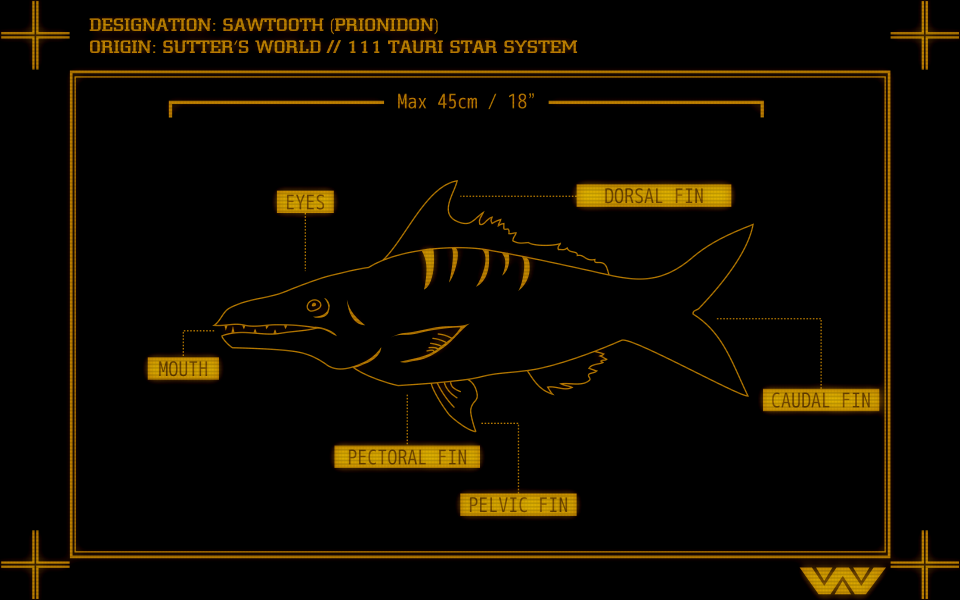 Continue story
< Prev : Fish Heads Next > : Good For The Company