While staying with the Grey Mouth Tribe, Hunter managed to notice that the Grey Mouth are likely in their low hundreds and that any men or women can fight. He also saw that they use spears, bows and daggers as their main weapons and are excellent riders. As for their language he noticed it was made up of quick tweeting sounds. he figured the Scholar would record it better since he was restricted in his movement from the wagon.

Once the holy woman was able to make a deal with the Grey Mouth with the contents of the wagon for 20 horses and 40 caribou, they were able to make the long ride home. Heading back was a bigger hassle since they had to wrangle the herd of horse and caribou through the dangerous dirt road full of predators. Hunter used that opportunity to minimize the time he had to spend with the others, since he had to protect the herd from predators. It was a good thing he did since he had to kill a few predators along the way. Of course he collected the skins and edible meat to keep the group in good spirits since a few of them were not used to roughing it. To lure other predatory away from the group he would use the non edible parts of his kills as bait. Since animals prefer an easy meal they don't want to waste energy for a hard kill when a free meal is already available.

Eventually they arrive in Ostiarium, the Gate City and deliver their goods to the staff of the Duke. Hunter was exhausted at this point and wanted a bath and to sleep. He had been getting 3 hours of inconsistent sleep during the whole trip. He was also concerned what Voah would do now knowing his true background. He was concerned she would blackmail him or simply rat him out to the Duke for a favor. If that day came he might have to vanish into the wild away from humanity. He hoped that day would never come but he was not foolish enough to think it not possible. As a trained killer, knew others would like to use him as a tool again.

Once he was free from his obligations he made his way to the nearest river or stream and washed up real good. Using a small campfire he dried his clothing and then hunted some rabbits. He then set up some traps so he could take a break from hunting. Seeing as he had some free time he decided to go into town for some food at the stalls. It was then that he noticed the twins approach him from both sides. They seemed in better spirits and were looking a bit healthier now, he figured they were back on their feet again financially. Then they invited him to eat at their stall while hooking their arms onto his to keep him from leaving as they smiled ay him playfully.

Seeing as they really wanted his attention, he complied and ate their seasoned meat skewers. He was impressed that they managed to improve their seasoning and they told him they found a new cheaper season to use which was popular with their customers. Hunter was curious and asked about it, but the coy twins were not surrounding that info anytime soon so they invited Hunter to "talk" about it at their place. Well one thing led to another and he gave in to their temptation. 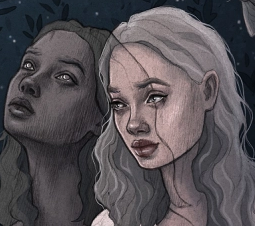 Well one night with the twins became a habit and Hunter soon found himself spending more time with them. It was an odd relationship in that they talked to him and found him a good listener. However they barely asked him anything about his past. They only asked for simple things like lighting a fire, hunting meat once in a while and helping them relieve some stress at night since they got lonely. So when Hunter was not training, hunting, tanning skins or doing work for the soldiers, he was visiting the twins. So as Winter made itself present with cold winds and heavy rains, Hunter could only hunt with his traps so he found himself working more in the tanneries. Furs were very important in making warm clothing and blankets for the winter. Of course he still trained regardless of the weather, but he wore the proper clothing to prevent from getting sick. As time passed Hunter wondered if his peaceful life would continue or would someone muck it up.