View character profile for: Till 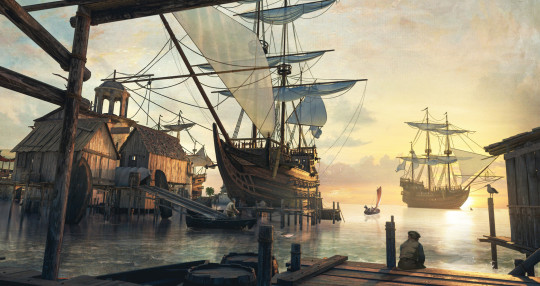 Ostiarium had woken to the excited and frantic shouts from the guards in the watchtowers. The ships had been sighted in the horizon. The small settlement rose in anticipation and a bit of delirium ensued.
Once a year, before the passage through the Sea of Storms closed for the winter, ships from Salos brought much needed supplies, medicine and news from home. And more souls for their fledging community.

Elsewhere in the city foremen and workers gathered around the docks, getting ready to start unloading the vessels. They would have to work fast, as the ships would be leaving within five to seven days and the ships could not return empty. Their holds would need to be filled with the ebony and heartwood timber found in the forests around the Bay of Pearls, that had been cut and processed in the lumber mill, just beyond their growing farms.

The settlement needed to show the Empire it could be profitable otherwise there would be no needed for the yearly trips. And they would be abandoned.

Sir Eudon Zane walked towards the pier as the mid morning bell tolled. He bit into a spiced vegetable pasty he bought from one of Suncross' many stalls. He had a splitting headache. Too much of the white spirit, fireclap last night, again. He shoved the rest of the pie into his mouth and wiped it with the back of a calloused hand.

The sun was shining but the weather was turning cold. Soon the rainy season would be upon them again. Up ahead he saw the tall, skinny figure of Friar Jassin Balvaris. The Friar had been in Ostiarium since its inception, three years ago and ministered to the townsfolk from Kupen's modest shrine in Suncross' square. He was attended by a handful of acolytes in his mission.

"Morning Friar..." the knight grumbled walking slowly behind the tall, lanky man. The Friar did not look back and kept his eyes on the nearing ships. He could see the apprehension in the man's semblance. If the messages they had received from the ships, dispatched by pigeon, a week ago, were true he could be loosing his prominent place at the heart of the settlement.

"The Lord Commander asked me to brief the Arbiter tomorrow. So maybe you could be a bit selective on what you share." he told the man while wondering how her presence could affect their survival in the coming year.
"Are you asking me to lie again, Sir Zane?" he sighed deeply. "You know I cannot take any chances with one such as..."
"Friar, the Odsier tribe is moving south again to their winter pastures, following the herds. In a couple of weeks or so they will be crossing the plains beyond the forest. We don't need anyone starting a crusade because of some unfounded rumours and primitive rituals."
The Friar nodded. "I will see what I can do, but you must come and see them urgently."
"I will come and see the Arbiter and debrief them myself. Tomorrow in the Misty Ward. After morning prayers. Until than show them to their quarters and to a hot bath. I'm sure they need one." he said and moved away.
Friar Balvaris looked at the Knight for the first time not looking forward to tomorrow at all.

The Knight of Salos also took the time to speak to the foreman in charge and the sergeants from the Colonial Army. Most of the new arrivals would be separated by skillset and assigned to where they could be of more use in the coming months. There was no place for idle bones in such a precarious settlement.

He looked at the note sent to him by one of the minor Lords that paid his family tribute back in Bloodstone.
He wanted to get the measure of this Wim Riese before deciding what to do with him. He did not have the time to babysit anyone. Not with the shit storm coming their way. But hopefully he would prove useful...

Continue story
< Prev : Upon Wind and Sea Next > : No more ships, no more travels, no more....swindling?