When she awoke, Cass found herself sprawled amid broken glass on the cold floor in semi-darkness. There was the smell of smoke in the air and, nearby, the sound of someone coughing, or crying, she couldn’t decide which.

Confused, she rolled over and pushed herself unsteadily up, onto her feet, the floor beneath her shuddering from some distant impact or aftershock – An explosion, maybe?

The room she found herself in seemed to be a bar of some sort, but given the smoke cloying the air, it was almost impossible to discern its size. Bodies lay scattered everywhere.

What had just happened?

Coughing and retching on the smoke, Cass willed her legs to work and lurched dazedly towards the exit, stumbling out onto a mezzanine walkway above a wide open space, lit from above by starlight.

Meanwhile in the hanger bay Evelina Stone woke up in a Starbug with a pounding headache. As she looked around she saw some other people laying near her. As she slowly regained her composure and her vision cleared up, she recognized the women around her along with several empty beer cans and liquor bottles. They were her best friends from her past and she remembered they often played drinking games in a Starbug to hide from the CO.

Among Eve’s new best friends were: Ruby who was a bit of a tomboy and a great mechanic, Stacy was a pretty communications Ensign who loved tattoos and body piercings, Rhonda was a very masculine woman and a great pilot and of course Tammy the practical joker who was a JMC scientist.

Evelina was shocked to see her long lost friends still alive and sleeping off a drunken binder as they slowly woke up with hangovers. By the looks of things they were in pretty bad shape considering how many empty alcoholic containers were on the floor. Ruby rubbed her sore head as she looked at Evelina.

Ruby: Hey Eveie how do you do it?

Evelina: Huh? What are you going on about?

Ruby: No matter how many benders we go on you still look hot when ya wake up.

Evelina: Are you hitting on me?

Ruby: Don't tempt me Eveie, you're a might better choice than most of the smeg heads on his space heap.

Tammy: Well most of the single ones at least.

Stacy: Too bad the good ones are already taken.

Rhonda: Keep it down. My head is about to burst.

Stacy: So is my bladder. Lets get cleaned up ladies before the CO finds us.

The ladies managed to clean up their mess and find a washroom before heading back to duty. After a good shower, several anti-pain pills and a quick goodbye, they headed to their various stations. Evelina's head was was still sore as she headed to the Navigation station. She was once again dawning her JMC uniform.

Normally most women lost their sex appeal in the hideous JMC uniform, but Evelina being a GELF model looked great in anything even with a hangover. As she was walking towards the bridge the alarms came on followed by an announcement on the speaker system.

Evelina quickly found herself rushed by the security and medical staff members as they forced her to help them carry supplies along the way. As Evelina helped the medical staff carry their medical supplies she saw several men carrying stretchers out of the Starbugs with wounded armored men on them. Even though she could not see their faces through the helmets she could see the damage to their armor was horrific. Some were missing limbs while others had rather large holes in their heads or torsos. It was then that Evelina recognized the armor was that of the "Canaries" 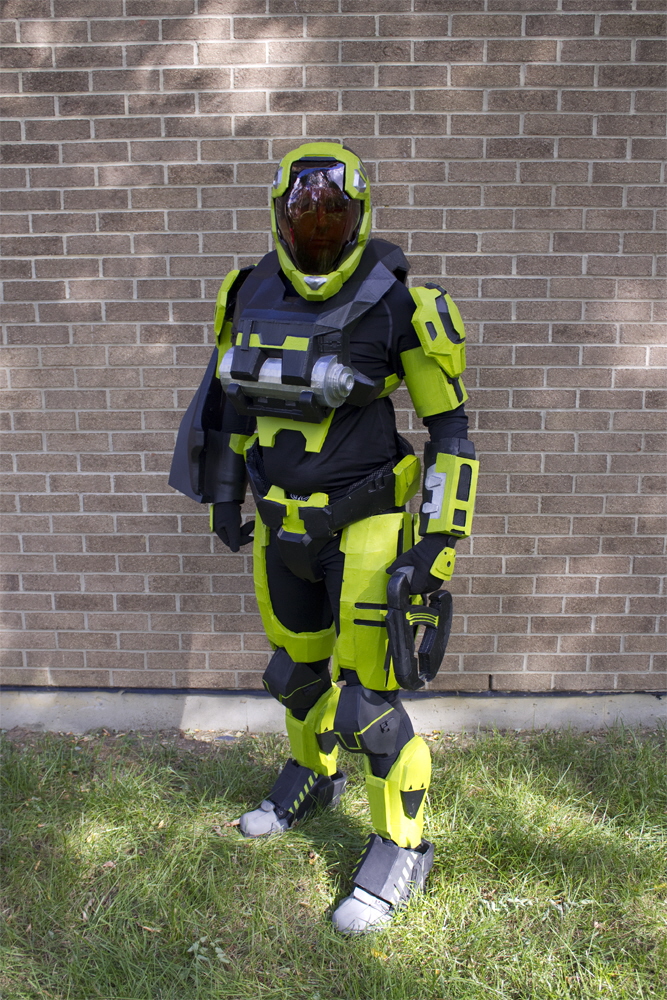 She was sad and remorseful for the poor souls that were near dying before her. Then she saw something that almost made her heart stop. She saw a different colored armored marine being carried out of a Starbug. Unlike the yellow armor this armor was black with blue and silver trim. Her jaw dropped as she recognized the armor and quickly approached it to confirm her fears. As she saw the logo patch on the arm she cringed as she recognized the M.A.C.O. (Military Altered-Human Combat Operatives) (which are part shark and part human marines), patch on it. She felt relief as she saw the rank was that of a Private Saxx. Though she could not see his face she she knew something was different about her being on the Blue Dwarf this time. Everything was out of sorts for her as she feared the worst case scenario. She continued to check every M.A.C.O.'s rank ID patch hoping to find one in particular among the ten scattered available. After an hour of searching and assisting she failed to find the one she was looking for. Tired and exhausted from helping out the rest of the staff she sat down on an empty medical crate and rubbed her aching temples. The medical and security staff slowly escorted the wounded to various medical bays while Evelina was lost in thought.

Then one more Starbug arrived and her heart began to race as she heard it was full of the dead bodies. Her body trembled as she watched helplessly as the bodies were unloaded from the Starbug on stretchers. She watched as twenty plus Canaries were first unloaded before two additional M.A.C.O.s were unloaded on stretchers. She bit her lips as she couldn't identify the insignias on their chest since they had a hole through the armor and body. Tears began to roll down her cheeks as she assumed the worst case scenario. She covered her mouth with her hands as she was on the verge of a nervous breakdown.

Security Officer: Is that the last of them?

Security Officer: Master Chief, make sure make you report to your lab ASAP for your check up and report.

Evelina's body the familiar surfer voice froze as she heard coming from inside the last Starbug. She slowly turned her head to see a fully armored M.A.C.O. standing on the steps of the Starbug with a hole cracked through the top of the helmet. As she looked at his chest she saw the rank of Master Chief but the name was scratched off. The M.A.C.O. looked at her and paused for a moment as he took off his damaged helmet. 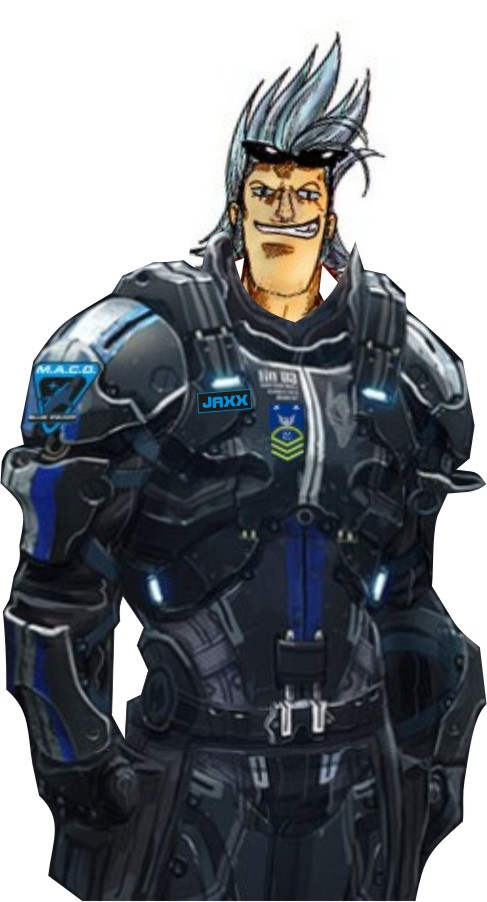 She trembled as she saw his face emerge from the badly damaged helmet. Once he took off his busted helmet he shook his blue spiky hair and much like a shampoo model in a commercial before looking back at her with a big goofy smile.

Jaxx walked up to her and kissed her passionately as he held her close. She lost all manner of control as she embraced his affections once more. The two held each other for a few seconds before a Security officer interrupted them and insisted Jaxx check in with his CO at his lab. Evelina walked with him as they were being escorted back.

Evelina: Do you know what's going on?

Jaxx: It's a totally long and heinous story Evebabe, but ta make it quick we are at war with a race we call the Devil Beetles. They are a most harsh and violent and they totally insistent on wiping us off tha map and stuff. Its been rough protecting tha nearby human colonies. Evelina: So you fought them before?

Jaxx: A couple o times, but that ain't important now. Evebabe I need you ta stay safe and find the others while I report to tha lab. They won't let ya near me in there so ya have ta be patient ok?

Evelina: But I just got you back.

Jaxx: Chill Evebabe, I'll look ya up when I finish my report. It's totally top secret and stuff.

Evelina: (sad sigh) Promise me you will find me and tell me what's going on ok?

Jaxx: (kisses her lips) Will do Evebabe.

As the Security Officer escorts Jaxx to the M.A.C.O. labs Evelina fidgets as she watches her husband disappear down the halls. She sighs as she heads back to her station in the command deck. Once she arrives she gets an earful for being late to her station despite her explanation. She remembered how in the past GELFs were basically second class citizens and now was no different. After her stern lecture she took her seat at her station and looked to see where they were. Then she decided to look up the JMC news on a different panel to see what current events were happening. Several articles came up on the invasion of the "Devil Beetles" and many humans were bickering about the best solutions to deal with them. Most of the articles were rubbish but it did give her a better idea of what was going on. Now she had to find the rest of the crew and let them know she found Jaxx.

Continue story
< Prev : Jaxx Abroad Next > : We Need You!